Captain Pender goal wins it for the Clarets

Having called off the game at York on the previous Tuesday, Burnley were back in action on this day in 1992 with a home game against Halifax Town as we looked to get back on top of the league.

One poor Burnley man was jailed for three and a half years after the judge at Preston Crown Court described his offence as a drunken contempt of authority. David Berry had been on what was described as a heavy drinking binge in Burnley which led to him throwing a petrol bomb at the outside of Burnley Police Station. A police sergeant heard a loud bang, followed by seeing flames at the entrance. Mr Alistair Webster (defending) told the court: “It was a childish urge to cause inconvenience and alarm, but not with the intention of causing injury or serious damage.” Although Judge Jolly said he was giving the sentence with an element of deterrent in it, the court was told that Berry was currently midst-appeal for a robbery at a Burnley sub post office for which he had been sentenced to ten years imprisonment. 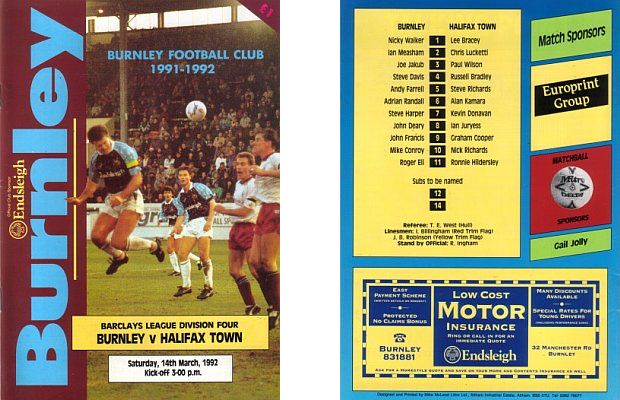 It was Burnley v Padiham in this week, but not a pre-season friendly or anything like that, or any other match at the Arbories. This was a late night feud between rival groups of youths that kicked off in a late night street disturbance. Solicitor Mr Philip Turner, representing six of the Padiham group, said it was a bit of a pow-wow but that they were all now friends who visited each others’ homes. He also said that the Padiham boys were in their own area when the Burnley youths arrived by car looking for trouble. A couple of the lads were sent to an attendance centre for 18 hours, others received community service while one juvenile was to be sentenced by Burnley Juvenile Panel. I doubt they all shook hands as they left the court.

It seems to be all court cases this week and another Burnley man Paul Buckley faced the magistrates because he thought, on changing car, that he could transfer the tax disc from one to the other. Former Burnley Football Chairman was prosecution in the petrol bomb case; here the defending solicitor was former Burnley Cricket Club chairman Peter Lawson who told the court that his client was: “Very sorry for the foolish way he’d behaved, but he had been under the impression that it was possible to use a tax disc for one car in another if it was still valid.” Buckley had also bought a vehicle test certificate from a man in a pub. Lawson added: “He realised that it was completely wrong to have bought the test certificate.” Buckley was fined £100 for the offences.

This gives me the opportunity to mention both John Jackson and Peter Lawson, two people I knew and liked for many years and it was so sad to see them both pass away prematurely from very similar illnesses.

When you move to a new town then you like to make an impression with your new neighbours and potential new friends. Johnnie Field arrived from Portsmouth and moved into a house in Parkinson Street in Burnley Wood. Within no time of moving in, he’d twice been the Johnnie on the spot, making calls to the fire brigade to alert them of house fires in the street, the second of them at his own house. The only problem was, there were no fires and poor Johnnie found himself in court charged with making false calls to the fire services. A probation officer suggested that his actions were a misguided attempt to ingratiate himself within his new community. The court was told that he’d been made the subject of a two year probation order at Portsmouth for similar offences and had come to Burnley to make a fresh start. He was conditionally discharged for twelve months.

Moving on to sport, Burnley Cricket Club revealed that their 1992 professional would be Barbadian fast bowler Sam Skeete who, it was said, was close to the West Indian test team. I bumped into former Burnley wicket keeper John Richardson that week who told me that when he heard the name he thought the club had signed a third rate American private investigator.

Next door, the club was still in mourning following the death of Ben Lee. It was confirmed that he had fallen to his death while trying to retrieve a ball from the Longside roof that had been used in the recent schoolboy international. He recognised it as the type used by Manchester United, the club he supported.

“During his normal cleaning duties at Turf Moor on Monday, March 9th, Ben Lee decided that he would retrieve, as a souvenir, a special ball which had been lodged on the stand roof during the recent schoolboy international.

“Despite warnings from his friends, he climbed onto the roof, and sadly fell through a panel in the roof.

“Warning notices are posted on the wall at the point where he climbed onto the roof.

“Despite unfounded reports to the contrary, it must be stressed that the accident did not happen during a training session.

“All players and everyone connected with the club are devastated by the tragedy, and extend their deepest sympathy to his family.”

The players and staff were deeply affected by it and an extremely emotional Jimmy Mullen said: “Ben had only been with us for a short time, but he had made a big impression, and losing him in such tragic circumstances has been a devastating blow for us all.

“The time I spent with him after his tragic fall and the time I later spent with his parents on Monday was one of the most difficult experiences I have ever been through. It really was a tragedy and an horrific shock to everyone who knew Ben and respected him both as a young man and a very talented footballer.”

The inquest had opened and his father Mr Richard Lee said he and his family had been so grateful for the sympathy and support they had received from Burnley, the club, the supporters and the town.

Burnley, still so badly shaken, got back to action against Halifax having dropped two places in the table with the York game having been called off. Ahead of our return to action, Mullen said: “We may have been knocked off top spot, but our games in hand mean we are in excellent shape, as long as we can carry on winning. Our destiny is very much in our own hands. We have just got to keep our feet on the ground and build on the good habits we have developed over the last five months.”

Both Steve Davis and Joe Jakub were rated doubtful. As it turned out, Jakub played but Davis was ruled out with Andy Farrell again dropping back into defence alongside skipper John Pender. Roger Eli was also missing through injury and replaced by Graham Lancashire.

An impeccably minute’s silence was observed ahead of kick off on a day when Burnley weren’t at their best against lowly Halifax, but again Farrell deputised well alongside the excellent Pender who turned in a match winning performance at the back to which he added the only goal of the game some twenty minutes from the end.

The problem we had was Halifax moving the game into midfield as much as they could where they got the better of John Deary and Adrian Randall and they nearly had an early lead only for Nicky Walker to keep out their effort. Randall then went on a long run before releasing Steve Harper down the left and his cross was headed past Halifax keeper Lee Bracey only to see the ball come back off the crossbar.

As the game went on, Burnley began to get more and more on top. Just past the hour, Randall forced a great save out of Bracey but soon after we won a free kick. Deary floated it into the box where PENDER met it with a looping header which crept in just under the bar.

Rather than seal a win for Burnley, it spurred on Halifax. Walker saved well from Tony Gregory and then did even better to keep out the same player. Next time they got the ball into the box, Farrell came to the rescue after Walker had dropped the ball. Conroy and John Francis both missed chances but right at the end, Paul Wilson, who would join Burnley a year later, set up Nick Richardson. Somehow he shot wide and the points were ours.

It was a day when the top five all won, leaving us still third in the table, one point behind both leaders Blackpool and Mansfield but with two games in hand. Blackpool had won at Scarborough with Mansfield beating next to bottom Doncaster.

We had an Autoglass Trophy game to come before travelling to Mansfield for what was being billed as the game of the season.