Champions of England – A Century Ago 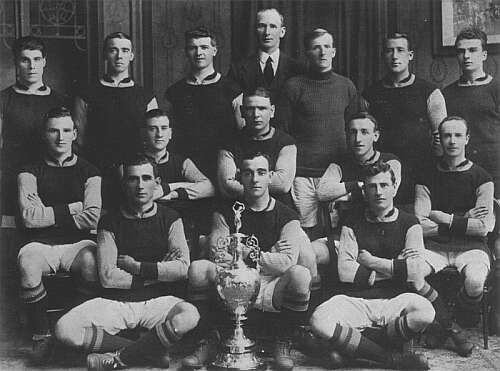 On this day in 1921 Burnley drew 1-1 against Everton with Benny Cross scoring the Burnley goal, but this was no ordinary draw, no ordinary goal but the point that crowned Burnley as champions of England for the first time.

FA Cup winners in 1914, seven years and one World War later, we had clinched the league title for the first ever time in a season that, incredibly had started with two defeats against Bradford City sandwiching a third loss against Huddersfield Town.

Three games played, bottom of the league. Were John Haworth’s Clarets facing a relegation battle? That question was quickly answered. We didn’t lose again until Manchester City beat us in late March. By then this team had played thirty successive league games without defeat. a record in one season that was retained until beaten by the Arsenal Invincibles in 2004.

We won the next two games but then, strangely, failed to add any more victories in the final six games but the title was won. We ended the season five points clear of second place Manchester City.

Today we salute those players who were the first to represent our club in a title winning season. Long gone, but these players will never be forgotten by those of us who continue to support our great club.