It was speculation time again at Burnley. Just over a year after his appointment Adrian Heath had moved on to Everton and the club were once again looking for a new manager ahead of the 1997/98 season. 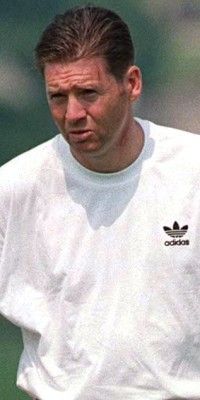 Hearts dropped among the fans within 24 hours of the confirmation of Heath’s departure when we were linked with former Stoke boss Lou Macari. Things soon picked up and by early the following week such names as Ronnie Whelan and Sam Allardyce were in the frame. The fans wanted Joe Royle who had left Everton four months earlier. Burnley did make an approach but he was unavailable because of his compensation claim against the Premiership club.

We didn’t have long to wait for news. Just one week without a manager and news surfaced that the club were keen on former England player Chris Waddle who had ended the previous season as a player at Sunderland. Waddle had been linked with the job some 14 months earlier following the departure of Jimmy Mullen. Over the next few days we had the ‘Come and get me’ pleas from Waddle and after just ten days without a manager he was appointed on a three year deal, bringing with him former Gillingham and Watford boss Glenn Roeder as his assistant.

He spoke positively at his opening press conference about his plans for Burnley, this after being introduced by chairman Frank Teasdale as Chris Hoddle. He said: “It didn’t take long to say yes. This is one of those clubs that has potential bigger than the division they are in at the moment.” Roeder, who was a member of the England coaching team under Glenn Hoddle (not Waddle) added: “I think Burnley are a big club and the division they are in is a false one. We want to get out of this division at the first attempt.”

Roeder could never have known just how close they would be to taking Burnley out of the division, although I’m sure that’s not what he meant at the time. He did have an uncanny ability when it came to comments, and most people in Burnley still recall his references to the manager’s boots, even if the comment was wildly taken out of context.

Burnley fans couldn’t believe their luck, we’d got a top international coming to us for his first job, but he was still playing and surely, at the very least, would be the best player in the division. He also lifted the quality of the squad, or so we thought, with the signings of such as Michael Williams, Mark Ford, Steve Blatherwick and Lee Howey. Ford was only 21, but had already played almost thirty league games for Leeds. Williams was believed to have a bright future as did Blatherwick; they had signed from Sheffield Wednesday and Nottingham Forest respectively, like Ford, both had played in the Premiership. Howey was another player with experience in the top division.

We opened the season at Watford and their manager Graham Taylor commented on the playing pedigree of our manager and coaches when they went onto the Vicarage Road pitch before the game. Besides Waddle and Roeder, back at his former club, there were also Gordon Cowans and Chris Woods, both of whom played for us during the season. We lost that game 1-0 and didn’t start particularly well. We didn’t score a single goal in the first six league games, and we didn’t win until game eleven. From that start we were always going to be struggling near the bottom of the league.

There was an occasional good performance, and the style of play was undoubtedly pleasing on the eye, but the fans were getting restless and in particular over the continued reluctance to play Glen Little, a player who had signed in the previous season and was still to establish himself in the first team. It proved to be a big mistake by Waddle and his number two, one that would be put right just about in time.

Supporters turned on Lee Howey more than anyone and in one match the abuse was so bad that Waddle responded by slamming the fans on local radio. We won that day, against Northampton, with the Burnley fans ironically cheering every move from former Claret John Gayle, but results continued to be poor including an embarrassing FA Cup replay defeat against Rotherham in front of the Sky cameras.

It was becoming desperate but in January Waddle pulled two rabbits out of the hat. He finally decided that Glen Little should have a regular place in the side and then he somehow persuaded Huddersfield manager Peter Jackson to do a swap. They got Paul Barnes, who to be fair had done OK for us, and we got the prodigal son Andy Payton. We lost on Payton’s debut at Bristol Rovers but from then on the results did start to improve. There were set backs but we did start to give ourselves a chance of avoiding the drop. As we moved into the last few weeks of the season we faced teams due to finish in the top six on four successive Saturdays. We won the lot of them and Payton got the winning goal in all four.

We had given ourselves a chance, and we took that chance on the final day of the season by beating Plymouth 2-1 to stay up. We had finally started to look a good team. Players such as Paul Weller and Damian Matthew had been in superb form in the midfield. Andy Cooke was getting goals, and then there were Little and Payton.

Such had been the finish that fans were now beginning to look forward to the next season but just over a week after the Plymouth game Waddle decided enough was enough. He said it was not football related, not financial, but a problem within the club that was not going to be resolved. Given his words without explanation it could be assumed it had nothing to do with him being forced to sell David Eyres and then Marlon Beresford during the season. There were suggestions that he and Teasdale didn’t see eye to eye. There were suggestions that new owner elect Peter Shackleton had got rid to bring in Terry Venables, but the reason was never confirmed.

Waddle had gone, maybe at a time when he had just started to get things right, but no tears were shed, no one craved his return. Waddle’s first and last season in football management had been anything but a success.

« Norris to sign from Wolves
Alex Mac becomes a Gill »