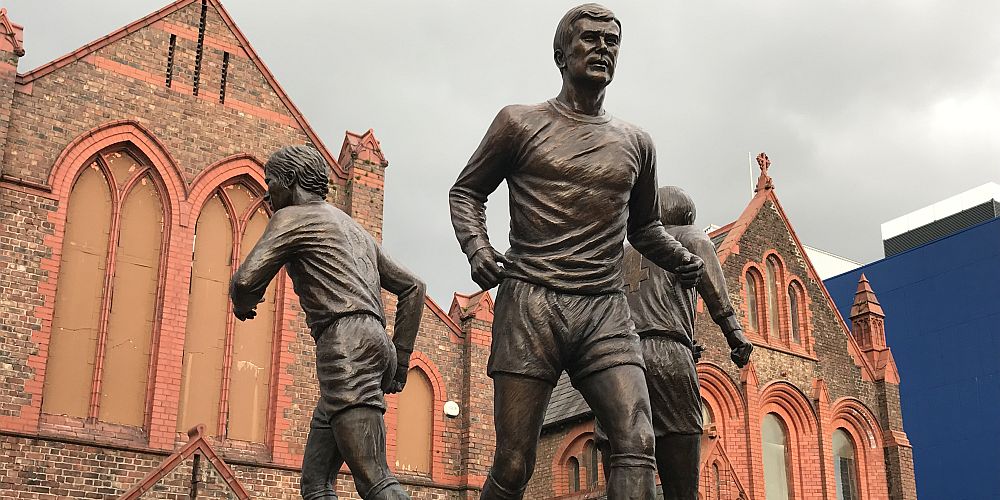 Just over seven weeks after we’d inflicted a first Anfield defeat for Liverpool in almost four years, we returned to the City yesterday and won again, this time on the other side of Stanley Park, beating Everton 2-1 at Goodison Park.

In a sensational opening to the game, we went 2-0 with two superb goals from Chris Wood and Dwight McNeil, could have had more, saw Everton pull one back but, by the end, were so deserving of the three points that have moved us ever closer to safety.

This was the 38th Premier League game we’ve now played that Burnley fans have been unable to attend. I dearly wish I could have been at the Emirates to see our first ever win there, I’d have given anything to be at Anfield when we secured that win, and I’ve missed games at some of the country’s finest football grounds. But, Everton at Goodison is one of my most eagerly awaited games of the season.

There’s no logic. Once there I complain about the view, how poor the ground is. It’s from a bygone age. We won’t play there too many more times before they move into a new stadium at Bramley Dock but these were the sort of grounds I was brought up on and I’ll miss it.

Embed from Getty Images
My first visit to Goodison was back in December 1962 in a season when they went on to win the Football League Championship. It wasn’t the best of days for us. We were 3-0 down midway through the first half with Dennis Stevens, Roy Vernon and the brilliant Alex Young scoring their goals. We did pull one back through Jimmy McIlroy in the second half with what proved to be his final Burnley goal.

I was there in the following season when we ended their long running unbeaten home run. Arthur Bellamy got a hat trick in a 4-3 win and that was the first of just three occasions I’ve seen us win there, the other two in 1976 and, of course, more recently in 2017.

So, no trip to Goodison yesterday, the tired ritual of getting settled down in front of the television having made the decision to have tea before the game rather than after. The television was switched on just as the Burnley players were coming across the car park behind the Sir Philip Carter Park End Stand as the Z Cars theme was blasting out inside.

We’d only scored two Premier League goals at Goodison previously. Sam Vokes netted a penalty in the 3-1 defeat in April 2017 and Jeff Hendrick got that winner in the following season. That didn’t point to us getting past Jordan Pickford too often but what a start we made with a team that showed just the one enforced change from that which started against Arsenal, Erik Pieters replacing the injured Charlie Taylor.

Embed from Getty Images
Before Pickford got anywhere near the ball, his counterpart Nick Pope had a save to make from Richarlison but that opening was not a taste of what was to come. We started on the front foot, we started unbelievably well and were in front with a goal on thirteen minutes.

Josh Brownhill, who played as well as at any time in a Burnley shirt, robbed Tom Davies of the ball on our left hand side and played the ball forward. Wood left it for McNeil who got down the flank and crossed. It deflected off former Claret Michael Keane into the path of Wood who had moved just inside the box. He took one touch before hitting a superb shot into the right hand corner of the net with his second. It really was a terrific finish from Wood who, in scoring, became the second player to reach forty Premier League goals for Burnley.

Long balls? Second balls? Knock downs? Don’t you believe it. We know this Burnley team can play and the football we were playing here had Everton on the rack. They didn’t seem to be able to deal with us at all and should have given a penalty away when Mason Holgate handled a corner. All of the Burnley players in the box went up but referee Jon Moss was unmoved. Surprisingly, there was no change of decision from Martin Atkinson at Stockley Park either.

We didn’t get much time to argue that one. Everton got the ball clear but after a free kick in our left back position we got it forward down the right. Matěj Vydra couldn’t quite get control of it but it fell into the path of Matt Lowton. He quickly returned it for Vydra who this time played it inside for McNeil. He took the ball past Allan, set himself and then hit a wonderful shot right into the postage stamp to Pickford’s right. It was a sensational goal. I know Pickford has his doubters but rest assured, no goalkeeper on earth would have got near to that.

Embed from Getty Images
Everton had no answer and not much more than a minute later we were inches away from making it three. McNeil was involved again, pushing the ball forward to Jόhann Berg Guðmundsson who was so unlucky to his shot come back off the post. Pickford couldn’t have got close but in going down he picked up an injury which close to half time forced him to be substituted.

It all came to a stop just past the half hour when Everton, who seemingly had no response, pulled one back with a Dominic Calvert-Lewin header from a Davies cross. It was his third goal in three games against us. The first had won the game for Everton in last season’s encounter at Goodison and earlier this season he scored their equaliser on the Turf in a 1-1 draw.

“That’s going to make it a tough afternoon,” I thought but it was us who kept going. We might have had another penalty for a foul on Wood. Guðmundsson and Brownhill both had half chances and the only disappointment in the first half is we didn’t come off with a lead way beyond one goal.

Pope started the second half as he started the first with a good save, this one an exceptional stop to deny André Gomes and Calvert-Lewin clearly had something to say to himself when he failed with another headed chance.

Embed from Getty Images
But this was no real Everton comeback. We looked in control and continued to threaten and in a short spell we came close three times to restoring our two goal advantage. Vydra just couldn’t get the ball down to shoot after an error by substitute goalkeeper João Virgínia and he shot straight at the keeper a few minutes later after setting himself up so well. Between those two chances, Ben Mee saw a headed hit the bar.

We had a free kick in a dangerous position that Robbie Brady, on as a substitute, skied into the stand but, that apart, he did a great job down the left hand side as Everton pushed forward. Jay Rodriguez, the other substitute to come on, was also close with a shot after being set up by McNeil.

The third goal wouldn’t come. We did have some defending to do but in truth nothing whatsoever to over concern us even when they threw their goalkeeper up for a corner at the death.

We’d beaten Everton and we’d fully deserved to beat Everton. “Burnley played some magnificent football,” said Alan Shearer on Match of the Day while heaping praise on McNeil. Jermaine Jenas highlighted the performances of the midfielders Ashley Westwood and Brownhill. During the game, Jamie Carragher even made a suggestion of looking like Brazil in our yellow shirts.

Embed from Getty Images
We can wax lyrical about McNeil’s performance, and it would be right to after a performance that finally saw him scored an away goal in the Premier League, but that would almost be unfair on the rest of the team because they all played so well.

I quickly learned that it was the first time we’ve won twice in Liverpool in one season. I knew that was the case in the years I’ve been watching but a quick check proved it to be the case. We’ve beaten Liverpool just nine times away from home in the league. We’d lost five and drawn three at Everton in the same seasons until yesterday we created yet another record for ourselves.

And we’ve doubled the number of Premier League goals we’ve scored at Goodison and we’ve also beaten Everton six times now in the Premier League and that’s as good as against any other team with Bournemouth and Crystal Palace the other two we’ve beaten that many times.

This, I thought, was a very special performance, right up there with the best we’ve given in the last few seasons in the top flight. Everton might be having a little, difficult run at home but they are still one of the best teams in this league this season and yesterday we were far, far better than they were.

It was fantastic to watch, I just wish I could have been there enjoying it while moaning about the view. Yesterday, it was our turn to celebrate, we were the grand old team to play for.