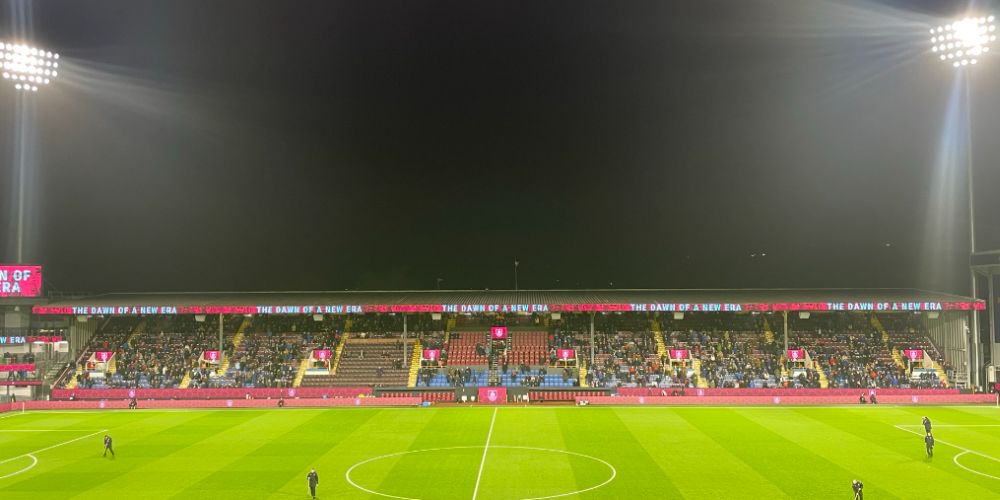 Two goals from substitute Anass Zaroury took Burnley to a 3-1 win last night against Crawley Town and into the fourth round of the League Cup for a third successive season.

This was Crawley’s first ever visit to the Turf; our first ever game against them and we gave them a proper Burnley style welcome with a biting cold wind and no shortage of rain. It left me arriving at the Turf uncomfortably wet for the first time this season, although I suspect not the last.

We expected team changes from Saturday’s game at Sheffield United and we got nine of them with only Samuel Bastien and Manuel Benson in the starting line up as players such as Matt Lowton, CJ Egan-Riley, Luke McNally, Dara Costelloe and Ashley Barnes were given an opportunity.

I knew little about our opponents. There were few names I recognised although both Aramide Oteh and Caleb Chukwuemeka were familiar having scored goals for QPR and Aston Villa in the under-23 leagues we’ve played in. I also knew about Dom Telford, their Burnley born striker, although on a club interview their interim manager Lewis Young was confused and said Blackburn.

Embed from Getty Images
Knowing little about them, or the way they play, I wondered how they would approach this game. It soon became very clear that their one main intention was to get men behind the ball in an attempt to stop us from playing.

For the first twenty minutes or so, it was looking as if it was just a matter of time before we scored. Most of the game was being played in and around their penalty box. Lowton saw a shot saved by goalkeeper Ellery Balcombe and Barnes should have scored but his shot went over the bar when, from my position in the stand, I’d have thought he’d have gone for it with his head.

A goal just had to come against a side who were presumably hoping for a 0-0 draw followed by a bit of luck on penalties. That goal finally came but not in an expected way and not at the cricket field end as we’d all expected. Luke McNally, playing at the Turf for the first time, hooked a left footed shot over the bar. Balcombe’s long goal kick found Telford who did so well to control the ball before hitting a left foot shot past the helpless Bailey Peacock-Farrell.

It stunned us although they had tried it previously. I suppose the one good thing was that they couldn’t play more defensively than they already had. From our point of view, we knew that the longer we were behind, the more frustrated we’d get.

Embed from Getty Images
Thankfully, we weren’t behind for long, no more than around two minutes. I don’t think Crawley had touched the ball since Telford’s goal, and after looking for an opening, the ball finally reached Charlie Taylor on the left and his ball into the box was met by Barnes who scored with an excellent looping header.

There were more than twenty minutes until half time as the game restarted at 1-1 and I’m not sure Crawley came forward again. We just simply dominated and at least twice came close to scoring with Balcombe saving from Benson and then only able to watch as the same player hit the woodwork with a deflected effort.

I know we are a possession based team but even I was stunned at half time to learn that we’d had 87% of the possession during the first half. If it had been a boxing match, it would have been stopped, but there were Crawley, still level as they’d been at kick off

Nothing much changed during the second half, or for most of it. It was all Burnley but credit to Crawley, they defended in numbers and they defended well and I was beginning to wonder whether they would see it out and take their chance with spot kicks.

Embed from Getty Images
With almost an hour gone, we introduced Josh Brownhill and Zaroury but the frustration continued. Balls flashed across the box with us unable to get that final touch. Crawley, at times, were just hanging on. I’d reached the point where I thought we weren’t going to do it but was told from my left that we would. I should have believed him, a week earlier he’d told me we’d equalise and then go on to beat Rotherham.

There wasn’t much over ten minutes remaining and, finally, we got the goal that surely ensured victory. Benson, double marked again, got past both defenders, the second one somewhat fortunately. He got the ball in from the right, Barnes flicked it on for Zaroury to come in at the far post and score from close range.

Crawley had to come out now. They did get forward finally, probably for the first time in the second half, but we were close to adding a third when Barnes turned a Jóhann Berg Guðmundsson cross in only to be ruled offside. But in the final minute of the ninety, we ensured a place in the next round when Zaroury scored his second and our third. Egan-Riley sent Vitinho, who had just come on, down the right and his ball along the six-yard line found Zaroury who finished comfortably.

There was just time for two debutants to come on with both Marcel Lewis and Joe Bauress coming on. In doing so, Bauress became the first 16-year-old to appear in the first team this century and I suspect the first since Terry Pashley and that was in the Texaco Cup back in 1973.

That was the final act. We are through to round four and let’s hope the draw is kinder to us than it’s been in the last two seasons when our opponents at this next stage have been Manchester City and Spurs. We will find out tomorrow night.