Sheffield Wednesday claimed top place in the Second Division in 1972 after Burnley could only draw 0-0 at home against Middlesbrough, a result which at least extended our unbeaten start to the 1972/73 season. 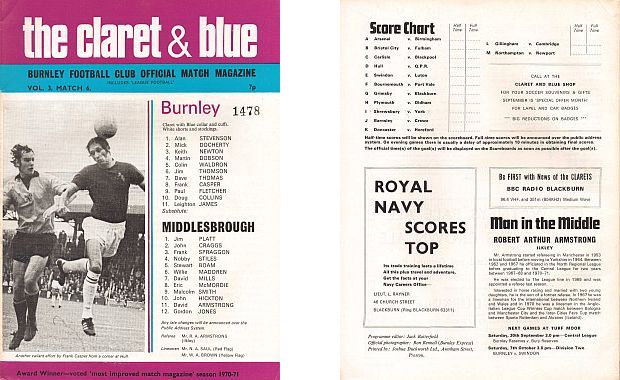 It was Euro Week in Burnley and it all got off to a flying start when Family Circle competition winner Mrs Joyce Williamson took off for Düsseldorf where she was asked to better Chamber of Trade representative Mr Duncan Harrison in a photograph taking competition in the Rhineland City. There was much planned at home yoo with the whole week kicking off with a motor cavalcade through the town and that was followed by a hairdressing competition, a Danish cookery exhibition and a gala evening at the Keirby.

Meanwhile, regulars at the Whalley Range pub in Padiham were celebrating a massive pools win. That was the news sweeping the area when one of the syndicate, which had only been put together at the start of the season, was so excited that he leaked the news. All was not as it seemed for the twenty members, as landlord Mr Arthur Knight explained when it was revealed that they had won just £250, or £12.50 each. He said: “We knew that we must have won something big when we had eight score draws and two no score draws with only ten score draws on the coupon, but it was so complicated that we couldn’t work out just how much was to come. Word soon got round Padiham about the situation, and, of course, people were soon talking in terms of thousands, but our win isn’t bad at all for starters.”

There was a major panic in Garswood Close when one of the householders reported that there was a snake on the loose. There was pandemonium as the police were called but they in turn called in local naturalist Mr Reuben Jackson who quickly determined that it was no more than an elephant hawk moth caterpillar. “It is fully grown and was probably looking for some soft ground in which to pupate,” said expert Mr Jackson. “These caterpillars live on rosebay willow herb leaves, but pupate in the ground. They are not particularly common.”

Did anyone have a teacher at school around that time by the name of Mr Douglas Smith who might have suddenly gone missing? The mystery is solved. He was charged by police with unlawful possession of drugs and was remanded by Burnley magistrates. He was also accused of forging documents with intent to defraud, and obtaining money by a forged instrument. The courts asked for medical reports.

Having believed Burnley would not be involved, news came that the town was now preparing for 50 Ugandan Asian refugees who were seeking sanctuary in the United Kingdom. Despite concerns on jobs, the town council’s General Purposes Standing Sub-Committee agreed to take ten families but it was not a unanimous decision. Even so, all that was needed was for the decision to be ratified by the full General Purposes Committee.

Onto sport, and what a let down for local boxing fans who went to see Burnley boxer Phil Matthews fight for the British middleweight title against champion Bunny Sterling. Hopes were high, very high, that Matthews would lift the title but things didn’t go to plan. He was knocked out in the fifth round after a body punch but his words after the fight stunned his supporters as he confirmed he was not fit to fight. He said. “I would not have gone down from that punch if I had been in condition.” He confirmed that he had asked for the fight to be cancelled without success, and went on to say: “We went on a fortnight’s holiday to Majorca six weeks before the fight which promoter Jack Solomons knew all about. We really lived it up over there but that would not have mattered if I had got down to training when I returned. When I got back to Burnley I was drinking and messing around and not doing my training properly. I knew a month before the fight that I had been living it up too much and tried to get the fight cancelled but it was too late.” His trainer said: “In his next fight Sterling will get probably £10,000. Phil will be lucky to get £200,” and he confirmed that Matthews would receive stricter supervision in future.

It was better news for one local sportsman, athlete John Calvert. He was the winner of the Burnley Express Sportsman of the Year and received his award from Burnley FC chairman Mr R. W. Lord ahead of Burnley’s home game against Middlesbrough. As for the Clarets, manager Jimmy Adamson had decisions to make ahead of kick off. Such was the form of the team that it was virtually picking itself but suddenly we were beset with injuries sustained in the win against Blackpool. It meant that both influential captain Martin Dobson and Doug Collins were ruled out, and in their places came Geoff Nulty and Billy Ingham.

After the excitement of the 4-3 win against Blackpool, this game was an entirely different story. It proved to be a tedious ninety minutes against a Middlesbrough side who were stringing five and six defenders across the penalty area and ready to boot the ball into the crowd at any sign of danger. Add that sort of football to a referee, Mr Robert Armstrong, who was never prepared to play any sort of advantage and was continually breaking up play, and it was never going to be anything like a spectacle.

Middlesbrough had done their homework. They knew that Leighton James was the danger man and any time the ball went close to the Welsh winger there were two defenders marking him. Hitting balls into the box also proved futile as defender Stuart Boam proved to be the first player all season to combat Paul Fletcher’s threat in the air.

Both sides had one real chance in the first half. Ours came when a James corner went right across goal without anyone getting a touch while Eric McMordie shot wide as John Hickton held down goalkeeper Alan Stevenson. It was Stevenson who got the booking for protesting. He joined David Mills and Eric Gates in the referee’s notebook.

In the second half we had two penalty claims. If either had been given it would have been harsh on Middlesbrough but had just one of them been given it might have been justice against a team that had not come to play much football and had certainly not come to entertain the paying public.

Burnley gave it a real go in the closing minutes. James saw his shot rebound off goalkeeper Jim Platt and Colin Waldron had a header cleared off the line, but it was not to be and we had to settle for a point.

Burnley certainly missed Dobson and Collins. Nulty was a full back or striker and hadn’t previously played in midfield while Ingham was still very inexperienced. The one player to come out of the game with real credit for the Clarets was Keith Newton. He was settling in well at Turf Moor and he was looking very much a class act. Not bad for a free transfer.

Unfortunately the point gained wasn’t enough to keep us on top. Sheffield Wednesday (by one point) and Aston Villa (goal average) moved above us to knock us out of the promotion places.

We might have lost our place at the top but well done to Hull whose 4-1 win against previously unbeaten QPR meant we were now the only unbeaten team in the entire four divisions of the Football League. This was our last scheduled midweek game of the season. The only games played in midweek after this were at Christmas, Easter and re-arranged fixtures.

We’d just ended a run of scoring in 18 successive league games stretching back to a 1-0 defeat at Luton in March, and after two home games, we could now look forward to another visit to Kenilworth Road. I just about made it there after a late dash, and, had one Luton fan had his way, I might not have made it back. More on that next week.