Burnley increased their lead at the top of the Fourth Division to two points over Mansfield after coming from two behind to draw 2-2 against Walsall on what was our second visit to the new Bescot Stadium.

The big news in town centred on Jimmy Mullen. As we reported last week earlier in our Derby cup report, he’d been arrested following an accident on the M55 motorway and during this week in 1992 he appeared in front of the Lytham magistrates with the court told he was over four times the legal limit. The magistrates were told by his defence solicitor that Mullen had brought disgrace to Burnley Football Club and to football in general by his actions although it was claimed he was a very nervous person who didn’t eat on match days and would have been on an adrenalin high following the 4-1 win over Gillingham. The Burnley manager was fined £750, with £30 costs, and he was also banned from driving for a period of three years after pleading guilty to driving with excess alcohol in his breath. The reading showed 146 microgrammes with the legal limit being 35. 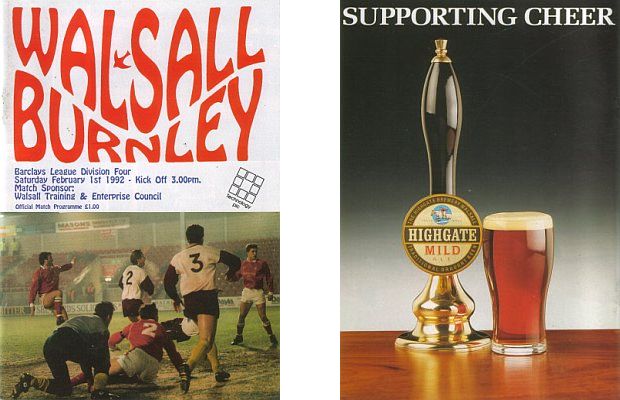 On the subject of driving, Burnley were reducing the charges for car parking in town although the reductions would benefit shoppers and not commuters who parked all day on car parks on the edge of the town centre. They would still be required to pay the full charge of 50p per day. However, shoppers in the town centre car parks would be able to park from 20p and free on a Tuesday. This was brought about because of the declining number of cars using the parking facilities and to help attract further shoppers into town.

Finally the voting was over on the direction of Habergham High School and Sixth Form Centre. Parents voted to remain with the local authority and not to go for grant funding. The vote was 60% in favour (597 votes) of remaining with the local authority and 40% against (390). This brought calls for the school governors to resign but chairman Eric Driver said: “I am disappointed that we did not get the support of the parents but we now have to put our noses to the grindstone for the good of the school.” That resignation call came from Mr Joe Di Cicio, branch secretary of the National Union of Public Employees. “I am happy that democracy and good sense has prevailed but I now believe the governors should resign,” said Mr Di Cicio.

There was a shock for Judith Rigg who was working alone as a cashier at Kitchen’s Petrol Station in Trafalgar Street. Two men came in to buy chocolate bars but when she opened the till to the first man they both pulled out axes from underneath their clothes. Judith slammed the till shut and that sounded the alarm. She told them to get out and the pair legged it towards the Centenary Way roundabout, getting away with the grand total of one bar of chocolate. She received great praise from both the police and Stephen Blackadder, the owner of the station, for the calm way she dealt with things.

More was said on the potential closure of Gorse Hill OAP home. Burnley MP Peter Pike spoke out against it and appealed to the county council to find more acceptable ways of making savings than closing the home.

Pike was also having his say on the wind farm. He was against it and was joined by County Councillor Mrs Joan Keene. Mrs Keene said she feared for the safety of people living in the route of the overhead cables which would be likely to go from the Long Causeway to connect with a sub-station in Athletic Street in Fulledge. “The people in Athletic Street haven’t been consulted and therefore I think it puts the council’s decision into doubt,” she said.  She had written to the Director of Planning and Development Services, Mr Andrew Walker, and to Mr Pike asking him to contact the Secretary of State and call for an enquiry.

The members of one Burnley club had a lot to look forward to when Ighten Mount Bowling Cup re-opened with a new look for the 90s. £45,000 had been spent on the renovations and had transformed the club. Chairman Jim Tennant and steward Andy Lochhead were both delighted with the work. “We are hoping to get our members coming to the club on a more regular basis,” said Mr Tennant.

For those who enjoyed their entertainment at home in front of the television there was some really good news. Colorvision now had the latest sets available for sale. There were both 21″ and the supersized 25″ screens available. The more expensive sets, at around £788, came with NICAM stereo and a state of the art video recorder. The new satellite systems were also available, although people were not happy about the receivers required with complaints similar to those in the 1950s when television aerials first appeared.

Saturday, however, meant football and Burnley’s game against Walsall at the Bescot Stadium, the most seen football ground in England being right next to the M6. Burnley certainly went there looking for a win but in the end were probably thankful to have come home with a point after falling two goals behind. It might not have been the result we were looking for, but it certainly showed the fighting spirit of this Burnley team.

Jimmy Mullen made two changes from the team that had gone out of the FA Cup a week earlier on that memorable day at Derby. Adrian Randall was available again having been cup-tied and Roger Eli was back to full fitness. Both came in to the team with Steve Harper and Graham Lancashire, both in the starting eleven at Derby, taking the two substitute positions.

In truth, it was a game we should have won but in the end were happy to take that point from. As early as the third minute we should have been in front but Eli shot wide when he looked a certain scorer. Walsall went straight up the field and won two corners and from the second they took the lead with only five minutes gone. The corner was only partially cleared and it fell to former Claret Colin Anderson who had taken the corner. He quickly played the ball back into the box where Michele CECERE went past the stranded Chris Pearce and Burnley, beaten 5-2 at Blackpool in the previous away league game, were behind again.

Burnley responded well and should have cancelled that goal out on a number of occasions. We created numerous chances but spurned the lot with John Francis more often than not the culprit. He’d certainly left his shooting boots back at Turf Moor. The best of those chances came when John Pender sent Ian Measham away down the right. Measham played the ball to Randall who made a great run before releasing Francis. He got into the box but then got his shot horribly wrong and it almost went out for a throw in.

By half time we still trailed 1-0 in a half where Walsall had hardly threatened since taking that early lead. The key now was to get an equaliser early in the second half. Unfortunately, with less than two minutes of the second half gone, we were facing a real uphill battle. Anderson got in another cross, Cecere headed the ball down and Steve O’HARA shot at goal. Pearce got a hand to it but couldn’t prevent it from going into the far corner.

Another defeat looked on the cards, but with just over twenty minutes remaining we got a lifeline. We’d attacked Walsall almost incessantly during the second half and finally got some reward. Francis was the architect. He received a long kick from Pearce. He brought it instantly under control and turned his man before making a burst into the box. From the right hand side he got in a cross-cum-shot and ELI came storming in to score from close range.

It really was all Burnley now with the massive contingent of Clarets roaring on the league leaders. We bombarded the Walsall goal and eventually came the equaliser. Steve Davis had a shot blocked but it fell for substitute Lancashire. His shot too was blocked and it came out to Davis a few yards outside the box. The defender hit another shot at goal. This time it got through but was saved by goalkeeper Mark Gayle. He couldn’t hold it and the ball rebounded for the onrushing Mike CONROY who made absolutely no mistake.

We wanted three points, but as the final whistle blew we were delighted to have come back and got one point. With second place Mansfield having lost the night before it was now a two point lead at the top for Burnley.

Mullen said after the game: “You just can’t afford to give a side two goals start. My defenders are very disappointed with the way they gave the goals away today, but we should never have been two goals down. They hardly threatened us, and at the same time John Francis would admit that he should have had a hat trick at the other end. If we can stop giving away goals like the ones Walsall scored, we have got a great chance of making something out of this season because we are always capable of scoring goals.”

The teams at Walsall were;

In a week with few games it was a welcome result the night before when Cardiff beat Mansfield 3-2 at Ninian Park. Any other result and Burnley would have travelled to Walsall in second place.

With two home games, against Lincoln and Northampton, to come in the league after the Autoglass game against Scarborough it gave us real hopes of cementing that place at the top, just as long as we, according to Mullen, stopped giving goals away.