Clarets get good news from Gillingham on day off 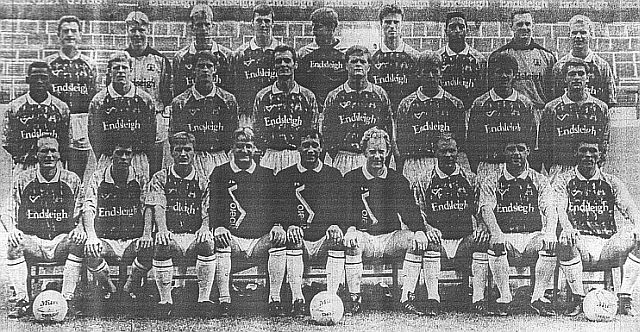 With an odd number of teams in the Fourth Division at the start of the 1991/92 season, 11th April was one of the two dates on the fixture list when we were the odd club out and left with no game.

We’ll have a look at the local news of the week, as always, and then take a look at the results from those games played to see which, if any, had been of some help.

If you were catching a bus thirty years ago, there were no apps telling you when to expect one and then things got worse with the busmen being urged to take strike action. Talks between the union and Burnley and Pendle Transport had broken down with union officials reporting that they had no option but to recommend strike action.

Back in September, seven months earlier, there was shocking news just round the corner from the Turf when 73-year-old Kenneth Howard was found dead having suffered a heart attack after receiving several blows to the head with a weapon.

The police had been at a loss despite a major investigation but now, finally, there was a possible lead. There had been cases reported of a late night burglar preying on the elderly in the very same area. The police believed this could be the same man who had murdered Mr Howard.

Meanwhile, a 19-year-olod was sentenced to nine months in a young offenders’ institution having been caught shop lifting. William Stewart pleaded guilty in court to stealing two soldering guns from Halford’s and five joints of meat from Kwik Save and asked for two similar offences to be taken into consideration.

He also admitted being in breach of a twelve month conditional discharge for the theft of a DSS UB40 and trying to obtain £45.32 by deception and of a six month probation for threatening behaviour. In terms of the shoplifting, it was revealed that he was doing it to help him to buy alcohol.

Another man was in court and was baffled about it. He’d been removed from a train at Burnley Central Station because he was in a drunken stupour. Henry Coulston said he couldn’t understand it because he hadn’t had a drink for two weeks but then said: “It’s a complete blank. I don’t know how I came to be in that state. I haven’t had any money for two weeks. The only thing I can think of is I bumped into somebody who offered me drink.” His reasoning worked, in a fashion, he received a conditional discharge.

The week proved to be a really testing one for some of Burnley’s young footballers who attended the inquest for Ben Lee. One apprentice Jamalar Rahman had actually gone onto the roof with Ben b but then made a decision to go no further, Andrew Lawson was below, heard a crack as Ben went through the roof and then looked up to see him fall.

Before looking at the weekend football, it has to be reported that one poor family were left unable to spend a penny when burglars broke in and stole their new champagne bathroom suite, including the toilet.

Fourth place Rotherham beat fifth place Rochdale and Mansfield won 2-1 at home against next to bottom Carlisle. The big news came at Gillingham; in tenth place, they beat Blackpool 3-2 and ensured we got through the weekend still top of the league and still two points clear at the top and with a busy week ahead of us with away games at Stockport in the Autoglass and Rochdale in the league.