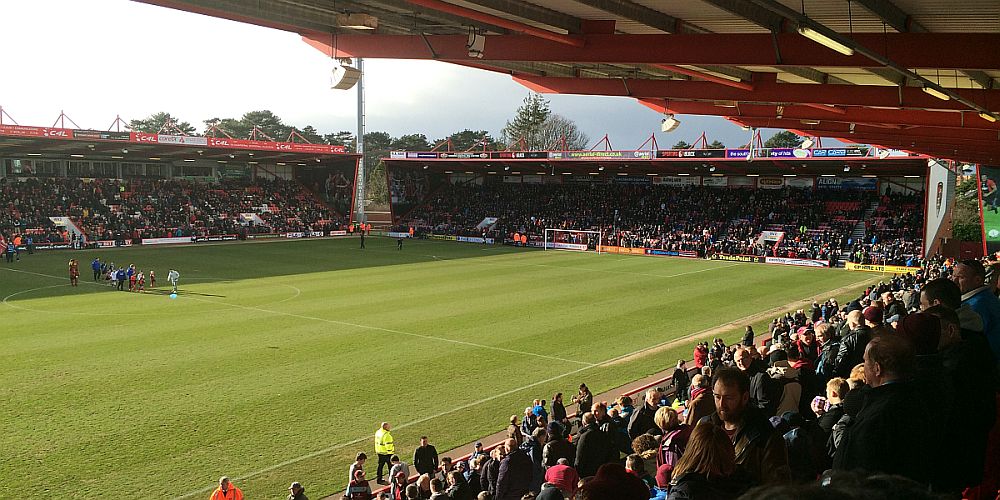 An 89th minute goal from substitute Jay Rodriguez earned the Clarets three pre-Christmas points at Bournemouth yesterday. It was a third successive away win against the Cherries, and that’s the first time we’ve achieved that against any club in the Premier League.

The game, which was also Sean Dyche’s 50th Premier League win as a manager, could hardly be described as pretty, and long before the end I’d decided that we were looking likely to hang on for a 0-0 draw. That was until Jay Rod did what no other player had been able to do all afternoon. He got an effort on target with around ninety seconds of normal time remaining and what a moment when the ball crossed the line right in the corner to Aaron Ramsdale’s left to prompt wild celebrations both in the stand just to the side and on the pitch.

It was the perfect end to a far from perfect game of football in the middle of what can only ever be described as a long day. My early morning plans were changed when I learned of the M66 crash on the Friday night. I brought my departure forward by half an hour but there wasn’t any need, the road had been re-opened although sadly, since, I have heard that someone lost their life in the accident.

Bournemouth is very much a long day out. Only Brighton, and then by no more than a handful of miles, is the only away trip that’s further and we had to make some of the journey there in heavy rain which never helps.

We found our regular parking spot there. It’s a good ten minutes walk away but by then the rain had disappeared and it is a pleasant walk through parkland to get to the ground where were in good time and quickly learned the team news. Although doubts, both Ashley Westwood and Chris Wood were in a line up that showed just one change from that which had beaten Newcastle with fit again Charlie Taylor replacing Erik Pieters on the left hand side of the defence. Kevin Long made a return to the bench after a few weeks with injury, replacing Ben Gibson who had been unfit to travel.

Embed from Getty Images
I’m not superstitious but I did buy my programmes from exactly the same place as I’d bought them in the two previous seasons and I also ensured I went through the same turnstile. That was all let down when the teams lined up to kick off and we were defending the end closest to us; in the two previous seasons we’d played the other way in the first half.

We took the game to them right from the off and if the first ten minutes or so of the game were anything to go by then we’d have been big winners. Had we got a goal in that opening then we could have run out big winners. We didn’t and the game soon settled into what it was, a poor encounter which was being played in front of the lowest Premier League crowd since December last year when less than 10,000 turned up at Bournemouth for their 2-1 win against Huddersfield.

The Bournemouth players, and the pantomime figures in leggings on the touchline, were up in arms when Simon Francis went down injured after colliding with Ashley Barnes. I can’t see anything wrong with it and neither was there anything wrong with the clash between James Tarkowski and Ryan Fraser although I have to admit I don’t think I’d like to be coming off second best in a physical tussle with Tarkowski.

The first half did get a bit tetchy at times but I thought the excellent Martin Atkinson dealt with everything every bit as well as I would expect him to and there are only a couple of points I’d take him up on. He was alert enough to see that Dan Gosling had taken a dive but took no further action against him and I have to admit I was mystified that only three minutes time was added on at the end of the first half given the two stoppages for Francis and Fraser, who, for some reason, became the target for the Burnley fans, even more so than Josh King and we know who he used to play for.

When that final whistle did blow I’m sure the player and officials were relieved to get off the pitch as the rain, which had been incessant for much of the first half, had become torrential.

Embed from Getty Images
It hadn’t been a classic 45 minutes. Like Newcastle at the Turf last week, we hadn’t had a shot on target but, there again, neither had Bournemouth. I don’t think there was much, if anything, to choose between the two sides, neither of us had played well although those conditions had to be a major factor.

I don’t think Bournemouth improved after the break to be honest; I just thought we went a little bit worse and another half of similar football was provided with Bournemouth looking the more likely, even if very unlikely, to break the deadlock. There was a period when we just didn’t seem able to get the ball away. We conceded a number of corners but thankfully nothing came of them although one was held up when VAR had to check a clash between Barnes and the ineffective Philip Billing. I’ve seen it, and I think Billing is perhaps fortunate to stay on the pitch.

We needed to change things. We couldn’t withstand constant pressure through to the end. Sometimes, bringing on substitutes can make things worse. This time, when we made our changes, I did think that all three changes, made within a 17 minute period, proved to be positive and at the very least helped us to get more possession.

Aaron Lennon was the first to come on for Jeff Hendrick. Jay Rod replace Barnes and finally Robbie Brady came on for the quieter than usual Dwight McNeil. Brady showed some positive stuff but it was the other two substitutes, along with Westwood who provided the game with its only on target effort and only goal.

Lennon and Westwood linked up well on the right. It was Westwood who finally got the cross in for Jay to, from what we could see, head home. Then we had the wait for VAR. Yesterday, the football world was told that Premier League fans would be given more information in these situations on the big screen. What happened? Bournemouth’s big screens went blank. We thought they were checking for offside but it was apparently handball. There was an announcement which I heard on the Match of the Day coverage which was impossible to hear from where we were. It does look as though the defender has maybe handled it but Jay did nothing wrong and the goal rightly stood.

Embed from Getty Images
The board almost immediately went up for five extra minutes. There was one real scare when the ball dropped for them. Nothing came of it and the points were ours. I can’t say we turned in a good performance; we didn’t, but we played effectively in that they didn’t have one effort on target and playing in those conditions really had to be extremely difficult.

Once the goal had been given the players came over to the fans and I noticed the fist pumping and celebrations from Phil Bardsley as much as anything. He was at it again at the final whistle and led a group of our players who gave their shirts to some of the kids who have landed themselves fantastic Christmas presents. Nick Pope was among them and I’ve never seen our goalkeeper quite so animated as he was at the end, giving his Papal Christmas message to the fans.

I do like listening to what is nothing other than sour grapes and Chris Mepham, Bournemouth’s ineffective defender is the latest. “Whenever you get momentum in a game, they (Burnley) look to kill it by making a cynical foul, being slow to take throw ins, take set pieces,” he said. “We knew they would do that and it was difficult to get a foothold in the game.”

By the way, the rain hadn’t ceased and that walk back to the car was far less pleasant, weather wise, than the walk to the ground had been. My coat is just about drying out. But the smiles on the faces were there. We’ve got 24 points from 18 games and that’s a good position for us to be in going into Christmas and, on that theme, I hope everyone has a very happy Christmas.

Embed from Getty Images
It’s time for the turkey and trimmings, for the pudding in three days time and then it’s back on the road to Goodison Park and a Boxing Day game against Everton with the hope that we can wipe away the memories of a year ago. It’s 52 points from 37 games since. Just a reminder for those who allow their glasses to be any more than half empty.