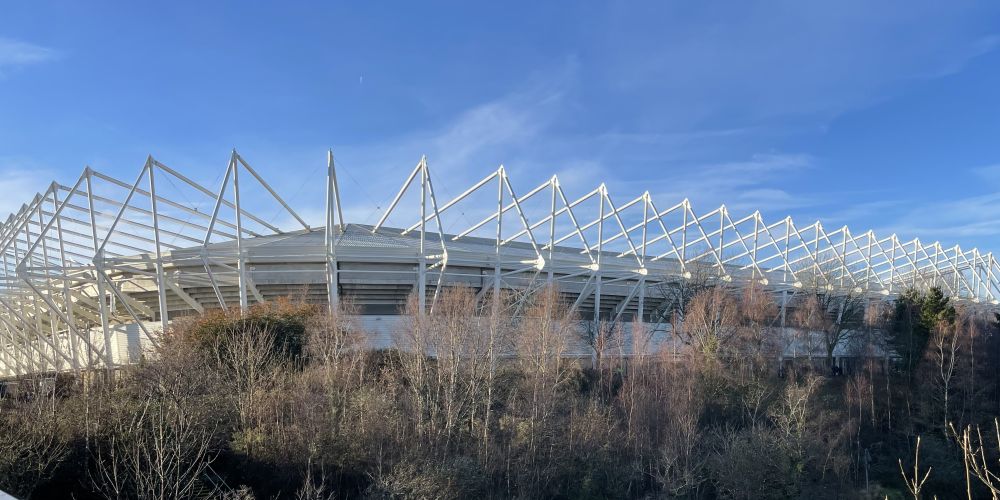 Burnley recorded a first double of the season with yesterday’s 2-1 win at Swansea, a game that saw Dutch left-back Ian Maatsen score twice in a game for the first time in his career.

Both of Maatsen’s goals, a free kick and a shot from outside the box, came in the first quarter of a game in which Swansea quickly pulled one back but unable to add to that solitary goal.

After the relatively short trip to Stoke last Friday, it was back to the long trips again and we kicked off 2023 with a journey to South Wales via the scenic route away from the motorways, passing through Llandidrod Wells, Builth Wells and other Welsh landmarks I wouldn’t dare to spell or pronounce, before driving through the Brecon Beacons National Park.

On the clearest of days, the views were stunning as we went up the mountains and back down to Swansea and our parking spot just a short walk from the stadium. What a refreshing change it was from trudging up and down the motorways full of cones and hold ups.

Embed from Getty Images
It was our sixth visit to the now named Swansea.com Stadium and we were still searching for our first win there having previously suffered three 1-0 defeats, a 3-2 loss when referee Anthony Taylor had a nightmare, and a 1-1 draw when they equalised right at the end on our first visit in 2008.

Could we do it this time? One thing we got spot on was the team. Between us, on the way down, we predicted that Nathan Tella, Anass Zaroury and Jay Rodriguez would be in at the expense of Manuel Benson, Darko Churlinov and Ashley Barnes. That was the case with Churlinov not making the bench; Samuel Bastien was preferred for this one.

It was a quiet sort of opening to the game; punctuated only by the total nonsense that was referee Oliver Langford who seemed unaware of what was going on for much of the afternoon, missing incident after incident. If this is the quality of referee in the second tier of English football, adding to other recent officials at Burnley games, then Howard Webb has a huge job at PGMOL.

There had been a couple of fouls on Tella that the referee just completely missed, or ignored, but when Harry Darling fouled him, we finally did get a free kick. Josh Brownhill, somewhat worryingly, stepped up but he was joined by Maatsen who hit a shot to the far side that cannoned in off the post. Two goals directly from free kicks in just over three weeks, adding to Jóhann Berg Guðmundsson’s at QPR.

Embed from Getty Images
We hadn’t had too much time to absorb that when we went and scored again. This time Tella got past his man on the right touchline and the Swansea player didn’t foul him. He moved inside and got the ball over to Maatsen on the left. The full back, clearly buoyed by his goal, decided to have a go again from just outside the box and let fly. It went with some force but I’m sure the home fans must have been disappointed with goalkeeper Steven Benda’s attempts to keep it out. It looked as though he was trying to punch it over but could only help it into the net.

“This is looking good,” I thought but I should have waited a while. We didn’t hold the two goal lead for long but again the referee decided to play a major part in the Swansea goal, missing another clear foul on Tella that allowed them to pick up the ball and work it forward to Joe Allen who shot from over 25-yards out. It took a slight deflection of Jordan Beyer which left Arijanet Muric parrying it out. Ollie Cooper was first to it and hit home from close range.

From comfortable at 2-0, it was now more edgy at 2-1 and for much of the remainder of the first half it was a struggle for us with Swansea the brighter of the two teams. Allen, whose shot had led to their goal, was running the show in midfield and a couple of times we were perhaps fortunate not to concede again. Thankfully, we got to half time with the 2-1 lead intact with the hope that we could grab back the initiative in the second half.

I’m not sure we grabbed too much back but, overall, we comfortably held them at bay during the second half. Guðmundsson came on early in the half for the hugely disappointing Zaroury but it was the double change soon after from Swansea that was mystifying. Luke Cundle, once of Burnley, and Olivier Ntcham, came on for Jay Fulton and Allen, probably their best two players.

Embed from Getty Images
Encouraged by the home fans, Swansea searched for an equaliser but their patient approach didn’t reap dividends. The best two chances of the half actually fell our way. Brownhill went through but his first touch cost him and the goalkeeper saved his effort and almost immediately he had another shot that he couldn’t keep down.

He was provider soon after, flicking the ball on for Rodriguez who somehow headed wide. By then, it looked as though another goal would see us through but it didn’t come; it was probably our last opportunity too.

For all their possession, Swansea hadn’t really created a chance in the second half, that was until into the five minutes of stoppage time when Ntcham got in on the right. Thankfully, his shot was wide, almost going out for a throw in. All that was left was for Langford to blow his final whistle, a decision he got right.

A first ever win at this stadium, to add to our first ever wins at the DW Stadium and the Stadium of Light earlier this season. That means we’ve recorded victories at all the current grounds in the Championship with Reading’s the only one where we are still to win a league game.

Embed from Getty Images
This win took our lead over third back to fourteen points with the again impressive Jack Cork, a former Swan, leading the celebrations this time.

That’s 56 points from 26 games; it takes some believing doesn’t it? In the early weeks of the season, I was reluctant to compare this season with either of Sean Dyche’s promotion seasons and did so. I didn’t think it would be fair on this team. Maybe I should have done but I’m happy to now. In 2013/14, we’d just drawn against Sheffield Wednesday 1-1 in our 26th game and had 51 points. Two seasons on and the points total was 45 having smashed MK 5-0 in game 26.

Who knows where this season will finish but yes, this takes some believing and I don’t think any of us could have thought we’d be where we are now. Without being anywhere near our best, we’ve now added the art of winning these games as we did at Stoke and now at Swansea.

There might be more changes by the time we play again in the league. We know that Ashley Westwood and Matt Lowton are leaving although neither have been involved in the league this season. We may lose some of our loan players too, but I reckon Vincent Kompany will just take it all in his stride and deal with it.

Embed from Getty Images
There were no mountains on the way home. Our stop was one with a difference, at a Newport brewery where I tasted a marshmallow beer for the first time, a bit different for someone brought up on Massey’s bitter.

Then it was the motorway route home and I can confirm without one single hold up. I bet I don’t get the chance to report that many more times this season.

Happy New Year from the top of the league.