Clarets hang on to claim narrow win against Blackpool

After three 1-1 draws, at home to Queens Park Rangers, then away at Hull City and Orient, Burnley beat Blackpool 4-3 in a sensational game at Turf Moor as the unbeaten start to the 1972/73 season continued. 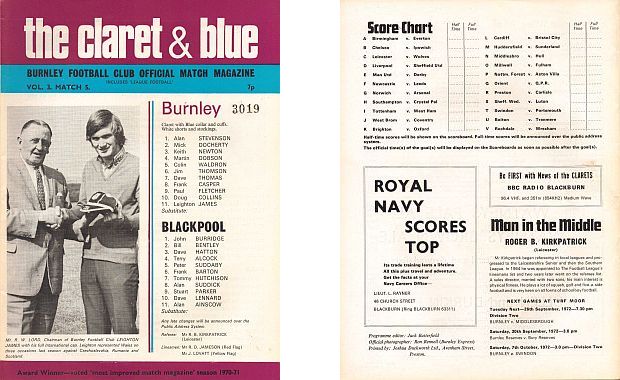 Just when it looked as though everything was going to be fine regarding the rent rises for council tenants, there were more problems as some were given bigger increases than others. The council had won an appeal to the Ministry to have the increases reduced from £1 to 75p but some still received £1 increases. Mr G. Fitzpatrick, the director of housing, explained that those in the larger houses would still receive the £1 increase but those in smaller council houses would see their rents go up by just 46p per week. He also admitted that tenants in rural Burnley, areas such as Hapton and Wheatley Lane, would see increases of between 10p and 90p. He said: “What we have said is that the 75p average weekly increase is our preliminary assessment of the fair rent. The Ministry will not necessarily accept this, and we have now got to do a far more detailed valuation exercise.” No, I didn’t understand that either.

Just two and a half weeks ago came reports of a storm brewing in the Cocos Isles where local girl Daphne Parkinson was married to John Clunies-Ross, King Ross V, thus taking the title of Queen Daphne. A few years earlier, despite having five children themselves, they restricted all couples to a maximum of two children each. Then, at the beginning of September 1972, they were accused of keeping the natives prisoners and treating them like slaves on royal plantations and, by now, news was reaching mainland Australia that inhabitants were living under feudal conditions.

The Royals acted quickly and the King announced he was quitting the throne in an abdication statement to the Australian Government. Where would they go? That was the question. They weren’t heading for England, that was for sure. When asked, Daphne’s mother Mrs Gwendolyn Parkinson of Palace House, Padiham Road, Burnley, said: “I don’t think they will be coming to Burnley.” The Queen Mum added: “It takes two weeks for letters to reach us from the Cocos Islands, and at this stage it is much too premature to say anything.” The Clunies-Ross family had ruled the islands since Queen Victoria had given them the authority during the 19th Century.

This week saw the story of a man who was living in a hostel in Darwen, had visited Burnley but missed his last bus home. All he needed was a bed for the night and that’s what he got. Unfortunately, he got his sleep by smashing a window at Burnley Coal Dealers’ Association so he could get his head down inside, and that landed him in court. The man, a Mr James Edward Astin, was 72 years of age and the court heard he had convictions stretching back to 1916. “I plead guilty,” he said, after which he was sent to prison for three months where, it is believed, he was given a bed to sleep on.

Following on from the Lucas workers going back to work, it was the same for the local building trade although they were far from happy and were claiming to have been sold down the river at national union level. “We are obliged to return to work next Monday because our executive council has signed the agreement, but the settlement of the strike does not meet with our approval,” said Mr Ted Roberts, chairman of the Burnley Building Workers’ Action Committee. Mr Roberts claimed many of the things asked for, including a fourth holiday week, were not included.

If that wasn’t bad enough, MP Dan Jones claimed that there could be a mass exodus of workers from the town with plans to move them into a new town just 15 miles away. Mr Jones said he’d received information to confirm this but declined to give the source of his information. He did, however, warn householders affected by the Calder Valley Highway that they should not fear being compelled to take homes in the new town. “That would be foolish,” he said.

As Burnley prepared for the visit of Blackpool, there was news of the sad death of one of the town’s most prominent sportsmen, Ken Cookson.  He was one of the best snooker players in East Lancashire and passed away in hospital at just 41. It was a shock and only in the previous year he was a finalist in the Burnley & Padiham area of the Golden Cue small tables competition. His death was a sad loss to snooker in the area.

In the football, Burnley were determined to get a win under their belt after the three draws. In the two away games we’d played well but just couldn’t get enough goals, both times having to come from a goal behind to get a point. The players weren’t too concerned and centre-forward Paul Fletcher said: “If we keep playing like this the chances must start going in soon.” Manager Jimmy Adamson warned: “The important thing is that we don’t develop a phobia about it. Then people are afraid to go into the box and take up scoring positions. It was a good team performance (at Orient) on Monday and if we maintain this standard the goals will come.”

Adamson was absolutely right, and the goals did come. We got the better of Blackpool but the 4-3 scoreline doesn’t really tell the story of a game that was an absolute delight to watch and a game that Burnley should have had won without a nervy last few minutes. Peter Higgs, of the Burnley Express, wrote: “If the fans don’t come flooding back to watch this sort of stuff then football has no future. There is so much talk about defensive football, but at times this match looked like an exhibition of defenceless football. It was marvellous to see the defenders surging forward to help the attacks of both teams,” he added.

Burnley created countless chances in the game and could certainly have had more than the four they did score. The first of them came after sixteen minutes when we won a corner. Dave Thomas crossed the corner kick low across the goal mouth. Colin WALDRON got onto it but saw his shot blocked. He wasn’t to be denied, got to the ball again and smashed it in via the underside of the bar. Blackpool protested that it hadn’t crossed the line but referee Roger Fitzpatrick, football’s Mr Pickwick look-a-like, was having none of it and we were in front.

That lead was doubled on the half hour and owed much to Leighton James. Making a run down the left he twice failed to make the obvious pass to Frank Casper, instead taking on Blackpool defenders before crossing for captain Martin DOBSON to expertly head home. It was 2-0 at half time and we were well on top. One more goal would surely ensure victory, and when it came it was one of two goals in a four minute spell either side of the hour.

The first of them was from JAMES. He went on a wonderful run and after beating Dave Hatton he thumped a shot towards goal where ‘keeper John Burridge got to it but could do no more than help it into the net via a post. Four minutes later it was 4-0 and what a goal. THOMAS robbed Peter Suddaby in the centre circle. There was still a lot to do but he went on a brilliant run with defenders in pursuit before calmly sliding the ball past Burridge.

Within three minutes, Blackpool had scored what we thought was a consolation goal when Alan SUDDICK controlled the ball on the edge of the area and beat the unsighted Alan Stevenson. It was surely no more than that, a consolation. There were 24 minutes still to go and the score remained at 4-1 for the next 17 of them. Then, the panic buttons were pressed as the visitors scored two quick goals. Blackpool winger Tommy Hutchison, playing on the right wing, left Keith Newton for dead with his pace and pulled the ball back for Alan AINSCOW to score from close range and then SUDDICK got his second when Stevenson parried an Ainscow shot straight to him.

Thankfully, there were no last minute concerns and we saw the game out with some comfort, but this was a game we should really have won more convincingly than 4-3. The only disappointing news for Burnley, who remained top of the league, was a third booking in five games for Thomas who would now serve an FA suspension. It was a blow with Thomas in outstanding form. A relieved Adamson said: “There were two important aspects from our point of view, we won and it was an entertaining game. We got nervy and anxious in the second half. The ball ran for Blackpool and it was these factors rather than complacency which caused us to concede three goals.”

We went into the game as one of four teams on 11 points at the top of the table but, of those four teams, Sheffield Wednesday were the only other winners. The other two, Oxford and Aston Villa, both drew. Wednesday were the biggest winners. They’d now taken their goal tally to 20. Today they would have been above us on goals scored but in 1972 it was goal average which ensured we stayed top of the league. We remained unbeaten from nine games as did QPR, although for them with a game in hand it was just eight games. However, QPR had won only twice. Cardiff were still bottom but Millwall had replaced Orient in the relegation places.

With another midweek fixture list, Burnley were hoping to remain at the top with another home game to come.