Clarets have no answer to early Manchester City onslaught

A successful tour of Northern Ireland and a win against Gremio had given Burnley fans a massive lift ahead of the 1997/98 season, but we all came back down to earth when Manchester City visited the Turf for the final pre-season friendly just one week ahead of the big kick off and beat us 3-0.

Burnley were a side expected to mount a promotion challenge in Division 2 and it was the same for City who were looking for a return to the Premiership having been relegated a year earlier. Surprisingly, despite being promotion candidates, they’d finished the previous season in the bottom half of the table. 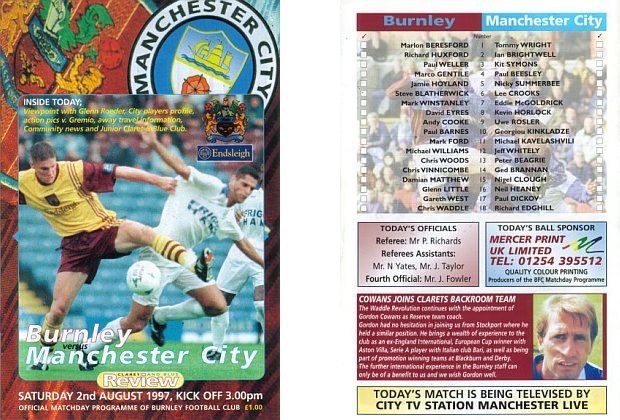 There is a one league gap between the two clubs a quarter of a century on from this game but in truth it is a huge chasm. Even in 1997, they were in a different world to us and they were able to go into the game with players such as Georgi Kinkladze and Uwe Rösler to name just two and two days before the game they splashed out a big £3m fee to land Portsmouth striker Lee Bradbury.

City boss Frank Clark had confirmed that Bradbury would play a part in the game but Kinkladze was the player everyone wanted to see. Clarets’ assistant boss Glenn Roeder said of him: “He is exceptionally gifted. You simply can’t coach players like that. They are born with that ability.”

Burnley had to go into the game without the services of Marco Gentile due to a stomach strain and Gerry Harrison who had suffered a deep cut to his knee in the win against Glentoran and was expected to be out for around a month. The good news was that all of Michael Williams, Mark Ford, Chris Waddle and Paul Barnes were fit to play.

Enthused by the pre-season to date, there was a shock in store for the home supporters with the game done and dusted in result terms before the clock had reached 3:15 p.m. When you are a new striker at a club, you really want to make your mark early and Bradbury did just that. City were in front with just 92 seconds gone and it was the three big names in the side who featured in the goal. Rösler won a header in midfield to find Kinkladze. Granted too much time and space, the Georgian chipped a superb ball into the path of BRADBURY and he hammered the ball home beyond Marlon Beresford.

With seven minutes gone, City had doubled the lead with BRADBURY scoring his second but this one was all down to Beresford who was about to clear the ball upfield only for the new City striker to snatch the ball from his feet and roll it into the empty net.

Burnley thought they’d pulled one back after Glen Little saw a shot cleared from the corner. He took the kick himself and Mark Winstanley headed home only for referee Paul Richards to rule it out for a foul.

City quickly responded to that by making it 3-0. This time Bradbury, having linked up with Ged Brannan, won his team a corner. From the corner, Kevin Horlock got in a shot that Beresford tipped onto the angle of bar and post. Kit SYMONS was first to react and he headed home the rebound.

Burnley were second best and offered very little for the remainder of the first half with our one chance missed when Richard Huxford blazed a good opportunity over the bar. That came just before Beresford denied Bradbury a hat trick with a stunning save.

We made changes at half time and early in the second half we tested City goalkeeper Martyn Margetson for the first time but he safely held a powerful David Eyres effort and then, again, it was City always looking the more likely. The brilliant Kinkladze was so close to a solo goal after a run from around the half way like and Bradbury should then have completed his hat trick. He robbed Chris Brass, who was getting his first action of pre-season having recovered from an appendix operation, but the new man at City sliced his shot wide when he looked a certain scorer.

Right at the end, City introduced 19-year-old substitute David Morley and he all but gave us a consolation goal when he fouled Andy Cooke in the box. Cooke himself took the spot kick but it was a weak effort that left Margetson to make the simplest of saves and condemn us to a 3-0 loss.

Waddle said after the game: “We didn’t start well, for the first twenty minutes we were very poor. We tried to play a similar game to Thursday (against Gremio) but we conceded three early goals and you never plan for that. I think we were missing something, energy or desire, and just never got into it. It will be a long week for the lads next week. There will be a lot of work to be put in and we’ll be training every day.”

He added: “We can’t have performances like that in the league. It might have been a friendly, but we don’t care if there are ten people there or ten thousand, we want to win every game. Everyone has done very well until today. In my mind, I know what the team will be at Watford, barring injuries. I know a lot more about my players, and I know who will be on the bus. There is a lot of work to be done, but we are confident we can achieve our goal of promotion.”

Burnley had been well beaten by a much better side but there were concerns at not giving City a tougher time although fans remained extremely confident going into the new season.