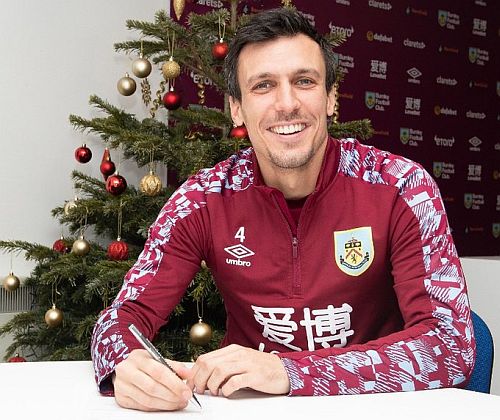 He might not have played this season in the first team but Jack Cork is very much valued at Turf Moor in what is now a fourth season since he returned and today his stay has been extended for a further year at least.

He’s signed a new deal until the end of the 2021/22 season with the club having the option for a further year until 2023 and that’s another big boost for the midfield with both Ashley Westwood and Josh Benson having signed new deals recently.

Cork had loan spells with the Clarets in both the 2009/10 and 2010/11 seasons, signed on both occasions by Brian Laws, but it was Sean Dyche who brought him to Turf Moor on a permanent basis from Swansea in the summer of 2017 and until the injury he picked up at Crystal Palace in June he’d been a first choice in the team.

“It’s been a tough six months with the injury,” Cork said. “But I feel like I’m just one or two weeks away from being back fully fit so I’m happy to have extended my stay. It’s nice to get it done and I’m looking forward to playing games now. I’m looking forward to coming back and proving I’m at the same level I was before my injury.”

He added: “Hopefully I can have another good year after this and now I’m 31, with my experience, help with some of the younger lads who are coming through at the club. This will be my tenth year in a row in the Premier League and I can add good experience to the group what we need at times. I’m looking forward to getting back playing Premier League football.”