It didn’t come as a surprise that Burnley went out of the League Cup at the second round stage in 1997/98 season against Stoke City. Having lost the first leg at home 4-0, we went down to a 2-0 defeat on our first ever visit to the Britannia Stadium to complete a 6-0 aggregate win for our opponents.

The town was hit with a plague of head lice in this week with cases rising way above the average. While health officials could give no explanation but parents of infected children could. One mum, Julie Fisher said: “In this day and age this should not be happening.” Julie’s daughter was among twenty children at one school to become infected and she was joining forces with Michelle Howard, another mum, to call for the return of the nit nurse. 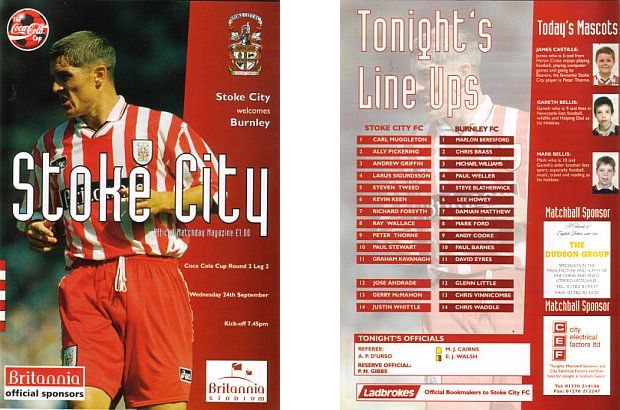 They, and many other parents, were blaming the withdrawal of the school nit nurse but their suggestion was dismissed by Dr Roberta Marshall, a consultant in communicable disease control. She said of the school nurses: “They didn’t work. If they did work, we would have got rid of the head lice,” and she added: “This is a community problem. It does not just affect schools. As many as 40% of reported cases are in adults and a lot of people are not actually aware they have a problem.”

We were in the early years of the National Lottery when Mystic Meg was still predicting who might win for those gullible enough to believe her Saturday evening nonsense. The lottery was there to support good causes and three groups in Burnley had been successful in acquiring lottery grants.  “We are thrilled to bits,” said Stephanie Bolshaw, representing the Elm Street Tree Family Support Group. They had been awarded a grant of £152,419 while there was an award of £97,424 to the Burnley and Pendle Multi-Racial Playbus Association and £22,500 to the Burnley based Women’s Domestic Violence Helpline.

One Burnley man was celebrating a £2,450 windfall after winning a bet placed at Ladbroke’s. Window cleaner Michael Nicholls had bet that Faustino Asprilla would score first in Newcastle’s Champions League tie against Barcelona and that Newcastle would win. That came up but he doubled up with a similar bet requiring Teddy Sheringham to scored first in Manchester United’s game in the same competition. He bet £7.50 and with Sheringham not playing, he still expected to receive £2,454.75 until Ladbroke’s, who had taken the bet, told him he could only place them as single bets and offered him £400.

In stepped the Burnley Express who took on the bookmaker on Mr Nicholl’s behalf and eventually he received the full amount with Ladbroke’s thanking the newspaper for bringing it to their attention.

Finally, before turning attentions to the football, Richard Sutton, a 29-year-old of Sussex Street in Burnley, was sent to prison for fifteen months for indecently assaulting a seven-year-old girl. He admitted two charges from four years previously and was told by Judge Ian Webster: “All judges are agreed this sort of behaviour is far too serious for a non-custodial sentence. People who are tempted to interfere with young children must be shown the courts will not tolerate such behaviour.”

A League Cup tie at Stoke it was for the Clarets. Normally, this would have attracted some interest from our fans with it being a ground tick, but even I opted to give this one a miss given we were already 4-0 down from the first leg.

Chris Waddle confirmed that we were down to the bare bones with the squad hit by injuries and it was possible that he might have to use some of the players he’d placed on the transfer list. He confirmed that we could expect to be without all of Gerry Harrison, Mark Ford, Steve Blatherwick and Michael Williams.

It proved to be the case. None of them were available and it led to two players making their first team debuts. In came transfer listed Marco Gentile but also in the starting line up was 38-year-old reserve team coach Gordon Cowans. Gerry Creaney, who had come in from Manchester City on loan and hoping to win a deal, was given his first start having come off the bench against Preston.

Stoke knew they were through and Burnley knew they were out and it led to a game that could hardly be considered competitive. For over half an hour it was nothing more than a training exercise so someone had to do something about it to try and bring the game to life.

In stepped referee Andy D’Urso. There was a scramble in the Burnley box after Marlon Beresford had fallen on the ball. Players were trying to kick the ball from him and D’Urso stopped the game and astonishingly decided on a bounce up on the six-yard line. Kevin Keen went into the bounce for Stoke while, even more astonishing than the decision itself, Beresford did for Burnley. D’Urso dropped the ball, KEEN got to it and just poked it into the unguarded net.

That was just about it for the first half, but the game stepped up after the break. We were much better and Stoke offered very little other than one effort from Ally Pickering. But the only goal of the half went Stoke’s way when a free kick found Peter THORNE who finished well from fifteen yards.

It all ended 2-0 on the night, and 6-0 on aggregate, and most of those there were relieved to hear that final whistle.