For the second time in 2022, Burnley have signed a player from a Bundesliga club with the capture of Macedonian winger Darko Churlinov from VfB Stuttgart, the team we played and beat in the Fairs Cup in the 1966/67 season.

The 22-year-old moved to Germany eight years ago to join Hansa Rostock as a youth player having previously been with clubs in his homeland. After a year there, he moved to Magdeburg and then in 2016 he signed for FC Köln where he went on to make a first team debut in the Bundesliga during the 2019/20 season. 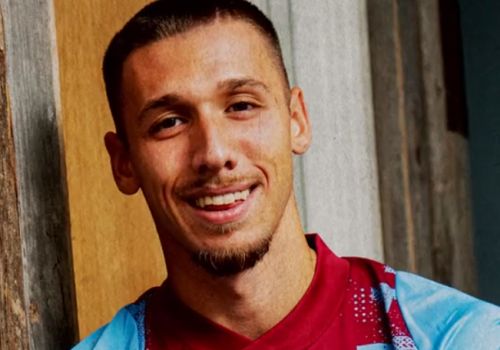 He joined VfB Stuttgart, who were then in 2 Bundesliga, in January 2020, with the team winning promotion at the end of that season. Back in the top flight last season, he made fourteen Bundesliga appearances but last season went out on loan to Schalke 04 where he became a regular and, as he’d done at Stuttgart, helped them to promotion. He scored three times for them while also claiming six assists.

He has now become a Claret, having signing a four-year contract to become our twelfth summer signing for a fee believed to be just over £4 million.

Vincent Kompany added: “Darko is an attacking minded player with an outstanding work-rate and mentality within the game. We have a good relationship with VfB Stuttgart and thank them for enabling us to bring a promising young player to our group. We’re looking forward to welcoming him to the team and we are happy he is a part of the future at this Club.”