Clarets miss out on Wembley day in Autoglass

Having lost the first leg of the northern final 1-0 at home, Burnley couldn’t recover it in the second leg at Edgeley Park against Stockport County. We were beaten 2-1 on the night with Stockport going through to play and lose against a Stoke side who included all of Dave Kevan, Vince Overson, Adrian Heath, Wayne Biggins and Paul Barnes.

A few weeks ago, we reported the theft of the cross from the altar at All Saints Church, Habergham on Padiham Road. In this week, a 13-year-old boy was in front of Burnley Juvenile Panel after admitting stealing it and asking for a theft from a town centre shop to be taken into account. 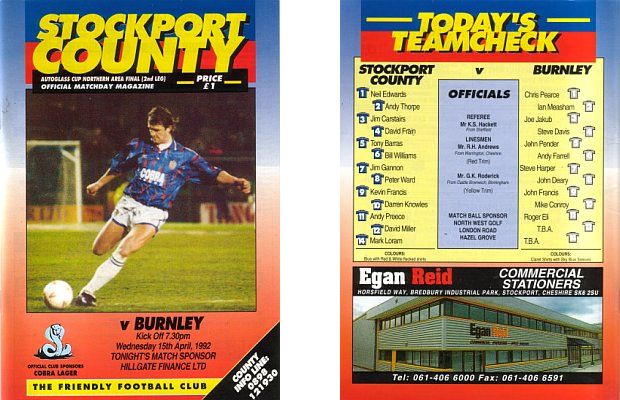 His mate had climbed in through a broken window and passed the cross to him which he hid in the woods behind the church. After pleas for a discharge from his defence, he was given a 12-month supervision order. His mum came out even worse, she had to find £200 compensation plus a further £85 in costs.

It’s some months since we brought the news of Cliviger farmer Albert Sutcliffe being charged with the murder of his wife. He appeared in court in this week in 1992. He denied murder but pleaded guilty to manslaughter on the grounds of diminished responsibility. His defence council Mr Richard Henriques said Sutcliffe adored his wife Sally but cracked when he found she’d been unfaithful for a second time so he took a 22 semi-automatic single barrelled rifle and shot her once on the bridge of her nose and once through her cheek as she lay asleep in bed.

Henriques went on to ask for a probation order but Mr Justice McKinnon refused it, said Sutcliffe was responsible for the crime and confirmed that he would be passing an appropriate custodial sentence of four years.

Children were well looked after thirty years ago with staff at six local libraries organising a programme for them during the Easter holiday including story telling and Postman Pat videos while youngsters interested in art would be able to try their hand at a colour in.

Burnley man Paul Lacey was told he’d shown the courts a great deal of respect after turning up on time having been charged with burglary with intent to steal with three further charges of taking cars without consent, driving without insurance and while disqualified. Wasn’t it good of him to get there on time despite him claiming to having no money for the bus fare? He didn’t explain how he’d managed to do it though. He stole another car and drove there. He’d no need to nick another to get home; he was sentenced to six months in prison.

Moving on to the football and there was good news for Jimmy Mullen ahead of the second leg of the tie against Stockport with all of Ian Measham, Steve Harper, John Francis and Mike Conroy passed fit. “Having more players fit has got to be a bonus for us going into such a big game,” Jimmy Mullen said, who added: “Only having thirteen fit players to choose from last week was a nightmare and I just hope things are better at Stockport. It’s important that we get a goal early in the second leg and get back in the game. If we can do that, we have a chance to go on and win. We will have to wait and see how everyone reacts to training but we are still confident of a trip to Wembley.”

Unfortunately, Mullen’s and Burnley’s hopes for a Wembley appearance would have to wait another two years with Stockport, on this occasion, claiming the place with a 2-1 win in the second leg to add to their 1-0 victory in the first leg at Turf Moor.

Stockport almost took the lead on the night within the first four minutes following a Chris Pearce mistake but they didn’t have long to wait. Just two minutes later they won a corner taken by Peter Ward. It found giant striker Kevin FRANCIS, scorer in the first leg, who got the faintest of touches at the far post. It evaded Pearce and they’d doubled their aggregate advantage.

For the next ten minutes or so, Stockport were so much on top and looked set to take the tie away from us but we got through it and then won a series of free kicks and corners that led to us drawing level on the night. Stockport failed to clear one of those corners and it fell to John PENDER some eight yards out who slammed the ball home.

Level at half time, Burnley gave it a real go in the second half to try and pull back the one goal deficit we searched for that would take it into extra time. It didn’t come and in a rare attack, Paul Wheeler got up the right wing for Stockport; we failed to deal with the cross and Jim GANNON scored to take things beyond us.

Substitute Mark Monington had two good opportunities as we fought back and I have to admit that at this point I’d had enough and left the ground. I was in my car, departing for the journey back to Burnley when I heard a ripple of noise from the gathering of Stockport fans that signalled we were beaten.

And in true football speak, we now had the league to concentrate on.

There had been some league games played in the midweek and one saw Blackpool beat Doncaster 1-0 at home. They were fortunate too against the bottom club who were virtually reliant on goalkeeper Paul Crichton who made a string of fine saves. But he was eventually their villain and conceded a stoppage time penalty when bringing down Trevor Sinclair with David Eyres scoring from the penalty spot. That win took them top. They were now one point ahead of us but we did have three games in hand on them.