A 3-1 home win against Cardiff City took Burnley three points clear at the top of the league and with two games in hand on the next three teams in the table.

Two young boys had been out riding their bikes, both of them aged just 11, at Whittlefield Recreation Ground but when an adult tried to steal one of the bikes, they were punched to the ground as they tried to prevent it. 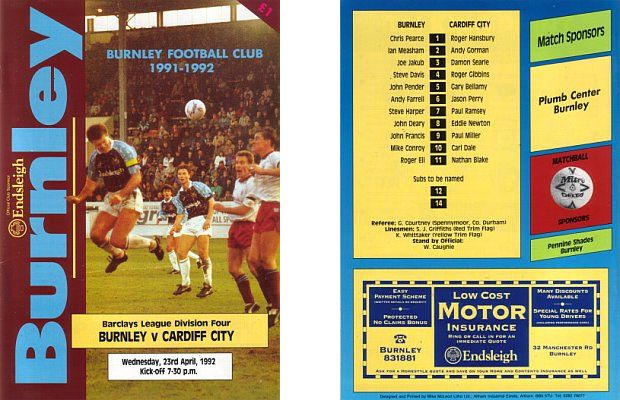 Thankfully, neither of the boys were seriously hurt, but police were searching for the attacker, believed to be in his twenties, and a woman who was with him. The boys were able to give the police very good descriptions and police were confident of apprehending the pair.

Worse news befell six-year-old David Bloor of Accrington Road. He was tragically killed in a road accident moments after buying an ice cream. He was hit by a lorry with a nurse who lived nearby rushed to help but he’d suffered severe head injuries and was pronounced dead on arrival at Burnley General Hospital.

There were plans to develop Towneley Park and the public were being given the opportunity to have a say in the future development. The borough council had already set up a working party to draw up draft plans. A spokesman for the Planning and Estates Department said: “The aims of the working party are to bring together very different aspects of knowledge, including planning, environment, natural history, improvement of highways and sports facilities, and use them in a positive way to ensure that Towneley Park stays true to its historical background, and yet can be used and enjoyed to its fullest potential by Burnley people and travelling tourists.”

A group of children found a man dead in Burnley Cemetery. They discovered the body of Lee Taylor, a 21-year-old, in some shrubbery. They reported it quickly to an adult who immediately contacted the police. It was believed that Mr Taylor had died during the previous night and that there were no suspicious circumstances.

It was Wednesday evening and Burnley were set to play one of their three games in hand against a Cardiff team we had beaten 2-0 at Ninian Park. Manager Jimmy Mullen declared he had no interest in what other teams might do. He said: “With the team I have, Burnley should be streets ahead. We have been unfortunate with postponements and now have to cram in five games in the last eleven days. But we know exactly what we have to do and we don’t want to rely on other people making mistakes.”

Mullen was without Roger Eli. Injured against Scarborough two days earlier, he would play no further part in the season. He also dropped goalkeeper Chris Pearce and brought in David Williams whose only previous Turf Moor appearance in the season had been against us for Rochdale while on loan there.

The young supporters in the cricket field stand had no real concerns in terms of promotion and knew exactly what we needed: “Five games left, seven points needed for the championship, no problem,” they told us.

Burnley started the day back on top and with a chance to take a giant stride back towards the Third Division. Jimmy Mullen would have mapped out the priorities for them, you could be sure of that, and what a start we made as Mullen made his way around the touchline.

We attacked from the kick off and the ball went down the right. John Francis kept it in, Gary Bellamy didn’t expect it. We recovered the ball and here’s Ian Measham though, Mike Conroy, Robbie Painter. Sixteen seconds, Burnley in front, Robbie PAINTER before his manager had even got to his seat. I think Conroy sold them a deliberate dummy, yes he did and Painter gobbled up his first for the club.

Measham had crossed from the right and Conroy dummied at the near post to allow Painter to come in and finish from close range. This really was the start we needed and we turned in a performance full of passion and desire and it was a shock when Cardiff equalised just before the half hour.

It all started with good work by Cardiff’s Cohen Griffith on the right. He continued with some very good work and then very, very good work. The ball came across and after more good work from Carl Dale it finally reached Nathan BLAKE at the far post and with his left foot he’d popped in the equaliser.

All square at half time and it started to get tense but then two goals in three minutes around the hour took the game away from Cardiff and won us the points.

The first of them started with Measham who got the ball into Conroy. He headed down for FARRELL and we were back in front. It came to him at an awkward height too. Burnley went for it and soon afterwards won a corner on the right. The corner by Joe Jakub was flicked on by Conroy. A header by John Pender was just kept out, but CONROY was there to make it 3-1. Mike Conroy had given Burnley some breathing space. Two goals in three minutes.

We came close to adding to the lead and Painter was not far away with a shot across goal from the right and he almost finished what he’d started.

This was the result needed and even the most pessimistic of fans were beginning to realise that we were finally, surely, about to be promoted from the basement division after seven long years. Seven points from five games had now become four from four and we were ready for the trip up the M6 to Carlisle.

« Stalemate at Stoke
Another good point for youth team »