Clarets out of the League Cup despite Davis goal

Burnley couldn’t turn round a two goal deficit from the first leg of their Rumbelows Cup tie against Wigan Athletic in 1991 and went out of the competition in the first round. 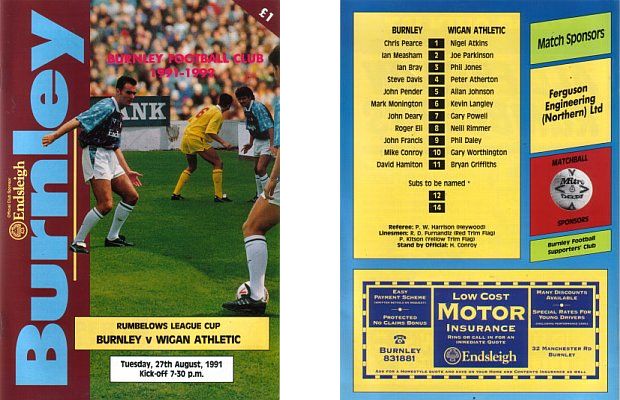 It had been a difficult couple of days in town which started when a game of football was interrupted by violence. It happened on playing fields adjacent to Abel Street when a group of Asians, who were enjoying a game of football, were attacked by mask wearing white youths who were armed with sticks and iron bars. The footballers fled but two were caught and received beatings that left them needing urgent hospital treatment.

It followed an attack on a white woman the previous evening in nearby Nicholl Street which was described as despicable but police were quick not to connect the two with DS Earnshaw saying of the football attack: “There is no evidence at this time, that this incident was in any way connected to the attack on a young woman in Nicholl Street.”

On a more pleasant note, hundreds flocked to the Weavers’ Triangle for the opening of the St. Monday Craft Fair and Folk Festival. It proved to be a popular day with many of the organisers and stallholders wearing period costume including clogs. It proved to be the best supported festival since the event started in 1980 and charities such as Cancer Research and Guide Dogs for the Blind benefited from the money raised.

Proposals for a new tourist attraction in Rosegrove had hit an obstacle following an objection from one resident. The proposal was for a canal park with 26 caravans, a quayside mooring area for three craft, a picnic area, a children’s play area, a shop and a lodge. Director of Planning & Development Services, Mr Andrew Walker, described it as a much needed tourist and recreational facility, but unfortunately a resident said there were too many concerns with traffic whilst he felt toilet facilities could interfere with his water supply and that rubbish left behind would attract vermin.

The council were to make a decision on that, as they were on a plans for a 24 turbine wind farm at Coal Clough Farm, Long Causeway , Cliviger. Mr Andrew Walker was again leading the support but there were ever growing objections led by the town’s MP Mr Peter Pike who believed it would have an environmental impact.

One poor resident was distressed with notices being placed on lamp posts stating that dog owners would be fined £50 if their fogs fouled the footpaths. “Humans are fouling the canal bank near the Mitre and getting away with it,” she claimed whilst she expressed growing concern over the increased number of flies.

Meanwhile, a motorist was stopped by police and asked to give a sample after he was thought to be driving erratically. He offered a sample alright, he spat right in the face of the police officer. He paid for it too. In court he was fined £300 and given a three year driving ban for his driving offences and a further £200 fine plus £50 compensation for the spitting offence.

Now the Clarets had been a bit unfortunate to lose 3-1 in the first leg of the cup at Wigan a week earlier and had left themselves a difficult task in the second leg. Manager Frank Casper was forced into one team change from the team that had started in the previous Saturday’s 2-0 league win against Aldershot with Paul France coming in for the injured Ian Measham.

Burnley gave it everything in the first half to try and get back into the tie. The players worked their socks off but luck wasn’t with them. Had they had any luck at all then surely at least one of the two goal deficit would have been clawed back but as the half time whistle went the score on the night was still 0-0.

Even so, there was still a chance if an early goal could be scored in the second half. Unfortunately the early goal went the wrong way. Just a minute into the second half Darren PATTERSON got above the Burnley defence to head home a Bryan Griffiths cross.

Within a minute, PATTERSON had scored again. This time it was at the other end as he could do no more than turn a John Francis cross into his own goal.

It was all Burnley now but just past the hour Wigan got a massive slice of good fortune. Phil Jones burst through. He was yards offside, so much so that he initially stopped himself. Incredibly the linesman didn’t bother and he was allowed to go through and eventually cross the ball for Neil RIMMER to convert.

Burnley just wouldn’t give it up and equalised again on the night, this time through Steve DAVIS who collected the ball almost 40 yards from goal. He moved forward a couple of paces before unleashing a shot that flew into the net. It was a stunner and the central defender almost got another two minutes later but this time saw a terrific free kick hammer against the bar.

It was clearly not Burnley’s night and it was all summed up with five minutes to go when Paul GRAY got Wigan’s third on the night to give them a 3-2 win and an aggregate victory of 6-3.

Casper said: “I thought we played a lot better for most of the game and were unfortunate not to get something from the game. Goals change games and over the two legs I think they have been lucky twice. They had a penalty in the first game that no one can explain and tonight their second goal was yards offside. Having said that, I thought we put a lot into the game and it should do us good when we get back into the league matches.”

The Rumbelows Cup results that week are shown below. All games were in the first round and were the second legs. The aggregate score is shown in brackets.