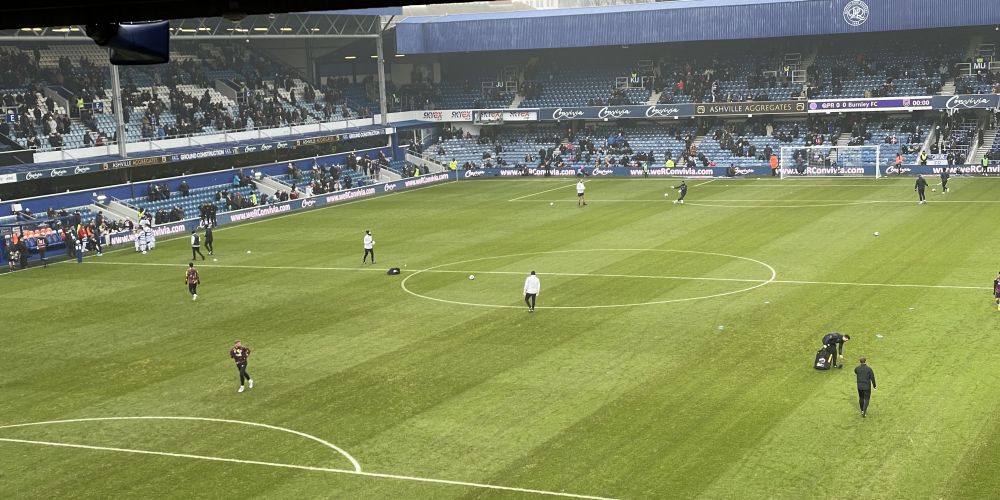 Burnley returned to action yesterday after a four week break from the World Cup and resumed in exactly the way as they had signed off in November with a 3-0 win, this time against Queens Park Rangers at Loftus Road rather than against Blackburn Rovers at home.

On the coldest of days, this was a performance to give anyone some warmth, feet apart, as we simply outplayed the team who had been top of the league as recently as 25th October when we displaced them with a home win against Norwich.

They really had no answer to us, particularly in the first half, when goals from Jóhann Berg Guðmundsson and Ian Maatsen gave us a two goal interval lead, and they never threatened to get back into things after the break with Nathan Tella adding a third to ensure the three goal victory.

Did I say it was cold? I ensured the heating came on at home some time before the early alarm forced me out of bed far too early for a Sunday morning and my lift managed to get through the snowbound road outside for our departure at 6:15 which was taking the M1 route for our final pick up in Worksop. Thankfully, apart from one stretch of the motorway that was reduced to one lane due to falling snow in the Sheffield area, it was a reasonably trouble free journey that saw us reach our destination in good time to complete the journey via the underground.

Embed from Getty Images
As we left the White City station, we picked up the team news. Tella, as expected, came in for Anass Zaroury who is currently enjoying himself watching Morocco in the World Cup. Fit again Jay Rodriguez was back from injury and preferred to Ashley Barnes despite his double in the Blackburn game. Perhaps the most surprising was the third change which saw Guðmundsson come in for Manuel Benson who, like Barnes, was on the bench.

The bench was more than interesting. Vincent Kompany named just one defender among his five substitutes while signalling a return to first team action for both Darko Churlinov and Scott Twine. Churlinov hasn’t featured for the first team since the draw at West Brom; for Twine it’s even longer with his only Burnley appearance having come as a substitute in the opening game of the season at Huddersfield.

After the short walk to the ground, we were inside and found our seats close to the corner. It wasn’t, I have to say, a good view but is there one to be had in that upper tier at Loftus Road? We were close to the Sky team. Chris Iwelumo was being given full support from the away fans, probably more than they got from us when he was a Burnley player. David Prutton, whose father-in-law is the wonderful Brian O’Neil, was sat alongside him with Jamie Mackie who got some stick from the travelling Clarets.

We were ready to resume our season. The four week wait was over but we had to contend with a pitch that looked in dreadful condition. Maybe it wasn’t as bad as Coventry’s at the beginning of the season but it very definitely didn’t look as though it had been granted a four week break.

Embed from Getty Images
If we thought we were going to get a quiet opening to the game, we were very much mistaken. With less than a minute gone, QPR thought they should have had a penalty and I thought we should have taken the lead. Somehow it remained 0-0.

With the first attack of the game, QPR’S George Thomas got onto a ball, into the box and went down under a challenge from Muric. Referee Peter Bankes, not the most reliable of officials, awarded a goal kick. On further viewing, I do think Thomas was fouled but I also think he was offside when the ball was played through to him so the correct decision would have been a free kick to us.

From the goal kick that was awarded, Muric found Tella who I thought was a certain scorer. He tried to lift the ball over goalkeeper Seny Dieng but succeeded only in putting the ball straight into his hands.

As has been the case in so many games, we then basically took over and totally dominated the play. Managerless QPR just couldn’t get onto the ball at home and it was no surprise when we went in front with another wrong decision from Bankes. He awarded us a free kick on the edge of their box for a perceived foul on Jack Cork. This was the moment when I wished Twine was on the pitch. I needn’t have; Guðmundsson took it and curled an absolute beauty into the corner of the net before making a beeline for Kompany to celebrate.

Embed from Getty Images
We had a couple of nervous moments, one when we got a little too complacent with our playing out and then when Chris Willock got a shooting chance but hit his shot higher than a Harry Kane penalty. Other than that, it was almost total domination in a first half that looked as though it was only going to bring one goal. That changed in stoppage time.

It was no surprise that it was Jack Cork who won the ball back for us on the half way line before playing it out to the left. Cork, once again, was proving to a great influence on the pitch. The ball eventually reached Tella who played it across for Vitinho to try his luck from around 25-yards. It was a good effort but the goalkeeper was equal to it, not just saving the shot but getting a strong hand on it to get it out to his right. He could not have expected Maatsen to fire it back to goal with a superb, controlled shot that left the goalkeeper and his defenders helpless.

It meant we went in 2-0 up and that was very much more a reflection of the first half that we had simply dominated.

I don’t it was ever going to be possible for us to be so much on top in the second half and so it proved with QPR getting a couple of shots on target. But we were still the better team and when goal number three went in, the game was over as a contest.

Embed from Getty Images
Rodriguez headed the ball forward for Josh Brownhill but a defender stepped in and the ball looped up into the QPR box. There, former Burnley defender Jimmy Dunne tried to chest the ball back to his keeper but Tella was in like a flash, got past the keeper and from the most ridiculous of tight angles was able to score. I suspect, when playing against a former club for the first time, you want things to go well. While not quite a Jason Shackell moment, it left Dunne with his head in his hands.

It was now just a case of whether we could score any more. We didn’t but did come close a couple of times. It did give us the chance to get subs on. Benson came first, then Barnes before, right at the end, three more so Taylor come on alongside the returning Churlinov and Twine.

By then, we were all just waiting for the final whistle to celebrate yet another win, a fifth away from home this season and the eight in total in the last ten games. And celebrate we did with just about no one moving out of the away end until all the players had returned to the dressing room.

There were some huge smiles on our fans’ faces as we poured out into South Africa Road as the full repertoire of songs were given a final airing. We made our way back to the station and on the way back to the car, as we changed train at Bond Street, we bumped into two other Burnley fans who are father and son, the dad being former chairman Barry Kilby whose smile was as wide as anyone’s having witnessed that performance.

Embed from Getty Images
The journey home was just about trouble free as the temperature continued to drop significantly and I was thankful I was able to switch on my heating around an hour before reaching home. Had I not been able to, I think I’d have still felt warm after recalling what had been a terrific return on the road, a performance that we considered over the full ninety minutes to have been as good as anything we’d seen all season. Yes it was that good.

The position in the league looks very healthy as we approach the half way point in the season but I think we all know not to get too carried away. Having said that, our total of 44 points from 22 games from the start of a season has never been bettered. Since three points for a win was introduced in 1981, this equals our best start along with the fourth division winning season on 1991/92.

Only twice have we scored more goals than the 43 we’ve notched this season. Again, we look at 1991/92 and also the John Bond season of 1983/84. In both those seasons, we’d scored 46 but in both we’d also conceded three more goals than we have this season.

As a more recent comparison, in the two Sean Dyche promotion seasons, we’d won 43 and 38 points respectively at this stage of the season.

Yes, very healthy but a long, long way to go. It’s enjoyable though, never more so than yesterday.

Two days ago, we learned that one of our long term message board members had passed away at the age of 80. She posted as spadesclaret and was known to many as just spades, or your Majesty, or Lady Spades or, for some, by her real name of Bobby.

Despite so few of us ever having met her, we all loved her contribution on the message board and we all loved her and there is no doubt that so many of us will miss this dear lady who has brightened up our days so often over the years.

While sending my condolences to her husband Dave, her son Rob, her family and friends, I would like to pay my own personal tribute to someone who became a friend through the emails that went between us; I would like to dedicate this report of our win to her.

Spadesclaret will be missed by so many of us.