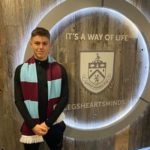 The player himself confirmed the move yesterday on social media admitting: “Tough decision to leave Everton, however delighted to have signed for Burnley can’t wait for the future.”

He’s already made his competitive debut for us; he was in the under-18 team that drew with Nottingham Forest on 23rd November and he will be available at under-18 level for the remainder of this season with suggestions that he could also feature in the under-23 squad.

He has a footballing pedigree, sort of. His dad played for York while his brother was at Blackburn.

« Referee confirmed for Newcastle game
Lenny Johnrose back at Burnley »