Burnley’s hopes of reaching the Lancashire Manx Cup Final in 1991 rested on winning at Preston by a big margin. That’s exactly the opposite of what happened with Preston winning the game 5-1 on what was a shocking and concerning afternoon for the Clarets. 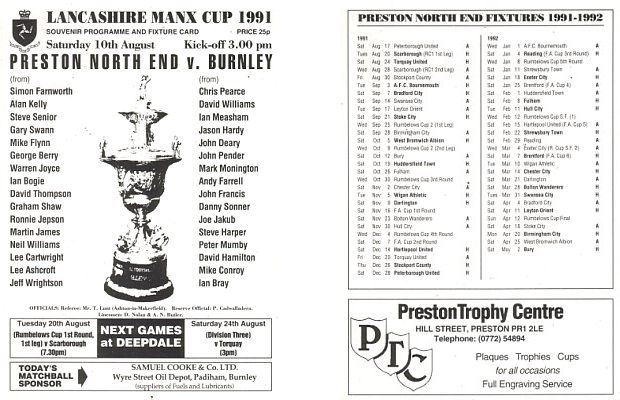 The visiting fans in the sparse crowd left quietly at the end, totally dismayed with the second hammering of the year on the artificial Deepdale surface. We’d suffered a 6-1 defeat in February after reaching the Northern Semi-Final of the Leyland DAF Trophy, but this, just one week before the start of the new season, was a real worry.

It hadn’t started too badly with the Clarets, for almost half an hour, matching their Third Division opponents. It was end to end stuff that saw both Mike Conroy and Andy Farrell go close whilst at the other end Chris Pearce made an outstanding save to deny Preston’s Ronnie Jepson.

Then, just before the half hour the deadlock was broken. Steve Senior broke down Preston’s right wing and his cross was met by Graham SHAW who headed home to give North End a 1-0 lead.

Steve Harper, back at Deepdale just weeks after signing for Burnley, forced a great save out of Simon Farnworth as we fought back, but just before half time Ian Measham played a shocking back pass. It was nowhere near reaching Pearce and SHAW nipped in to get his and Preston’s second.

Two goals behind at half time, Frank Casper shuffled things. Jason Hardy moved to left back from sweeper with Joe Jakub moving into midfield and Andy Farrell taking Hardy’s place. It hardly worked and Shaw missed an absolute sitter in the first minute of the second half when a hat trick looked certain.

We struggled to get into it and then, either side of the hour, the game was up as Preston doubled their lead. First, Ian BOGIE was allowed to run along our 18-yard line before shooting past Pearce and then Mike FLYNN headed through a crowded area from a corner to make it 4-0.

We were a beaten side and by now offering precious little and only a brilliant finger tip save from Pearce denied Jepson as he clawed the header away at the expense of a corner. The respite was short-lived. The corner went beyond everyone in the box and there was SHAW to slam home his third. 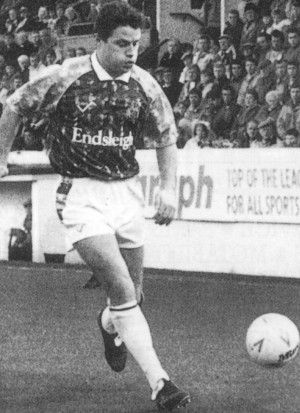 Pearce then held Preston at bay, making three wonderful saves to keep the score down before Burnley earned themselves a consolation with four minutes remaining. Graham Lancashire made a storming run down the middle before laying the ball out wide to Conroy who in turn got a cross into the box.

The cross was met by Jakub who knocked it down for John DEARY to crash home from eight yards. It was no more than a consolation and for the Burnley fans it felt as if a long, hard season was on the way if this sort of performance was anything to go by.

Once behind they just seemed to give up and there looked to be a lot of work to be done before the first league match at Rotherham a week later.

There was no bite in midfield and the defending was shocking. Without Steve Davis, sold to Barnsley, the back four looked anything but secure. The only positives were the form of new boys Conroy and Harper and the emerging Lancashire.

Manager Frank Casper said he had been pleased with the pre-season preparations until this last game and that he was confident the team would get it right when the league got underway.

He appeared happy with his squad and there was every reason to think the team at Rotherham would be the one that started at Preston.