The 1997/98 season didn’t get off to the start we were all hoping for when we lost our opening game of the season 1-0 against another of the promotion favourites Watford at Vicarage Road.

Away from the football, there was potentially some exciting news for the town centre in Burnley after the council submitted a bid for a share of European multimillions. Burnley Borough Council had put in a bid for £2.2 million of Euro funding with plans to give the town centre a sweeping facelift. If successful, there would be a further £7 million to come from the private and public sectors with around 120 new jobs created on the back of it. 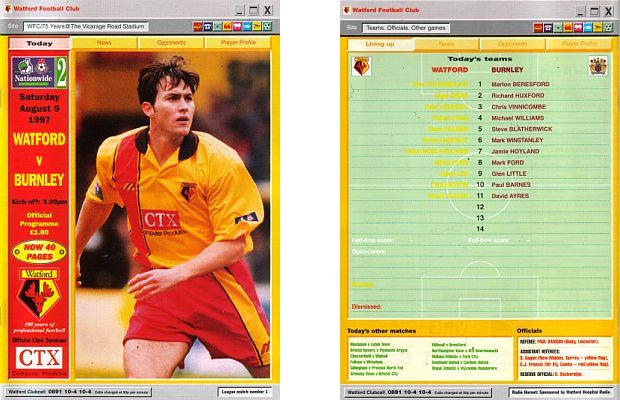 Deputy council leader Councillor Paul Smith said: “We know competition will be fierce. Many towns will be bidding and only two towns in Lancashire are likely to win.” It was confirmed that the plans would include a major redevelopment of the bus station, the Weavers’ Triangle and outer streets such as Hammerton Street and Lower St. James’ Street. Residents would have their say too; the Burnley Express intended printing a question form in their newspaper so people could write down their views.

There was good news too for the Manor Barn, off Padiham Road, which had been nominated for a pub of the year contest, and that came just a few months after the popular pub had been threatened with closure. “It’s gone from certain closure to one of the top three pubs in Lancashire,” said a delighted licensee and joint owner Mr Peter Smith, who added: “I’m chuffed because it’s about time the pub got some good comments rather than bad.”

On the subject of pubs, a very famous landlord turned up in town to open the newly refurbished Spex Express Opticians in Parker Lane. It was Alec Gilroy from the Rovers Return in Coronation Street, Weatherfield, actor Roy Barraclough who also played the wonderful Cissie Braithwaite alongside Les Dawson’s Ada Shufflebotham. Roy and shop owner Kevin Horkin had been friends for years with the optician having been the regular spectacle supplier to the Corrie cast, presumably including Deirdre.

More pub news was bad news when Ian Bennett, former landlord at the Wellington collapsed with a heart attack at home. His wife battled to save him but her efforts were in vain with Ian failing to recover. Just 48, he’d left the Wellington only months earlier after eighteen years there behind the bar.

There was a big shock for the Mechanics who had been dropped as the regular venue for the Mayor’s Charity Ball. The Mayor, Councillor Mrs Enid Tate had been a big critic of the Mechanics on a number of occasions but she insisted it was not a snub. Even so, she moved the event to the Turf with the function to be held in the new North Stand executive suite.

Local news can be good and it can be not so good, and in this week there was some awful news of 38-year-old Peter Houghton. He’d recently married but found himself behind bars due to his desire to sleep with young girls. He offered two girls money to sleep with him but both refused and one told her mum after she considered suicide.

His defence, Mr Paul Hague told the court: “The defendant is sexually attracted to young girls. He recognises this is an inappropriate, unhealthy interest in the girls. Serious though these offences are, and I concede they pass the custody threshold, they are not so serious that the court would be viewed as having dealt with the defendant unduly leniently if he was given a probation order.”

Thankfully, Judge David Pirie didn’t agree. He sentenced Houghton to fifteen months in jail. He said only custody could be justified and that he would be on licence for the rest of the duration of his sentence after release.

Gary Cooke, a 21-year-old, was more fortunate when he appeared at Crown Court accused of biting a youth’s ear outside a nightclub during a night out in Nelson. This time the judge believed Paul Hague who told the court that Cooke was actually the victim having the man, his ear and apparently his nipple, which was also bitten, on top of him outside Blueberry’s. He was cleared of attacking the other man and of unlawful wounding.

Before moving on to the game at Watford, there really was a heart warming story to report that week when Turf Moor had a visitor called Nicholas who had travelled to Burnley from America. He was fighting cancer but relapsed and wanted to visit family in Burnley before it took his sight. Thankfully, by the time he arrived to visit his grandparents, he’d won his fight against the disease. He was given a VIP tour of Turf Moor and had the chance to meet manager Chris Waddle.

That was wonderful news to take to Watford when, it has to be said, things didn’t exactly go to plan as we kicked off with one of the most difficult fixtures of the season.

This was very much an opening day of the season game in weather much more suited to summer sports. The journey down was in blistering heat and nothing changed for the game

Manager Chris Waddle sprung a surprise with his team selection. Having not been able to bring in a new striker, and with Andy Cooke suspended, it was thought that he might employ Paul Barnes as a lone striker or possibly partner him with David Eyres. He did neither; instead, he opted to give reserve team youngster Phil Eastwood a debut.

Eastwood was one of five debutants in the Burnley side alongside the manager and three new signings, Steve Blatherwick, Mark Ford and Michael Williams. Watford too had debutants, three of them, and all of Stuart Slater, Micah Hyde and Jason Lee were to have an influence on the game.

They put us under pressure right from the start but Blatherwick was standing out on his debut. He was a rock at the back and twice needed treatment after winning last ditch challenges. When Watford did get through our back four they found Marlon Beresford in excellent form while the other player to stand out was manager Waddle who played a string of delightful passes to try and get us going.

Watford never gave us time to settle on the ball and they got their breakthrough on the half hour with each of their debutants involved. Hyde went on a run from midfield and got a shot in from just inside the penalty box. Beresford did well to block it but the ball ran to Slater, the clear man of the match, who saw his shot cleared off the line by Mark Winstanley. Unfortunately, it dropped for Tommy Mooney who crossed for LEE to stoop and head home.

We responded well, and looked the better side for the remainder of the first half without being able to draw level although we were so close when Paul Barnes got onto a superb through ball from Waddle. It continued in the second half with Waddle moving up front when Eastwood was replaced and twice Watford were thankful to their goalkeeper Alec Chamberlain for keeping them in front.

It was Watford who might have won it by more with a late chance. Hyde went clean through but smashed his shot onto the underside of the bar with Gifton Noel-Williams rolling the rebound towards goal. It should have been goal number two for Watford but Hyde, for no obvious reason, decided to claim the goal for himself and got a touch just about on the goal line only to see the flag then go up for offside.

On a searing hot day, we fell just short, but Waddle had praise for his team’s commitment even though things didn’t go our way. It didn’t go my way either, I’d driven to the game and returned to the car only to find a flat tyre. It’s no fun changing a wheel in that heat I can tell you.

Elsewhere, Wigan were the big winners on opening day, beating Wycombe 5-2 with former Claret Brendan O’Connell, who had signed for Burnley nine years earlier, helping himself to a hat trick. It prompted a look at all the goalscorers to see if there were any others scored by Burnley players past or future.

There was just one other with Mike Conroy scoring Fulham’s goal in their 1-0 win against Wrexham for whom both Andy Marriott and Kevin Russell played which then led to see who else played in the league that day, and there were quite a few who’d had or went on to have Burnley connections including the previously mentioned Hyde and Noel-Williams.

Clarke Carlisle was an unused substitute for Blackpool in their 1-0 home win against Luton who fielded all of Graham Alexander, Steve Davis and Mitchell Thomas. Billy Mercer was in goal for Chesterfield as they beat Walsall 3-1 while Matt Hewlett, who would join us on loan in the following season, was in the Bristol City team who drew at Grimsby.

Doug Hodgson, the one game loan player from Sheffield United in the previous season, was in Oldham’s side for their 3-1 win against York while Graham Lancashire had a view from the bench as O’Connell hit that hat trick. Finally, John Gayle was in the Northampton team beaten at home by a Bournemouth side who included Ian Cox in defence with Eddie Howe an unused substitute.