Top of the Fourth Division and into the final four of the Autoglass Trophy with a two legged northern final against Stockport County, but a depleted Burnley team suffered a 1-0 home defeat in the first leg.

Late night house parties had been targeted by police locally with the Angels nightclub having to agree to a restriction preventing anyone from being admitted after midnight. Impromptu house parties were being held in the nearby multi-story car park and also in Towneley Park with police coming under attack from brick throwing youths while there were also claims of drug taking. 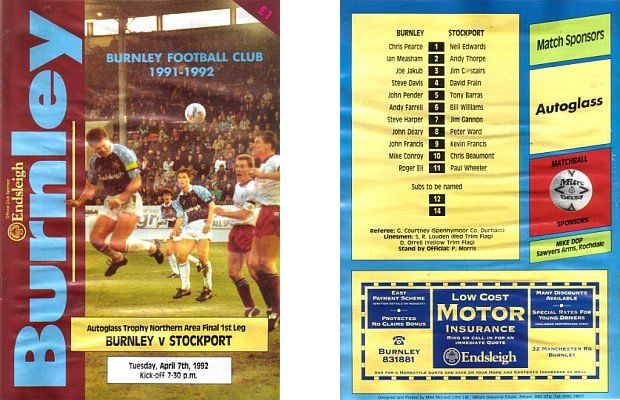 Chief Inspector Graham Kearns warned: “If something is not done to reduce the general public order nuisance, we will have real problems.” He claimed most of the problems were caused by people from out of town arriving at the Angels, many as late as 1 a.m. What an eye opener, I always thought house parties were when my mum and dad invited friends round.

There were fears that Burnley College could come under threat due to a new funding system being implemented in 1993. However, those fears were described as unfounded by principal Dr. Steuart Kellington. “There is no threat to the college,” he said. “We are growing and looking forward to the future.”

The college might have been set to stay open but the future of the Akash Restaurant on Accrington Road in Hapton was less secure after being fined almost £9,000 along with £1,000 costs by Burnley Magistrates. Health inspectors had made a routine visit but had found mouse droppings, cobwebs, dust and traces of cooked food lying around the kitchen and issued an immediate closing order for seven days.

Gina Dickinson received some welcome news via the post, a DSS Giro valued at just over £79. Off she went to cash it even though it wasn’t for her and had been delivered to the wrong address. She didn’t get the money, instead she was rewarded with a court appearance who heard she was now in breach of a previous offence of obtaining property by deception. She got away with a twelve month conditional discharge.

Last week, it was reported that a young boy, nine-year-old James Norwood, had been dragged under a bus for about a hundred yards. He’d been admitted to hospital in Preston with serious head injuries but there was better news with James in a satisfactory condition and a hospital spokesperson saying that he was slowly improving.

Craig Bannister, a 24-year-old, was in some trouble. He’d bitten a police officer on the finger in an incident and then spat at two more while in a police cell. The police had been called to a house in Heron Court and found Bannister extremely drunk. He picked up a police cap, threw it against the wall and then jumped on it. When the police tried to handcuff him, he had a bite at the finger.

Mr Philip Turner (defending) told the court: “Bannister was intoxicated when he was invited back to the house by a man who was living with a former girlfriend of Bannister. She took exception to him being in the house, but he accepts that he reacted the wrong way when the police arrived.” He was ordered to perform 120 hours community service, pay £50 compensation to each of the three officers and, wait for it, £9.53 for the damage to the police cap.

But it was to the Turf we headed to take on the club who, for some reason, considered us their main rivals. Stockport were now a Third Division club and would face what was surely going to be a weakened team. Ahead of the game it was reported that all of John Francis, Steve Harper and Ian Measham were out with injuries with Mike Conroy considered very doubtful with the calf injury he picked up in the defeat at Crewe. Adrian Randall and Robbie Painter were both cup tied although we made a desperate bid to have Randall available because Aldershot, the club he’d played for in the competition, no longer existed. The League turned us down.

Jimmy Mullen said: “It’s a horrible situation to be in before such a big match. I will just have to pick the best squad available and hope they can deliver the goods. I don’t think my new players have let me down yet and I just hope that things will have changed by the time we get around to playing the second leg next week.”

Given that news, and none of those players featured, we probably did well to come out of the game with just a 1-0 defeat and with the hope that some of the injured players could be back for the second leg.

We had our chances but overall couldn’t have complained at the result with the only goal of the game scored by big striker Kevin FRANCIS who headed home a corner.

Mullen said afterwards: “I’ve got a week to get a lot of players fit. While not wanting to make excuses, our preparation for the first leg was disrupted by injuries and I don’t want that to happen for the second leg.” He also had words for the Burnley fans. He said: “For fans to turn out in such huge numbers is fantastic. The level of support is fantastic and the fans were brilliant.”

While we were playing, three Fourth Division games were played. The only one that could really affect us was Rochdale’s home game against Maidstone. They kicked off eight points behind us but were beaten 2-1 by the Shots.