Clarets target a first ever win at Wigan 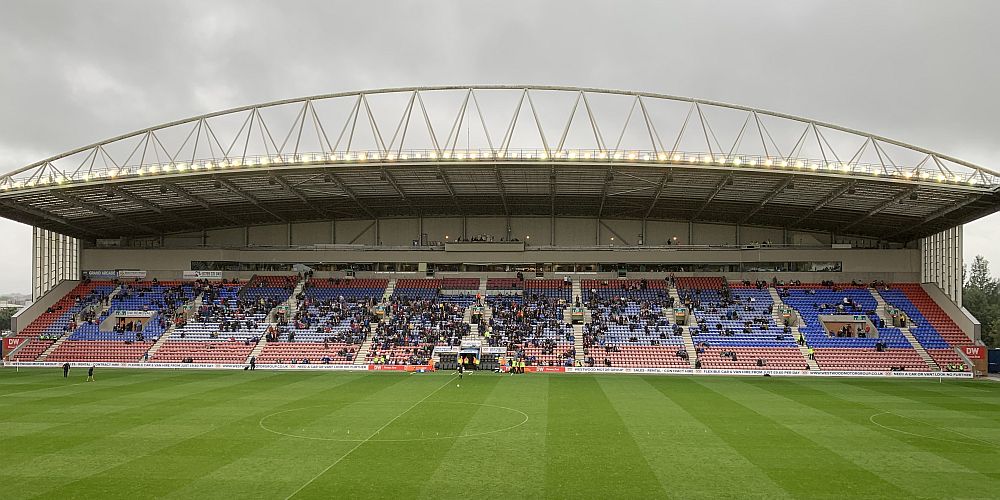 Burnley travel to the DW Stadium tomorrow to play Wigan Athletic and it will be the first time we’ve played there in a competitive game since the final game of 2013.

Wigan are the only team in this season’s Championship that we have never beaten away from home. Be it their old Springfield Park or the current ground, we have never come out on the winning side in ten league and two cup games.

Our first meeting there was in the John Bond season of 1983/84 when we lost 1-0 and our first point there came in the 1992/93 season when a John Deary goal gave us a 1-1 draw. At this level, we’ve played there three times previously and not only have they all ended in draws, but all in 0-0 draws. Our most recent goal at Wigan was scored by Alan Lee in December 1999 in the Auto Windscreens Shield and the last league goal was scored by Andy Payton ten days earlier.

Since then, our paths have crossed in just four seasons prior to this with that most recent game coming in the season we won promotion for the first of the two occasions in the Sean Dyche era.

Last season, we were two divisions apart. Now we are together and so we return to the stadium named after someone who broke his leg in a cup final but they’ve had a few changes of ownership since our last meeting including one that took them into administration and almost saw the club go under.

We go there looking for a second league win of the season to add to that victory at Huddersfield four weeks ago. Three home draws wrapped around a defeat at Watford since have seen us drop to 16th in the table but, in this early part of the season, had we held on to beat Blackpool last week, as we surely should, we’d now be sat in the play-off positions.

Embed from Getty Images
Connor Roberts sat out the League Cup win at Shrewsbury as Vincent Kompany made eight changes, but he’s started every league game this season so far and is enjoying his new role within the team. “It’s what I’ve been used to before I came to Burnley,” he said. “I’m playing a slightly different role to what I’ve played in the past in the Championship for Swansea, and for Wales, I’m more of a wing back. I’m more of an outlet and I get into the box more than you’ve found me doing in recent games for Burnley.

“It’s a different role for me coming inside, and I’m enjoying it. All I can do is what the coaches and the manager ask from me. Their feedback is positive at the moment, and I’ll continue to do what they tell me. It’s more normal for me to play this way.”

Although he didn’t play in midweek, the number of games we are scheduled to play suits him. “That’s the nature of the Championship, I love it,” he added. “I prefer getting out there playing games. We’ve had a good few already and we’re only a few weeks in.”

It’s been hectic since the season started with new players continuing to arrive. Vitinho signed on the eve of the Huddersfield game and we’ve made four more signings since to take the total to thirteen, now more than any other Championship club, and with six days of the window remaining.

That, and getting used to Vincent Kompany, has made it difficult to determine what the team might be but there will have to be at least one change to last Saturday’s team with Ian Maatsen serving a three-match suspension.

Wigan had a terrific season in 2021/22, winning League One with 92 points and coming up with runners-up Rotherham and play-off winners Sunderland, and it was their away form that got them there as much as anything with fourteen wins and only three defeats.

Since promotion, no Championship team has made fewer than their three signings. They signed Ryan Nyambe from Blackburn and then added the loan signings of Nathan Broadhead and Ashley Fletcher from Everton and Watford respectively. None of them have, as yet, started a game which has seen them play their first four games of the season with last season’s players.

They have played just four; one of their games was scheduled to be at Coventry, but their only defeat so far has come in the League Cup, losing their first round tie 1-0 at Fleetwood.

Wigan are looking strong defensively in the league with only two goals conceded, those in 1-1 draws against Norwich and Bristol City. They came after a 0-0 draw against Preston and those three games were followed with their first win of the season last Saturday at Birmingham where they won 1-0. James McClean and Will Keane had scored their goals in the two draws with Broadhead coming on as a substitute to score the winner last week, the striker who scored ten goals in twenty League One games for Sunderland last season.

Embed from Getty Images
There will be one familiar face in the Wigan side, former Claret Tendayi Darikwa (pictured above), who now captains the team. He said of Burnley: “It’s a really good club, with a lot of friendly people, and I enjoyed my time there. It will be good to see some familiar faces, but the priority is putting in a good performance and hopefully getting three points.”

Unlike us, Wigan won’t have any players suspended despite Joe Bennett receiving his marching orders at Birmingham. He was substituted at half time in their draw against Bristol City in the previous game having been fortunate not to have been sent off, but ten minutes into their game at Birmingham, he was dismissed by referee Andy Davies for fouling ex-Claret Lukas Jutkiewicz. Subsequently, Lukey Juke was banned for two games for deception and that leaves Bennett free to play.

This was a performance that could be described as a success for the defence with Wigan hardly troubling us all afternoon, but it was a second successive game without a goal scored, having lost at Middlesbrough on Boxing Day, and the small squad was looking to be hitting us as we moved into 2014.

The good news was that we were expected to strengthen the squad during January but this, overall, was a decent performance and saw us go into the new year in third place in the table.