For a shop to be broken into might be considered unfortunate for the shop owners but The Jean Junction in St. James’ Street was targeted on three consecutive nights. Owner Mr Maneer Siddique said: “We are getting rather fed up with all this. They took a large quantity of tops worth about £1,500. They were probably in and out within a few minutes. We have protected the shop as much as we can but other people are not helping us. We wanted to put steel shutters up but Burnley Council said it would be unsightly.” 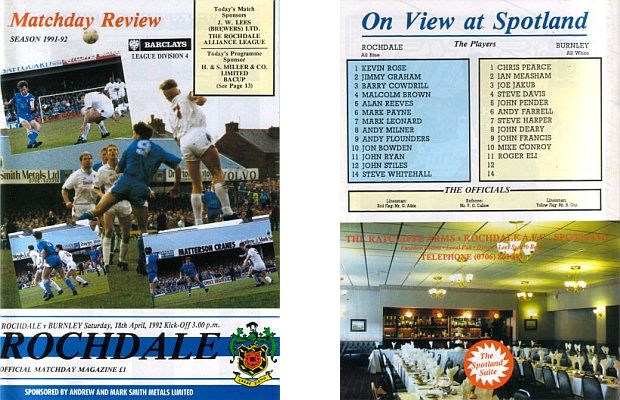 He admitted that he didn’t know how long they could go on. On the first night the thieves had smashed a window to get in, on the other two nights they had come through the roof. This was to add to two other break ins during the previous month.

The Dog and Sardine restaurant in Burnley was in trouble. They’d been found guilty of watering down apple brandy. Owner Dr Marina Hitchen pleaded guilty and was fined £350 at Burnley Magistrates Court. Her defence, Mr Ray Flynn, said it was a complete mystery as to how it could have happened. Only three times had apple brandy been ordered and Mr Flynn said: “It is quite clear that it wasn’t done for profit. If she had wanted to do that then a drink would have been watered which is asked for by more than three people in two years.”

There had been a reaction to the previous week’s events involving Burnley Football Club with letters in the Burnley Express reflecting the promotion, the price increases and also the poor behaviour of Burnley supporters after the final home game against Wrexham.

An unnamed supporter from Radcliffe sent his congratulations on the promotion via the local newspaper but Mr Starkie, an Accrington Road Claret, hit out at the price increases for the next season, claiming the timing was absolutely preposterous. He wrote: “It is diabolical that all the elation felt by so many loyal fans at this time should be ruined by this savage and totally inconsiderate announcement, which absolutely belies the BFC management’s pronouncements of gratitude to Burnley’s faithful following.”

Mr Wallace Chadwick, however, turned his attention to those fans. Having congratulated the team, he went on to comment on the poor quality of some our supporters who he described as morons, referring to attempts to cause trouble at Carlisle and for their use of bad language at York. “There are some among the Clarets supporters that the club would be far better off without,” he said.

In a break with tradition, Burnley Football Club announced that we would play an end of season friendly against Dutch giants Ajax Amsterdam at Turf Moor. A delighted Jimmy Mullen said ahead of the final game of the season, and prior to the end of season trip to Bermuda. “I was greatly surprised to find out that there was a chance of playing Ajax. There have been lengthy negotiations and I can only say that as a manager it is always nice to compete against top class opposition.

“The experience that the players gained from playing Dynamo Stavropol earlier in the season can only have helped their development, development which resulted in the Fourth Division championship. We hope that the match against Ajax will provide the players with the experience to continue to rise up the Football League.”

The game was set for Tuesday, 19th May, but first, and before the Bermuda trip, we had to make a third short journey to Spotland to play Rochdale who were now the team with something to play for. We’d won the league but ‘Dale knew that a win would take them into the play-offs at the expense of Barnet.

For some reason, the Rochdale fans though, given that we’d already won the league, were of the notion that we might be on the beach and give them an easy run to the play-offs. They got excited too, over excited I’d say, when they started well and even went in front after a quarter of an hour.

They’d won a series of free kicks around our penalty area and we conceded one too many. It was chipped into the box but fell towards John Pender who tried to shepherd the ball back to goalkeeper David Williams. John RYAN nipped in, got to the ball and gave Rochdale the lead.

Were we just going to go through the motions? Were Rochdale going to benefit and move into that play-off place? The answer to both questions was an emphatic no and from the restart until half time we played as well as we’d done all season.

We thought Mark Yates had equalised with a stunning effort, only to see it brilliantly saved by Kevin Rose. Steve Harper was tormenting them with a man of the match performance down the left and he played his part when we did finally equalise. It was a brilliant run from him down the left before he laid the ball to John Francis who in turn moved it across to Ian MEASHAM with the right-back scoring only his second Burnley goal.

For the next ten minutes it was one way traffic with the Rochdale goal having a charmed life. Another goal had to come and it duly did. Again Harper was the architect, looping a ball into the Rochdale box. In one movement, Mike CONROY turned and shot. Rose had no chance, it was a brilliant finish from the leading scorer, and it took us into half time with a 2-1 lead.

Rochdale offered nothing for much of the second half other than desperate defence, but for Rose it could have been a cricket score. His best two saves prevented Robbie Painter and Harper from scoring but he could do nothing midway through the half when Burnley completed the scoring.

We won a corner, our seventh in the second half alone. John Deary took it and it was headed on by Pender for PAINTER to head home from close range.

That was it; game won and we played like it. However, with nine minutes remaining we conceded a controversial penalty, the first time we’d given a penalty away in the entire league season. Williams had been at Rochdale earlier in the season and knew where Andy Flounders would place the penalty. He saved it with ease.

The penalty miss ensured Painter scored the final goal of the game to allow him to go into the record books as the last player to score a Fourth Division goal.

Jimmy Mullen was delighted. “We wanted to go out in style tonight and we’ve done just that,” he said. “A lot of people thought it would be easy for Rochdale because we had nothing to play for, but after Saturday’s performance, my players had their pride at stake. We haven’t lost two consecutive league games since I took over, and we certainly didn’t want to sign off by doing that.

“I was thrilled for Ian Measham to get a goal after such a long wait. He gets forward well and has helped create a lot of goals this season. To finish the season with one of his own was a special treat for him. Mike Conroy and Robbie Painter are here to score goals and they showed how tonight.”

It was all over; this special season had come to an end other than the forthcoming Ajax friendly. We’d finally got out of the Fourth Division after seven long seasons.