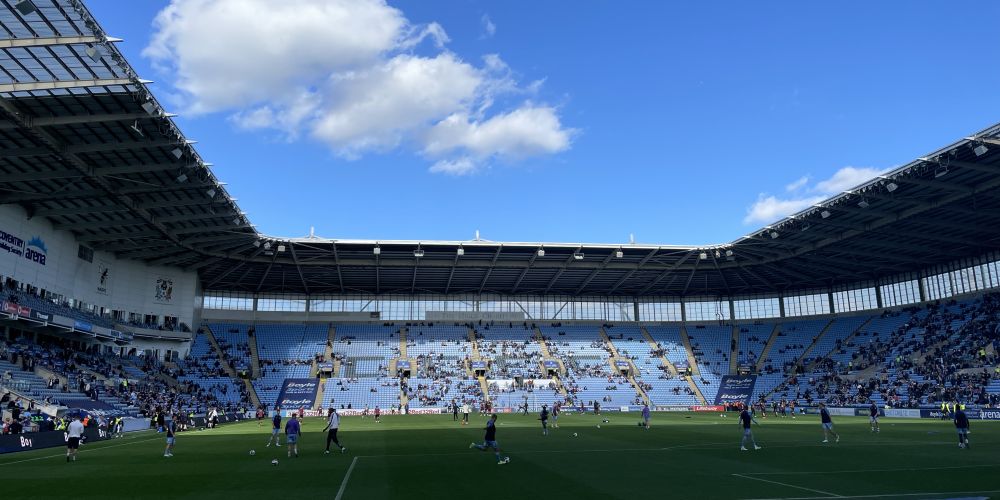 Burnley went 1-0 up yesterday at Coventry but there was no repeat of the recent results with us conceding an equaliser and that ensured we came home with all three points from a third Championship away win of the season.

It has been so frustrating recently, watching us go 1-0 up and then seeing us have to settle for a point from a 1-1 draw. It had happened in four of the five previous games, at West Brom, Preston and Cardiff before a fourth occurrence at home against Stoke.

Maybe it’s no surprise the success came at Coventry. Since suffering three big defeats there in their early seasons in the top flight, trips to Coventry haven’t often ended in defeat and there is nowhere I’ve seen us win more away league games over the years.

This time, it was a Nathan Tella goal just a few minutes before half time that won it for us and deservedly so against a side who really only threatened an equaliser once and while it was never anything approaching a spectacle, it was a performance good enough to give us our fifth league win of the season.

Embed from Getty Images
We didn’t leave Burnley until around 10:30 a.m. for this one having decided on a pub stop after the game rather than before. Of course, a journey to a football match these days can’t be without hold ups of some kind and we were caught up in some congestion on the M6 just south of the Hilton Park services. Other than that, it was plain sailing and we were parked up around a pleasant twenty minute walk away from the ground along the Coventry Canal tow path.

The Burnley team we were about to watch showed three changes from the one that had drawn against Stoke. Arijanet Muric, who ended that game limping, was ruled out giving Bailey Peacock-Farrell his first league start for us since the visit of Leeds in May 2021. Also out were Connor Roberts and Manuel Benson. Both were on the bench with Ian Maatsen and Anass Zaroury coming in, Zaroury getting his first Burnley start.

Vitinho moved to the right-back position with Maatsen on the left. Josh Cullen also moved to the right hand side of the pitch, as did Nathan Tella to accommodate Zaroury. For the first time this season we didn’t play in the home kit while our hosts wore a kit so similar to the one they wore back in the 1970s and early 1980s when, at some point, they wore an identical chocolate brown away kit.

A lot has happened to them since we last played there. They’ve been down to League Two and they’ve spent time playing home games at both Northampton and Birmingham. They’re now back at the newly named Coventry Building Society Arena and they’ve even got a playing surface fit for purpose following the farcical situation that forced them to call off all of their first three home games this season.

Embed from Getty Images
That last visit saw Charlie Austin score a stoppage time winner for us right in front of us and that was the end we played to in a first half that was so similar to the games we’ve seen recently. For long periods, very little happened but invariably it was from us when anything did. Josh Cullen missed the target with one shot, as did Josh Brownhill, and Taylor Harwood-Bellis found goalkeeper Ben Wilson who saved comfortably.

Our only problems seemed to the building number of yellow cards. Jordan Beyer was the first to receive a card from referee John Busby. Jack Cork and Ian Maatsen both followed him before the half time whistle too while some believe Beyer was possibly fortunate not to receive a second yellow and that in a game in which we were only penalised on eight occasions throughout by the referee.

Just before the third of those cards for Maatsen, who was strangely booed throughout by the home fans having played for them last season on loan, we went in front with the one piece of real quality in that first half.

Cullen chipped the ball forward for Tella. He controlled the ball superbly with his first touch on the right hand side of the box before deftly placing a shot past Wilson and into the far bottom corner of the net, going in off the post.

Embed from Getty Images
It was just what we needed but we were so close to conceding soon after when Jonathan Panzo headed a Kasey Palmer header into the bar. It came down, it was close, but it didn’t cross the line and that was as close as Coventry were to come to drawing level in this game. We didn’t know that at the time.

Vincent Kompany made a change at half time, replacing Beyer with Charlie Taylor. Beyer had required treatment following the incident which saw him carded but the manager confirmed after the game that he’d made the change because of the card to alleviate the risk of maybe having to play some of the second half with ten men.

There was no early sign of a response from the league’s current bottom club and Jay Rodriguez should have done better than hit a shot into the side netting when a ball across would have offered us a good chance.

Even so, we looked in total control so Coventry boss decided to change things on the hour by making four substitutions at once. They went on to make their final change closer to the end of the game. The player coming on then was Todd Kane who surprisingly didn’t get any response from the Burnley fans despite him having twice played for Blackburn against us.

Embed from Getty Images
The four man change gave them a bit of impetus but not once did they threaten Peacock-Farrell’s goal and that ensured our goalkeeper won his first league clean sheet for us although it was only his first league start as a Burnley player.

It all ended quite calmly although I was still keeping a close eye on the time even though they weren’t really threatening us. I’m sure, as much as anything, the nervousness came from West Brom, from Cardiff and from that home game against Stoke when we came so close to winning.

Imagine had we won those three; we’d now be well clear at the top of the league. As it happens, we are fourth and are on a run of ten league games without defeat. It’s our best unbeaten run since that incredible 23 in the 2015/16 season having now gone past the eight game unbeaten run in the 2018/19 season.

All the nervousness, all the concern among the away fans, it all ended with the final whistle. We’d got what we came for, another three points.

Embed from Getty Images
All that was left now was for the pub stop. We’d left our car there and judging from the number of supporters making their way back down by the canal, there were many others who’d opted for the parking just a short walk away.

As for the stop. Of course, it’s always easier to enjoy a relaxing drink and food when you’ve won. This particular choice, right by the canal, proved to be a superb choice but eventually it was time to make the journey home and this time it was a trouble free trip other than the M65 closure.

We get a midweek off now ahead of the Swansea game next week when, for once, I don’t envisage the opposition playing a defensive game and dropping deep to invite us onto them. Until then, I’ll enjoy being fourth in the table and just two points behind the three teams ahead of us.

There’s nothing better than an away win.