Assistant manager Clive Middlemass stepped in as caretaker boss when Jimmy Mullen was sacked and immediately threw his hat into the ring for the job on a full time basis. 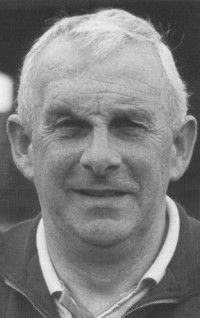 Middlemass had been at the club for over three years, coming in as Mullen’s assistant in the first season following the Fourth Division Championship and was part of the backroom team that led us to victory at Wembley in 1994.

He’d been a player with Leeds and Workington but that came to an end in 1970 following a serious car crash. However, he returned to the game on the coaching side, firstly with Bristol City working alongside former team mate Terry Cooper. From Bristol City he moved to Carlisle, replacing Harry Gregg as manager in November 1987 and was in charge for over three years, losing his job in March 1991 and replaced by Aidan McCaffery.

He arrived at Turf Moor in November 1992, filling a gap that had remained vacant throughout Mullen’s first season as manager, but in February 1996 he had his chance to stake a claim for the job although it was soon obvious he wasn’t ever going to be in the running. In the end he got three games in charge, and as Burnley fans trooped away from the second of those they would have happily accepted anyone else as manager.

The first of the three games was a 3-3 home draw against York City and it was a very fortunate point in a game where we were never in front. There was no such good fortune a week later when we embarked on what should have been our easiest away game of the season, Hull City at Boothferry Park. They were bottom of the league and hadn’t won a home game since August but we helped them put that right with as abject a performance as you were ever likely to see which saw Hull come out of the game as 3-0 winners.

He had just one more game in charge, and that ended in another defeat, this time at home against Blackpool and he then reverted to his assistant’s role for the rest of the season before taking a junior coaching role at Turf Moor for two years. He lost his job at Burnley in the build up to the 1998/99 season and moved to Preston North End to work with David Moyes as chief scout. He spent eight years at Deepdale before ending his association with them and moving on with Billy Davies to Derby. More recently he enjoyed three years on the scouting side at Everton, again working for Moyes.