Andy Cooke scored three times in Burnley’s final day 4-1 home win against Watford in 1997, the first of his two Burnley hat tricks. The big win left manager Adrian Heath determined to build on a season that had promised much but ultimately had failed to reach its targets because of a dismal final eight games.

That game was a quarter of a century ago today and kicks off a new feature on Up the Clarets that will chart the club’s progress from those days in what was then called Division 2, the third tier of English football. 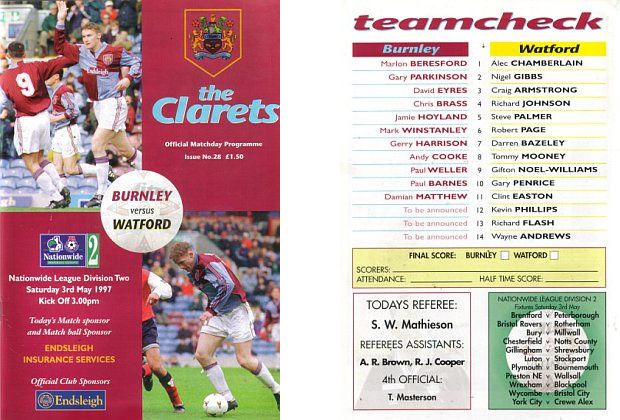 Following this final game of the season, we will check out all the summer news, including signings and departures, before moving into the next season and reporting each game alongside some local news items.

In March of that year, following a win at Walsall, we were in fifth place in the table with all of the four teams above us just a point ahead. Assistant manager John Ward left at that point to manage Bristol City. They were seven points behind us, but as we collapsed without him, winning only one of seven prior to the final day win, they reached the play-offs and went up. We ended the season in ninth place, some sixteen points behind Stan Ternent’s Bury who were champions.

It wasn’t just us; our opponents Watford had suffered similarly. On that date in March they were one of the four teams with a point more than us but by the time this game had been played, they were two places behind us in the league.

It had been a season regarded as a failure by fans, a season when we missed out on a big chance to earn a place back in the top two divisions of English football. The one positive to emerge was the number of young players being thrust into the first team spotlight with all of Chris Brass, Paul Weller and Paul Smith establishing themselves alongside Cook who had stepped up alongside Paul Barnes following the sale of Kurt Nogan to Preston.

It was a season when we smashed the club’s transfer record to sign Barnes and he’d repaid us with 24 league goals while full back Gary Parkinson, a target from the crowd at times, had silenced the boo-boys with a great goal in this final match.

Even before the game, manager Heath was admitting that he needed to stiffen things up down the middle and said he was looking for a truly competitive central defender, a combative midfielder and presence in the opposition penalty area. He promised he would do something about it and had already decided which players must go.

With the pressure off at the end of the season, we played what was described as carnival football by the Burnley Express. We dominated the first half of the game, raining shot after shot at the Watford goal. Parkinson saw an effort cleared off the line, David Eyres was denied by Alec Chamberlain with Damian Matthew hitting the post from the rebound, and all that was in the opening minutes.

And the half ended as it started with Chamberlain making another superb save to prevent Eyres from scoring. It also ended with the scores level and Watford must not have been able to believe they had gone in with the scores still 0-0 at half time.

Nothing changed at the start of the second half with us still dominating but this time the goals weren’t far away. With just under five minutes gone, Barnes broke down the right at pace and crossed. It was met by COOKE who volleyed home off the post.

Less than a minute later, Barnes again broke at pace, this time down the left. The result was the same, COOKE converting with a left foot shot.

Watford couldn’t deal with us and the only surprise was that we had a quarter of an hour to wait for goal number three. It came from a corner taken by Matthew. It fell to PARKINSON whose right foot shot from around ten yards flew into the roof of the net.

Cooke was so close to a hat trick with a diving header but his chance was to come. Barnes was again involved. This time he pressured Rob Page in the box and the Watford player handled. Stockport referee Scott Mathieson didn’t hesitate in pointing to the spot. Barnes and Eyres were the regular penalty takers but they handed the ball to COOKE to allow him to complete his hat trick which he calmly did, sending Chamberlain the wrong way.

Keith MILLEN had the last word of the afternoon, heading home what was no more than a consolation goal for Watford, but it was Cooke’s day, and even the fans went home less disgruntled than in previous weeks. Heath pledged to start quickly to make the necessary improvements.

No matter how a season has gone, be it good, poor or somewhere in between, a final day win like this always leaves you wanting more. Now, the Burnley fans just had to wait to see what Heath would do in terms of squad building during the close season.