When the retained list was announced twelve days ago, the club revealed that under-23 forward Dara Costelloe was one of the players who had been offered a new deal and today he’s signed that deal. 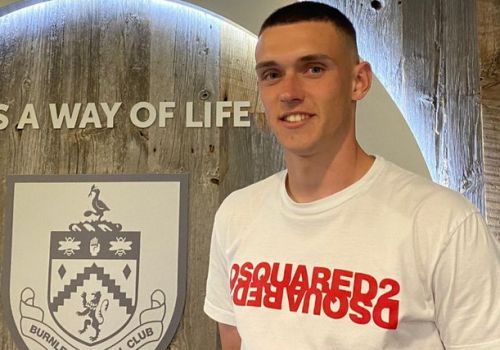 Costelloe has been a Burnley player for more than sixteen months. He’d been training with us during the early part of the 2020/21 season but signed at the beginning of February 2021 on the same day as he’d played a Premier League 2 fixture for us as a trialist against Newcastle.

He was signed from Galway where he’d made a first team debut at the age of fifteen and he continued in the same position at Burnley, wide on the left hand side.

Last season, he was switched, because of injuries, and played up front. Suddenly the goals started coming. He netted a brace at Middlesbrough in the final game of 2021 and went on to score eleven goals by the end of the season.

His form for the under-23s earned him a call up to the first team squad and he was named as a substitute for the home game against Southampton and the remaining six games afterwards although he wasn’t used in any of the games.

In a recent interview he spoke about how well he’s now settled and on signing his new contract said: “I’m buzzing. I can’t wait to get started and see what the season holds. Last season went well for me so I want to kick on, see what this season has to offer and hopefully make a name for myself. There’s exciting times ahead here, it’s a club with ambition, so I’m pleased to sign a new contract. I just can’t wait to get started again.”

No indication has been given regarding the length of the contract for the 19-year-old.