A Ray Pointer goal was enough to give Burnley a 1-0 win at Nottingham Forest sixty years ago and although it means we dropped a place in the table, with Sheffield Wednesday going above us, we were closing in on the top two Tottenham Hotspur and Wolverhampton Wanderers.

The big news at home actually came from France during the week as Mayor Councillor Miss Edith Utley signed the declaration that formally confirmed Vitry-sur-Seine as our twin town. Miss Utley marched behind the Vitry Mayor Monsieur Perrot in a procession that she admitted was a sight that she would never forget. It was led by a brass band and involved many local children in fancy dress and the rear was brought up by ex-servicemen. Once at the Town Hall the two Mayors signed the agreement in front of big crowds (see picture). 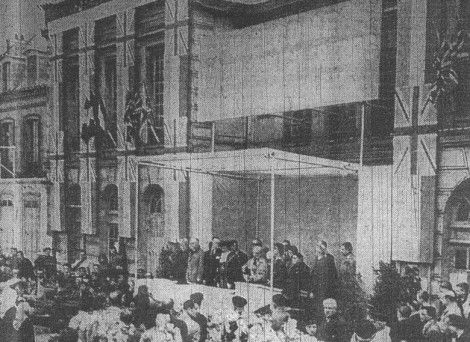 “Unforgettable,” said Councillor Bushby whilst Miss Utley confirmed the words of the French that the pact between the two towns would be of great benefit to the young people. On behalf of Burnley, Miss Utley received a tall vase made in Vitry and bearing the town’s coat of arms, a model of a child which was the work of a local sculptor and a box of wines from the railwaymen of Vitry.

Back home the market traders held a meeting to discuss the potential for moving half day closing from Tuesday to Wednesday. That resulted in 95% of traders not in favour of the change and Mr R. G. Whittaker, secretary and treasurer, said that if the idea behind the change was to attract trade from the outside areas he thought it would be nullified by those areas changing their half day. Mr Whittaker confirmed he would write to the Chamber of Trade, who were relying on the support of the market traders, with their decision.

Burnley’s Chief Constable Mr Leonard Massey was concerned at the number of calls the police were receiving regarding children playing near the canal in town, so much so that he issued a statement about the dangers of this. “Burnley’s canals are both deep and dangerous, a matter of minutes can decide the fate of a young child,” Mr Massey said, continuing: “As the Easter school holidays approach, I appeal to parents to do their utmost to keep their children away from the canals and indeed for every adult to remove young children from canal banks whenever they are found. Only thus can we combat the grave risks that exist for our young folk in the fascination of the canals.” Sixty years on, any adult removing a child from the canal bank might well find him or herself in some trouble with the authorities. How times change.

The ‘Burnley World Refugee Year Fund’ came to an end and a successful twelve months it had been. Street and house to house collections had raised £405 10s 3d whilst another £21 was raised from a clothing collection. It took the total raised in one year to £3,040.

Member of Parliament Dan Jones had spoken out in the House of Commons after pensioners were left out of the Budget. He described it as a gross betrayal of people who might be in desperate need. He said: “My first and main objection to the Budget concerns the old-age pensioners. I make no apology for referring to them because the Honorary Gentlemen opposite are not fair in claiming that the cost of living has not increased substantially since 1958.”

Lemon pies suddenly became popular in town, and no surprise. Redman’s reduced the price of butter by 2d per lb and were selling lemon pie filling for as little as 7d per packet. It left some people with a bit more money and that allowed them to splash out on the new Italian style suits available at A Simon on Market Street and Plumbe Street. They had stripes and checks in the latest designs and from as little as £6 19s 6d.

There were no new suits on view with the star attractions at the Empress Mecca Dansette when seventeen men took place in the ‘Mr Pendle Valley’ body building competition. Arthur Radcliffe won the short men section (those under 5ft 6ins) and the tall men section (over 5ft 6ins) was won by Adrian Shaw. Both had travelled from as far away as Nelson for the competition.

The bars in the new Keirby Hotel opened on time but it was a close thing with electricians working two hours before the doors opened. They’d refused to work overtime and the bars came close to opening with the work incomplete. It was expected that the bedrooms, restaurant and banqueting services would be open for 29th April. But as one door opens another closes, and that was the case at the Yorkshire Hotel where ‘Time Gentlemen Please’ was called for the last time. There were many sad hearts and tears shed by regulars for the premises that were to be demolished to make way for the roundabout alongside the new Keirby Hotel.

Massey’s Brewery might have been celebrating the opening of the new flagship hotel, but they had some trouble with their draymen, well one in particular a Mr William Ellis who had been talking to his workmates about his judo. One of those workmates claimed Ellis was just bragging and before he knew where he was, Ellis had hit him in the face with his fist and then, when he’d fallen, kicked him in the face four times. Ellis appeared in court where Detective Inspector John Rushton said Ellis, a native of Dublin, had been fined for disorderly in June 1959 and twice for assault in January 1960. Ellis had nothing to say and was fined £25 with £8 5s costs. Mr G. Parkinson, presiding, told him: “There is no excuse for a savage assault of this kind and in view of the gravity of it we are going to commit you to prison for three months if you fail to pay at a rate of £2 per week.”

The Lancashire League cricket season was only one week away and both of the local clubs had welcomed their new professionals. Jim Minhas was at Lowerhouse and Dattu Phadkar at Burnley. At a meeting at Lowerhouse to welcome Minhas, captain John Devon promised an improved season, they’d ended the 1959 season bottom of the league, and said that any criticism at all should be directed at him because he would be in sole charge on the pitch.

To football and goals from Roach, Grainger(2) and Bromley gave St. Mary’s a 4-0 win over Rosegrove in the Keighley Cup Final. Played at Turf Moor it was the first time the schools final had ever been played under floodlight.

Burnley travelled to Nottingham Forest and when Mr Harry Potts named the team on the Thursday, two days before the game, there were some changes to be made. With John Connelly on duty with England it meant a first team debut for Trevor Meredith whilst right half Bobby Seith was surprisingly dropped. Jimmy Adamson moved to right half in Seith’s place with Tommy Cummings coming in at centre half to fill Adamson’s position. Alex Elder had reported back from international duty injured and Mr Potts confirmed there would be another debutant in Billy Marshall should Elder be ruled out. We’d beaten Forest 8-0 at home earlier in the season and points were now of utmost importance, even more so with Sheffield Wednesday having drawn in midweek and gone above us in the league.

During the season the weather had been reasonably kind to association football in that it had not spoilt matches by sending one or other forms of variation such as fog or driving snow to interfere with the course of play. However, the game at the City Ground, Nottingham, was almost ruined by the vagaries of a swirling wind which, together with the dry ground and light ball, caused the players to go through some curious contortions in efforts to use the former or control the latter. Indeed, the pitch looked to be one of the roughest seen this season. It was bereft of grass down the centre of each penalty area from goal line to the arc, and in other parts appeared to be bumpy and too well used.

With the surface helping towards mistakes at foot level, the breeze distorted many an attempt to achieve results by means of the long cross field pass which of necessity had to be given a certain amount of air. The breeze proved a saboteur of long range construction play and that popular phrase of the theorists ‘bounce of the ball’ was given a meaning which even they could not have thought about.

Besides all that, all the players had to contend with some curious decisions by the referee. Major Dennis was no strict disciplinarian. He allowed far too much obstruction, harmless in itself but irritating enough to cause howls of protest from the customers. With such conditions it was no surprise that no goal would come and with an hour gone Burnley looked desperately in need of one.

We’d improved after half time and Jimmy McIlroy gave more than mere glimpses of his old form in the second half. He was one of the few able to hold the ball in something like subjection. It was from a Brian Pilkington throw-in that he schemed his way out of an apparent impasse, swung over a right foot centre for Ray POINTER to hurl himself at the ball and hurtle it into the net while he hit the ground heavily and stopped rolling over to gaze anxiously at the referee. Fortunately the Major saw no reason to disagree and that goal was sufficient to win the match.

Burnley stayed fourth despite the win with Sheffield Wednesday also winning at home to strugglers Leeds in a Yorkshire derby. Wolves didn’t play but there was fantastic news from Goodison Park where league leaders Tottenham were beaten by Everton. Burnley were now just two points behind the top two with one game in hand on second place Wolves and two games in hand on Tottenham.

It was a 1-0 double with the reserves winning by the same score at Turf Moor against Stoke. Burnley were much the better side throughout the game but couldn’t add to an eleventh minute goal from Peter Simpson.