Having been beaten at Watford on the opening day of the season, hopes were high when we travelled to Lincoln City in the League Cup, but it took an equaliser from debutant Lee Howey to earn us a draw from the first leg.

The week started badly for one Burnley family when four-year-old Daniel Lord was mauled by Laddie, his uncle’s Bedlington Lurcher. It led to the young boy requiring twenty stitches to a head wound and a further ten around his ear. 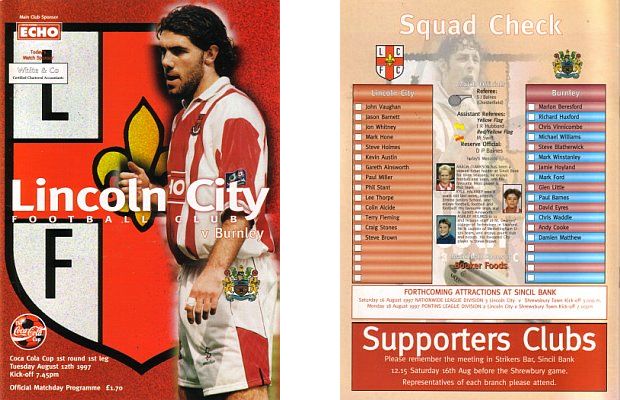 Thankfully, the damage wasn’t as bad as first feared and he was soon back home riding his tricycle. His mum Hayley said: “It was just like a split second thing but Laddie being as big as he was, if he wanted to do some damage he could have done. The first thing was to get him inside and see what his injuries were. I just saw the cut on his head and phoned the ambulance.”

Her brother took the decision to have the dog put down and said of him: “I think he was blaming himself for Daniel’s injuries but there is no one to blame. No one can predict what’s going to happen.”

There was a huge blow to local people working in the footwear industry. Workers at Lambert Howarth in Burnley were told that most of the two hundred employees were to be made redundant. Bosses at the Healy Royd Mill site informed the workforce that they had no alternative but hoped that 46 of them would be able to fill vacancies at other sites.

The reasoning was the change in fashion which had led to more people opting for more sporty footwear than previously. Director Mr Gary Smith explained: “They have forced us to make drastic changes to the function of our Burnley site. This involves closing down a specialist manufacturing process producing ladies’ court shoes. Every possible solution has been explored, but the company is left with no other alternative but to make many of the two hundred employees at our Healy Royd Mill redundant.”

The oft-maligned Trafalgar Flats were coming to an end and that would bring with it an end to the antics of the firebugs which had left fire fighters fed up with constantly being called out to the remaining, derelict blocks. Hearing the news that the ten remaining blocks of the arson-hit site had been handed over to Wimpey Homes, manager at Burnley fire station, Mr Paul Harvey, just said: “It’s not before time.”

Councillor Rafique Malik, the chairman of the council’s Housing and Community Services Committee, said: “We are delighted to see the beginning of the end of this eyesore. It has been worrying us from a health and safety point of view.”

It was confirmed that the remaining blocks would be demolished by November with a show house available by January with Wimpey Homes to build ninety new houses and twenty-four flats.

A policewoman got more than she bargained for when she was called to a disturbance in Reed Street. She found two men fighting, one of them protecting his sister-in-law and the other her former boyfriend who, it seemed, thought she was still interested in him. It landed the ex-boyfriend Martin Smithstone in court after he punched the policewoman twice. His defence said he’d not intended to assault her, that he was just lashing out and recklessly hit her. It didn’t wash; he was fined £100 with £30 costs.

While the football club were kicking off the season with a defeat at Watford, there wasn’t good news coming out of either of the local cricket clubs. Burnley had reached the final of the Worsley Cup but took a hammering against Haslingden in the final, losing by over a hundred runs. At Lowerhouse, professional Corrie Jordaan had seen his contract cancelled after what were described as perceived differences in the dressing room. Captain Matt Hope explained: “We have not fallen out with Corrie in the slightest and talk of player power forcing him out is ridiculous. We just felt we were entitled to voice our opinion and ten out of eleven players said they wanted a batting professional.”

A day before the League Cup tie at Lincoln, Burnley completed the signing of Lee Howey from Sunderland with Chris Waddle confirming that he would make his debut at Sincil Bank although where on the pitch was still to be determined. Waddle explained: “I don’t know yet whether to play Lee up front or at the back. It is a tough baptism at Lincoln for him, but he has played in non-league football, like myself, and I am sure he has played more than enough of that sort of physical game to cope tonight.

“It won’t be strange to him. He trained yesterday with us for the first time and looked very sharp, and of course he is another player who played Premiership football last season. He is a good footballer, is also big and strong, and I am sure he will prove and excellent player for this club.”

Waddle made two changes to the team that had played at Watford. Chris Vinnicombe came in at left-back which released David Eyres to move into a more forward position with Waddle leaving himself out. Phil Eastwood, who had debuted at Watford, was replaced with new boy Howey partnering Paul Barnes up front.

As expected, we were put under enormous pressure by John Beck’s direct team and found ourselves outfought at times during the first half. We were struggling with the long throws and long balls punted into the box for Lincoln’s big forwards but to our credit we stood up to the barrage.

If anyone was going to really cause us problems it was Phil Stant, described in the Burnley Express as being one of the Ronnie Jepson school of haunting Burnley. He came close twice and then did as he often did against us, he scored. He hooked one shot over the bar and then hit a volley towards the top corner that brought a stunning save from Marlon Beresford.

Almost immediately, we were close to going in front. Michael Williams set up Eyres to cross the ball for Barnes but the normally reliable striker didn’t get a good enough contact on the ball and glanced his effort wide. It led to our best spell of the first half but it ended six minutes before the break when Lincoln went in front. Steve Holmes chipped a free kick into our box. We twice failed to deal with things and when the ball dropped for STANT he hammered home.

We got to grips with things much more in the second half and had chances to level. Eyres latched onto a Beresford kick but fired wide and then Howey was denied by a goal line clearance with Steve Blatherwick seeing his follow up shot blocked.

Lincoln responded only to see Beresford make another outstanding save but then, with just thirteen minutes remaining, we drew level and it was almost Lincoln style. We won a free kick that was taken by Damian Matthew, who had come on as a substitute for Eyres. Matthew picked out HOWEY who made no mistake, getting through a crowd of players to head home.

Lincoln stormed forward and thought they should have had a penalty but referee Steve Baines, a former player himself and the league’s most lenient referee, waved away the claims despite their manager Beck chasing down the touchline to remonstrate with him.

It was the last action of note and it was considered a good result against such a physical team with us now very much favourites to go through in the home leg.

Nottingham Forest were the biggest winners, beating Doncaster 8-0 and in the away leg too. Bury won 3-2 at Crewe and fielded seven players who had played or would play for Burnley. Dean West, Lenny Johnrose, Adrian Randall and Peter Swan all played and their three goalscorers were Gordon Armstrong, Ronnie Jepson and David Johnson.

Andy Payton scored the opening goal as Huddersfield beat Bradford City 2-1 and John Gayle scored Northampton’s first as they came from behind to beat Millwall 2-1. Rochdale were beaten 3-1 at home by Stoke; Robbie Painter netted their only goal and David Reeves scored twice for Preston with them winning 3-1 at Rotherham. Mike Conroy, who had scored in the league on the Saturday, was on the mark again for Fulham. They won 2-1 at Wycombe and he scored the winner.

Three different players scored twice each in that big Forest win, namely Dean Saunders, Jon-Olav Hjelde and Pierre van Hooijdonk but the honours in this week must go to Mansfield’s Iyseden Christie who scored a hat trick in the space of four minutes as they beat Stockport 4-2 at Field Mill.