Defeat at Wigan in first leg of the Rumbelows

Any hopes Burnley had of recovering from the 1991/92 season opening day defeat at Rotherham with a cup success looked very unlikely as we returned from the first leg at Wigan with a 3-1 defeat and a two goal deficit to recover at home. 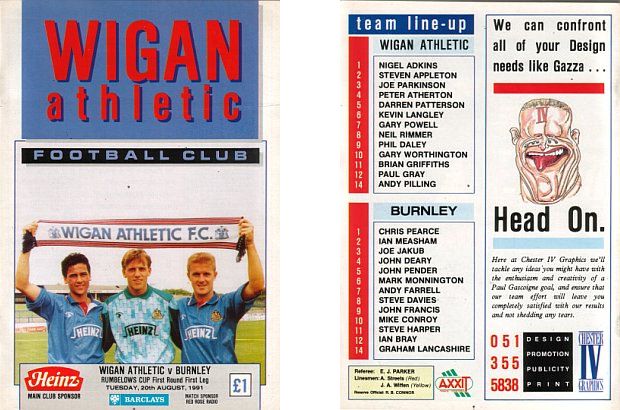 Away from sport the big news in town was in education where Habergham High School and Sixth Form Centre (previously Burnley Grammar School for Boys and Burnley Girls High School) were considering opting out of local education authority control. It might not sound like big news now but there was a right old furore about it with strong support from various quarters for things to remain as they were. To calm things, headmaster at the school, Mr David Clayton (a Burnley supporter and season ticket holder no less) confirmed that it was still early days and they were only at the talking stage. One thing for sure is that the right decision would be made and that it would bring great benefits to the schools of Burnley for years to come.

“Operation Cab-in-Net” had been in full swing to check out the state of taxis in the borough. Councillors were told that they were about to see a horror report. A total of 31 taxis were examined and there were problems with most of them with one startling concern that no less than 11 of them were deemed unfit for service. There were warnings of further implications should there be no improvement. It is thought that, 30 years on, none of those 11 unfit vehicles are now in service.

As Burnley prepared to travel to Wigan for the game it had been an enjoyable weekend of cricket in the town with mixed fortunes for our two Lancashire League clubs. Burnley had recorded victories against both Rawtenstall and Colne. On the Saturday the win over Rawtenstall was by over 100 runs with professional Chris Mack returning bowling figures of 7/40. The day after Burnley won at Colne where opening batsman Duncan Spencer was left stranded on 99 not out as Burnley’s innings ended on 211/1.

Lowerhouse had no such success, losing at Haslingden and then suffering a similar result at home to Nelson the following day. Even so, it was a special weekend down at the West End where one young cricketer was remembered and another ended a 34 year wait. Craig Heaton had sadly passed away at just 21 years of age a year earlier and the weekend’s cricket got underway when youngsters from six local schools played for the Craig Heaton Memorial Trophy. In the defeat at Haslingden on the Saturday, Chris Blezard, another young Lowerhouse cricketer scored 101 not out and in doing so became the first amateur Lowerhouse batsman to score a century since Maxie Mahmood in 1957.

In the Rumbelows Cup, Burnley had drawn third division opposition in Wigan Athletic. It was a tough draw against a side who had comfortably ended the previous season in mid-table in their league. Manager Frank Casper, disappointed with his midfield at Rotherham, made two changes with Ian Bray coming in at left back and Roger Eli up front. This allowed Joe Jakub to return to his more comfortable position in midfield and John Francis dropped onto the right hand side after partnering Mike Conroy previously. Both Andy Farrell and Steve Harper were relegated to the bench.

The start was a disastrous one as we fell behind in only the fourth minute. Goalkeeper Chris Pearce failed to deal with a cross-cum-shot from Joe Parkinson following a corner and it left Darren PATTERSON with the simplest of tasks to head home. Burnley needed a reply, and it came within just four minutes from the same pair who had fashioned the goal at Rotherham. Francis got down the right wing, got to the line and pulled the ball back for CONROY who scored at the second attempt.

Eli was certainly making a difference for Burnley and Wigan’s way of stopping him was via a shocking challenge from Phil Jones. The Wigan player was yellow carded by referee Jim Parker who also showed his card to Francis who had decided to have his say on the matter.

Burnley were badly hit midway through the half when Joe Jakub, who had not missed a first team game since re-signing for the club two years earlier, was stretchered off with Farrell replacing him. For the rest of the first half we dominated the play but the opportunities in front of goal were falling to Wigan and but for a superb save from Pearce to keep out Brian Griffiths we could easily have been behind again.

The second half started really well and Eli was very close to giving us the lead but then came a bizarre moment that changed the game. Wigan knocked a free kick into our box and, as we cleared the ball, referee Parker pointed to the spot. No one else had a clue as to why the penalty had been given. Parker later claimed that he’d given it for a defender holding an opponent but video evidence showed he’d made a serious mistake. That was of no use to Burnley as GRIFFITHS sent Pearce the wrong way.

The game became scrappy after that but for Burnley to bring just a one goal deficit back to Turf Moor was not too bad. Then, close to the end, Gary WORTHINGTON headed home a Phil Daley cross and Wigan were 3-1 winners.

Frank Casper was disappointed with the result and accepted it left us with a difficult task in the second leg. But he also thought there were positives to build on after the disappointment of the game at Rotherham. “I thought we played a lot better and were more settled than we were on Saturday,” he said. “We pushed forward more and got away from our area, but sometimes referees’ decisions change games.” There was real concern for Jakub although x-rays revealed nothing was broken. “We have to wait for the swelling to go down so that we can see just what the damage is, but it’s a relief to know that nothing is broken,” Casper explained.

The teams at Wigan were;

There was some good news with the reserves kicking off their season with a 1-0 home win against Preston at Turf Moor. The goal came midway through the second half and was scored by Carl Alford who was the only player in the starting line up to have no first team experience. It came when Jason Hardy got in a cross from the left wing that eluded everyone other than Alford at the back post who made no mistake from six yards out. The Burnley team was: David Williams, Paul McKay, Jason Hardy, Paul France, Neil Howarth, David Hamilton, Peter Mumby, Danny Sonner, Graham Lancashire (Simon Wallace 68), Carl Alford, Steve Harper. Sub not used: Andy Lawson.

Some of the other games in the Rumbelows Cup provided goals galore with no less than 10 in the game between league newcomers Barnet and Brentford with just one less in Preston’s win over Scarborough.