Burnley have strengthened their defensive options with the capture of 24-year-old Swedish international Hjalmar Ekdal from Djurgårdens IF on a four and a half year deal for a fee believed to be around £2.4 million. 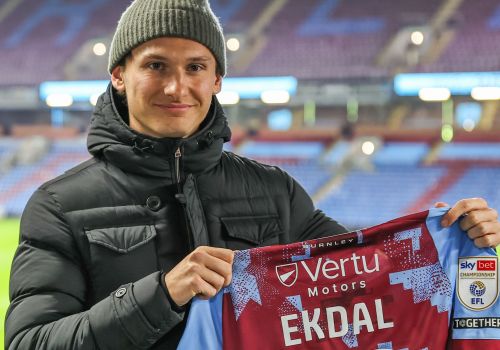 The central defender has played virtually the whole of his career in his native Sweden although he played twenty games for UNC Wilmington Seahawks in 2017 while studying in the United States of America.

Back home, he signed for IK Frej in 2018, then in the second tier of Swedish football and he also got a top division debut, playing once for Assyriska FF on loan. In 2019, he signed for Hammarby IF but immediately returned to Frej on loan and then enjoyed a loan at IK Sirius. His performances for those two clubs won him the deal to Djurgårdens in January two years ago and he’s gone on to establish himself at a club who regularly play in Europe.

He’s played three times at full international level for Sweden, making his debut in a Nations League game against Serbia in June last year. His brother Albin Ekdal, who currently plays for Spezia in Italy, has played 66 times for Sweden.

On completing his move, Ekdal said: “Burnley and Kompany have done amazing things so far this season, it’s something I really wanted to be a part of. It feels really good, I can’t wait to meet the team now and play in front of the amazing crowd at Turf Moor.”

Hjalmar is now a Claret. He’ll wear the number 18 shirt vacated by Ashley Westwood, and we welcome him to Turf Moor and wish him the very best.