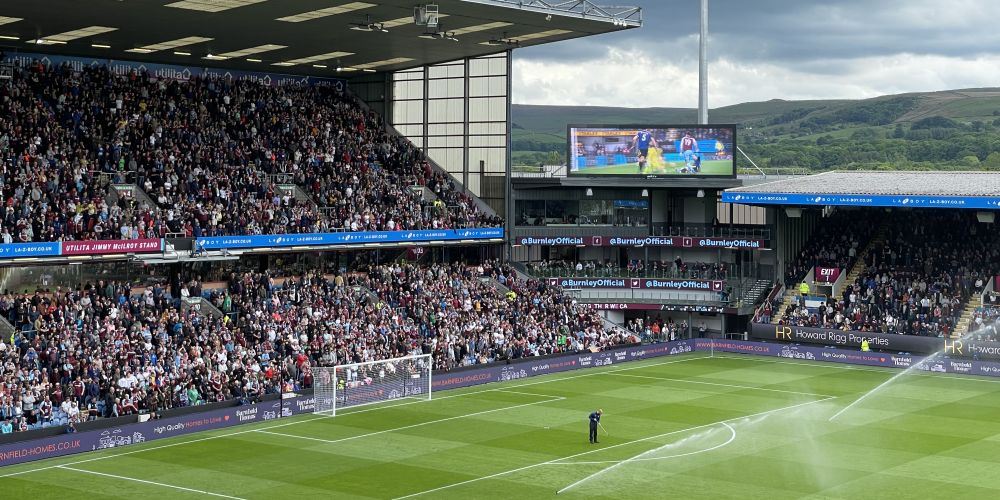 On a day that started with nerves for most of us, we were beaten 2-1 at home by Newcastle United, a result that, combined with Leeds winning at Brentford, condemned us to relegation back to the Football League after six consecutive years in the Premier League.

The draw at Aston Villa had left us in pole position, knowing that we needed to do no more than match the result Leeds got at Brentford, but in an emotional ninety minutes, we weren’t able to do that.

For the first time since becoming interim manager, Michael Jackson named an unchanged line up, but it wasn’t an unchanged team with Nathan Collins moving to right-back in a 4-4-2 system and Connor Roberts positioned on the right hand side of the midfield. It seemed a little strange to use those two players in positions they’ve previously not occupied all season.

We fell behind in our game in the 20th minute when once again we saw the referee, in this case Craig Pawson, make a visit to the pitch side monitor and then turn to award Newcastle a penalty having previously failed to give anything. This time, however, he’d got it absolutely spot on.

Embed from Getty Images
Collins had made a real mess to all but set Newcastle up for a chance but managed to get in and concede a corner to recover it. When that corner came over, he inexplicably handled it and there could have been no other decision once Pawson had been given another look. Callum Wilson, who hadn’t scored since he got the winner against us at St. James’ Park at the beginning of December, sent Nick Pope the wrong way to net.

The score remained that way until half time. In truth, we’d played very poorly. Was it nerves? Was it the formation and the players in it? Whatever the reason, we deserved to be behind and only a Pope save from Allan Saint-Maximin close to half time prevented it from being worse. A speculative shot from Dwight McNeil was the only occasion we troubled Newcastle goalkeeper Martin Dúbravka.

One substitution saw some positional changes ahead of the second half. Roberts was withdrawn with McNeil moving from left to right. Maxwel Cornet took up the position on the left with Wout Weghorst coming on to partner Ashley Barnes.

It didn’t make much difference. Newcastle still looked by far the more likely and then bad went to much, much worse in a short space of time. Firstly, news came through from Brentford that Leeds had gone in front with a Raphinha penalty and minutes later we were 2-0 down when Charlie Taylor lost Wilson to get on the end of a ball in from the left to double Newcastle’s advantage.

Embed from Getty Images
At this point, my usually at least half full glass had emptied. I didn’t see us turning this one round and suspected we’d need Brentford to score twice.

Then, Collins got down the right and crossed for Cornet. He saw his shot blocked but he hammered home the rebound. There was hope but no more than hope.

Just a few minutes later, Turf Moor lifted. It was news from Brentford that Sergi Canos had equalised for the home side. Now, we just needed a goal.

Almost immediately came another huge roar from the Burnley crowd. Brentford in front? We thought so, I was suddenly filling my glass again, but Brentford hadn’t scored. Already down to ten men because of an injury, Canos had been sent off. We had to hope they could keep it at 1-1 while we found another goal.

Embed from Getty Images
Having been poor for so long in the game, our goal had given us a real boost and to be fair we gave it a real go. Cornet headed straight at the keeper, we had a couple of efforts cleared off the line and right at the end we saw Dúbravka save from Barnes. The goal just wouldn’t come.

It was all over; we were beaten and Leeds just put the tin lid on it by scoring a winner in the fourth minute of stoppage time to take them three points ahead of us.

The next time we play a competitive game, it will be back in the Championship, the very league we left six years ago on that wonderful day at Charlton.

We’d played the first four games of the 23 undefeated when Up the Clarets was launched so for much of its life we’ve been a Premier League club. For now, it’s over. Yesterday was a difficult day to deal with for those of us who care so much about our football club.

Embed from Getty Images
Things are going to look a lot different by the time we start again. We’ll have a new manager and some new players, while others who have served us so well will almost certainly be leaving.

It always takes a while to get over a relegation and this one is going to be another difficult one to deal with.