Burnley had to get back in the saddle after the first defeat of the season saw Orient take both points at Turf Moor in 1972 and were quick to put that loss behind them with a 1-0 win in what was our first ever league game against Brighton and Hove Albion. 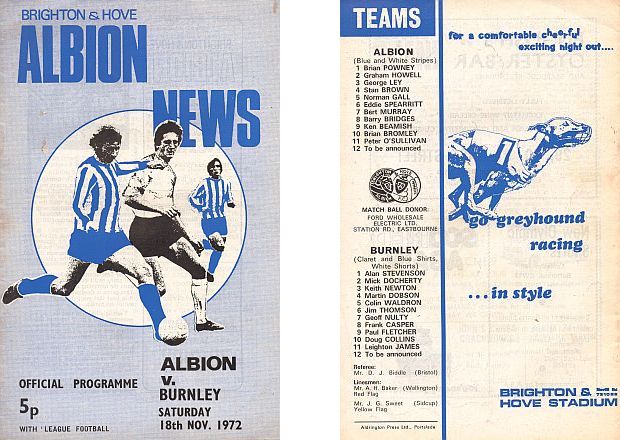 In town it seemed that every week it was hooliganism and vandalism that was grabbing all the local headlines. It had got so bad that a meeting was held with representatives from the police, local magistrates, corporation services and facilities affected by vandalism and hooliganism, Chamber of Trade and Chamber of Commerce. Alderman Thomas Gallagher was leading the fight and ahead of the meeting said he had news of old people being intimidated. “I have proof and concrete evidence that intimidation is going on,” he said. “And it is going on in a big way. I shall present this evidence to the meeting. I receive a terrific number of letters and telephone calls on this subject.”

When the meeting was held, Police Superintendant Thomas Beardsworth reported that there had been 62 convictions for offences involving vandalism in the previous six months. After the meeting, Alderman Gallagher revealed: “There are certain things that came out of the meeting that we feel should be kept secret. We don’t want to reveal what we decided, because it would beat the object. However, our measures will mean a dual attack on those who commit violence.” He added: “Unless we can get co-operation from the public, particularly parents – and we still say parental control is the main thing that can help – we can’t expect a great deal of success.”

It was a difficult time for one Burnley lady who was waiting anxiously for news of her 32-year-old son who had suffered head injuries in a fall in South Africa where he was working. For a month Mrs Dyson of Berry Street had heard nothing of her son Eddie.“This is making me ill,” she said. “All I have heard is that he suffered a brain haemorrhage in a fall, and that he has been transferred from South Rand Hospital to Sterkfontein Mental Hospital. I do not know how the injuries were caused, why he has been transferred to a mental hospital, if his injuries are permanent, or whether he will be able to come home again. I wait for the postman to bring me news, but I hear nothing. I cannot eat or sleep properly for worrying.”

MP Dan Jones was called in to help and he sent a letter to Foreign Secretary and former Prime Minister Sir Alec Douglas-Home. A letter followed from his Parliamentary Under-Secretary who confirmed that Eddie was improving but that he was expected to have a long stay in hospital. Mr Jones said: “The injuries are so serious that the point arises about his future when he is finally discharged from hospital. There remains a possibility that he could be permanently disabled in some way.” He promised to get some assurances from the company who Eddie had gone out to work for, that they would see to his safe return home should the necessity arise.

There were some interesting court cases during the week and that included a teenager who attacked a police vehicle. Having been ejected from the Swan Hotel he tried to start a fight which was spotted by police officers. He was told to move on but instead, in an almost Fawlty Towers style attack, started threatening and punching the police Panda car, shouting: “Get out. I’ll murder you.” In court, he said he could remember none of it and was fined £5 for being drunk and disorderly. Another teenager stole golf clubs to the value of £7.60 from Arthur Benn Ltd. in Yorkshire Street. He told police that it was the biggest mistake of his life and he told the court, where he was appearing for the first time, that he was deeply ashamed. He apologised, then asked for a further offence involving theft of property valued at £6.60 to be considered and also an offence of handling stolen goods valued at £3.25. He was given a 12-month conditional discharge.

A 24-year-old, and an ex-Grammar schoolboy at that, was sent down for 30 months after being found guilty of burglary at Barden Mill which involved the theft of 900 yards of material valued at £348. I thought the sentence looked a bit harsh but then read that he had asked for a further 27 offences to be taken into consideration. Three more men, two in their 20s and one in his 50s, all pleaded guilty to the theft of £300 worth of men’s underwear from the Suntex warehouse in Elm Street. They worked in the other half of the building and got through the petition. The two younger men were each fined £100 with the older man receiving a fine of just £25. I could only presume he didn’t have as expensive a taste in underwear as the other two.

If it was live entertainment you wanted then the Mudlarks were appearing at the Cabaret Club in Rosegrove, but the big night in town was still to come at the Cat’s Whiskers where the live show was to be provided by the players of Burnley Football Club although there were some complaints of people being priced out with the ticketa sold at 30p each.

Despite losing to Orient a week earlier, Burnley were still top of the league on goal average and one First Division footballer revealed that he hoped Burnley would be promoted. That was Liverpool’s Steve Heighway. He said: “They strike me as being a cut above second class football. To me there always seems to be a rather arrogant air about Burnley’s approach to making a go of football in competition with the big city clubs. That may sound as if I’m being critical but it isn’t so and certainly they have produced some excellent players of genuine talent over the years. I’d like to see Burnley go up next spring. Not just because they’re a Lancashire club, but because I believe they would be an exciting addition to Division One. They play football with flair and imagination and I believe they would draw the fans who want to watch teams which provide entertainment.”

Ahead of the long trip to Brighton there had been doubts over the fitness of Martin Dobson, but he’d been cleared before the team set off and assistant manager Joe Brown said: “They were obviously disappointed last week, but disappointment doesn’t last for ever. Now the players are raring to go. They want to redeem themselves after such a defeat. They are a bit like an expectant father waiting for Saturday.”

For me it was another new ground, my first visit to the Goldstone, another ground that in 2020 is long gone. It was a long journey for me too, leaving Sheffield on the Friday and staying with friends in the South East before heading down to Brighton on the Saturday.

With Dobson passed fit, we were once again unchanged but Brighton manager recalled former Claret Willie Irvine and gave a debut to 18-year-old Stephen Piper, a local boy with no previous experience of senior football.

The moaners had been out in force for seven days. They’d revelled in the shock home defeat against Orient and were quick to tell others that it was the beginning of the end of any hopes Burnley had of winning promotion. The more confident supporters, and I was young enough not to be quite so cynical back in 1972, didn’t think that was the case. We might not have been proved right at Brighton but we got the boost of a win in a performance that shouted loud and clear that the Orient defeat was no more than a hiccup. We won the game 1-0, but, make no mistake, Brighton were a well beaten side by the time referee Don Biddle blew his final whistle after Burnley had turned in what was one of the best performances of the season so far.

The first half proved to be a bit of a battle as both teams did their utmost to gain the upper hand. There was little between them and either side might have scored. Brighton’s best chances came very early in the game but Burnley settled but there were twenty minutes gone before we got in our first telling effort, a Geoff Nulty header from a Leighton James free kick. As the half wore on, Burnley came more and more into it with Frank Casper, strangely subdued in recent games, coming to the fore. In the last ten minutes of the half he might have scored twice and also set up an opportunity for strike partner Paul Fletcher. It was still 0-0 at half time with the last action of the first half seeing James clip a post. Things were looking good for us as we went into the interval.

We just needed a goal and we didn’t have long to wait. In the first minute of the half we won a corner after a superb run down the left by James. He took it himself, DOBSON made a great run to the near post to head home. Goalkeeper Brian Powney got a hand to it but could do no more than push it into the roof of the net. Dobbo said of the goal: “Normally when I go to the near post, Leighton drives the corner hard and I flick the ball on across the goal. This time he chipped it and pulled the ball a few yards farther out to give me room to head it inside the near post.”

A goal was all that was needed. Any anxiety was gone and we started to play with all the composure and assurance seen so often in previous games. Brighton were pushed further and further back as we took control. Fletcher came close, so did Dobson and Casper and all that was missing was the insurance of a second goal. It didn’t come and in the last five minutes, with Doug Collins and James dictating things, we frustrated Brighton by having almost all the possession. Burnley were back on form, Burnley were back winning games after the shock of the previous week, and Burnley were still top of the league.

“There had been a certain amount of tension in our play,” Adamson said. “Players were too anxious to do well. Although we fought hard at Millwall and Middlesbrough we have not played well for a while. This was our best footballing display for several weeks. I thought we played some wonderful stuff, particularly in the second half. If you go through the Burnley team there was not one player who had a bad game. Geoff Nulty was particularly outstanding. The number of times he turned defence into attack were countless. Leighton James and Frank Casper both had their best games for several weeks. We were very tight at the back, which was very pleasing to see. My only criticism is that we should have scored more goals. However, the point was, could we start winning again? And we did.”

It had been another good week for us with top teams failing to win again. The biggest shock came at Loftus Road with Millwall, bottom at kick off, beating QPR, the team behind us on goal average, 3-1. That result ensured we went two points clear again at the top.

Last week, I reported that Stan Ternent had scored the winning goal for Carlisle against Sunderland, this week Middlesbrough were beaten at Sheffield Wednesday with Jimmy Mullen scoring the winner. And one other Burnley connection. Peter Noble was a scorer in Swindon’s 3-1 win against Orient. The league leaders were now preparing for Nottingham Forest’s trip to Turf Moor a week later.