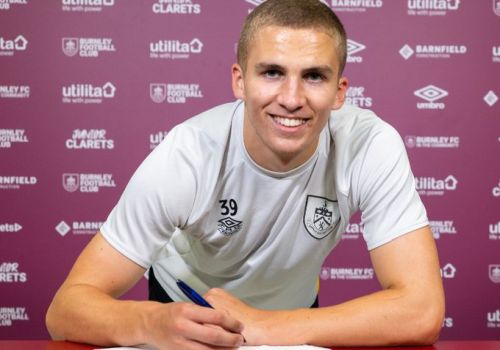 Owen Dodgson, who made his first team debut in last season’s FA Cup tie against Huddersfield Town, has today signed a new three-year contract with the Clarets.

Dodgson joined Burnley in November 2020 from Manchester United and has progressed well to become a regular in the under-23s, playing either at left-back or on the left hand side of midfield.

He kicked off his Burnley career at left-back in the under-18s, playing alongside Calen Gallagher-Allison who had signed, also from Manchester United, on the same day, but he quickly found his feet at under-23 level and last season, having graduated from the under-18s, was one of the first names on Michael Jackson’s teamsheet.

The 19-year-old from Lancaster, has now committed to the Clarets until the end of the 2024/25 season and said: “I’m buzzing to get it over the line, I have worked my hardest to get to this point, but it’s only the beginning now. “I want to keep pushing, working hard and seeing where it takes me.

“It’s a fresh start here, new manager and coaching staff and an opportunity to show them what i can do, but the most important thing is to keep working hard and earn them opportunities of first team football.”