Burnley’s hopes of becoming the first team to lift the Football League and FA Cup double in the 20th century came to an end at Ewood Park of all places as we crashed out of the cup in a 6th round replay. Almost 54,000 were there to see the game go into extra time before two Blackburn goals secured their win and earned them a semi-final against Sheffield Wednesday at Maine Road.

We know games between these two clubs can often be considered ‘high risk’ but I think the news of gun smuggling in the town was something new ahead of this game. It turned out to be nothing to do with the football, but the curator of Towneley Hall, Mr Hector Thornton, was far from happy that someone had walked out of the Hall with two rifles from an antique collection. “How they got these rifles out is just a puzzle,” said Police Inspector John Rushton. “They have little value other than historical and we suspect teenagers.” One theory was that the guns looked similar to those used in the Wild West and it was thought that children might want them to play Hawkeye in their own version of ‘The Last of the Mohicans’. Poor Mr Thornton, he really was annoyed. “To ruin such an antique and comprehensive a collection as this for a reason like that makes my blood boil,” he said.

Meanwhile, two Burnley children were to have their paintings displayed in an exhibition at Towneley. They were two of over 200 paintings that had been organised by BBC Children’s Television ‘Sketch Club’. 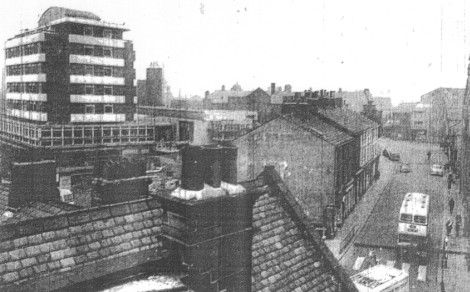 From Towneley and into the town centre and what was described as a moment to savour, although sixty years on the sight of this building would not be considered that by many. It was the day when Burnley folk got their first full view of the new Keirby Hotel with the scaffolding having been removed. The picture shows the hotel in all its splendour and the bus to the right of the picture is just about to leave Yorkshire Street for St. James’ Street.

The local McCulloch family had emigrated in 1952 to Southern Rhodesia, but after eight years made the decision to return home because of homesickness. They had one son when they left England but set on their journey home with three more young children. The journey was 6,700 miles and they decided to come home in a van. They were well prepared and had maps for their journey, along with food and camping equipment, and had also received the necessary inoculations against tropical diseases. They made it back to Burnley but it was an interesting journey that saw them offered £100 by a fruit market stall holder for their three-year-old daughter Maria and then they broke down in the middle of a leper colony. The journey took them through the trouble torn Belgian Congo and at one point they faced angry natives in full war paint carrying knives. Mr McCulloch said on arriving back in town, “We’re glad to be home.”

A week in 1960 wouldn’t be complete without a few young boys getting into trouble and this particular week was no exception. Two 11-year-olds decided to break into a shop. One stood on watch while the other broke a window pane to get in and steal £3 5s. The same two boys also admitted stealing £1 4s 6d from a local mill. They hid the money under the floorboards in one of their bedrooms and some underneath a garage. But they were caught and the Juvenile Court fined them both £2 to be paid at 2s per week.

That was nothing compared to a 13-year-old who became a gang leader for some excitement. He was the leader of a gang of seven boys who between them committed 77 offences and stole more than £70 worth of property. The court was told that the leader was an intelligent boy who had resorted to delinquency as an outlet for his vitality and imagination, and it was likely that his interest in this enterprise was a searching for excitement and adventure for his own sake. Probation officer Mr N. Yates said that the position was aggravated by a number of the boys being in the same class at school. All of the boys were punished by the Juvenile Court in varying degrees. The leader was placed on probation for a year, was ordered to attend an Attendance Centre in Accrington and was fined a total of £4. Mr T Cook, presiding, told all the boys that their action in breaking into places and stealing property which did not belong to them was disgusting behaviour.

And so, four days after the 3-3 draw at Turf Moor when Blackburn came from 3-0 behind, it was off to Ewood where Burnley made a reluctant and lingering farewell to the FA Cup competition of 1960 as Blackburn Rovers showed us the exit during extra time. Just to emphasise that Lady Luck, so necessarily an ally in this difficult journey along the Wembley road, had finally withdrawn her favours the all important first goal came in the 13th minute of extra time.

However disappointed the supporters were with the result, they must have been more shattered by the play of their team. It was one of Burnley’s worst games of the season, and proved an ironic climax to the weeks of hope and months of preparation. This was nothing like the first game and in the replay Adam Blacklaw had a busier night than Harry Leyland. The Blackburn goalkeeper had two hectic seconds of activity, saving one from John Connelly and then via an irresponsible back pass from Ronnie Clayton. Blacklaw had far more exciting moments that came his way.

Blackburn shadowed Jimmy McIlroy throughout the game and at one point the home fans called for his dismissal after Derek Dougan went down with an injury. The Burnley reporter at the game said of Dougan: “However, if a player is so inconsiderate as to risk leg injuries by refusing to take elementary precautions for protection, then he is inviting trouble. And Dougan made the most of it.”

That was in the first half and he was stretchered off with news that he would not resume until the second half. The centre forward, who would go on to hand in a transfer request on the night before the final, waited until the teams were out and ready to kick off before making his dramatic entrance.

Overall it was ninety minutes of scrappy football and it was no surprise that it all ended at 0-0 with extra time to follow. Then, 13 minutes in to extra time came the first goal from Peter DOBING and after Burnley had pushed Brian Miller up into the attack came a second from Ally MacLEOD. The game was up, and Burnley were left with just the league to play for whilst our opponents moved into the last four of the cup.

We needed some good news and we got some from another Lancashire club Preston. On the same night they travelled to Molineux and did us a massive favour by holding Wolves to a draw.