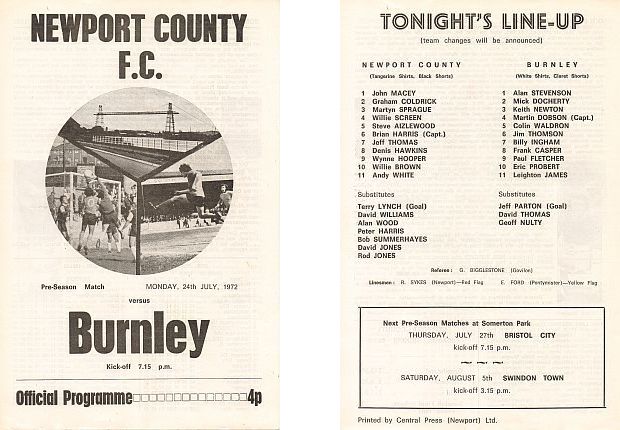 Burnley’s class of 1972, having won 2-1 at Swansea City two days earlier, ended their short stay in South Wales with a 1-1 draw against Newport County at Somerton Park.

Monday night in Wales was ruled out for me. In truth, I was probably still recovering from the long day on the Saturday and the journey to and from Swansea, but for those who were there they saw the Clarets make just one change from the team that had beaten the Swans at the Vetch Field. Dave Thomas had been left out of all the games after the Easter shenanigans at Blackpool and that had been his only full ninety minutes since February. He was nowhere to be seen at Swansea but, at Newport, was given his chance, replacing Frank Casper in that one change. “We want to see how he fits into the side,” manager Jimmy Adamson said. “It will give us the opportunity to play two wingers. I’ll be looking for a performance from the team as impressive as Saturday.”

For the second time in two days Burnley came up against a 1968 FA Youth Cup winner. Swansea had fielded Peter Jones at right back and lining up for Newport at centre forward was Willie Brown. Brown made just one first team appearance for Burnley, coming on as a substitute at West Brom in 1968, ironically for Thomas. He signed for Carlisle in the summer of 1969 but moved on to Newport a year later and had been a prolific scorer for them in his first two seasons.

He thought he’d given Newport a first half lead too against his former club only to be pulled up for a harsh handball but when the first goal counted it went Burnley’s way with Leighton JAMES latching onto an error from former Evertonian Brian Harris before hammering home past John Macey. Newport and BROWN weren’t to be denied though and when the pacy striker surged past Keith Newton he gave Alan Stevenson no chance with a shot from close range to earn his side a draw.

For the second game in succession, Paul Fletcher was singled out as our best player, this despite him not being on the scoresheet. Mick Docherty, whose dad caused something of a stir when he turned up to watch him, also had an excellent game. Adamson said: “We should have won but we missed a lot of good chances. We seemed to be too anxious in the penalty area. Newport were a difficult side to play against. They fought all the way, it was like a cup tie for them, and we didn’t want to risk any injuries. The pitch was very bumpy, which didn’t make it easy to play good football, but in general it was a good work out. The defence, as a whole, played well and Keith Newton had another outstanding game. The two match tour has been an undoubted success and I’m delighted with the way it has gone.”