Dyche and Wolves arrive at the Turf

Wolves should have been at the Turf tomorrow for what would have been the penultimate home game of the 2019/20 season, but with football still ruled out for the foreseeable future we take a look back to seven seasons ago when Wolves visited Turf Moor for a Championship game in what was Sean Dyche’s first game in charge of Burnley.

Below is my report from the game between Burnley in 14th place and Wolves who were eighth an four points ahead of us. 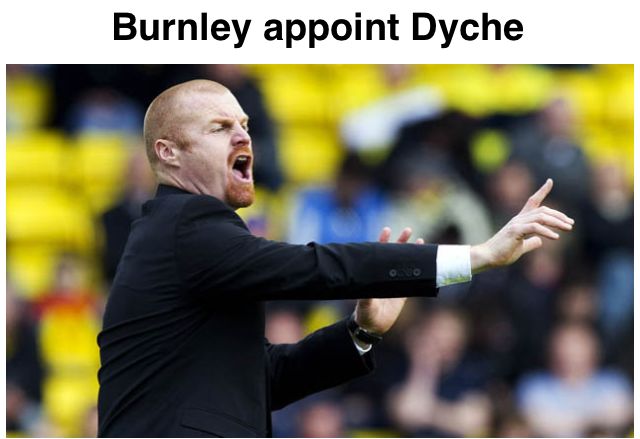 Once again at Burnley, for the third time in under three years, it was the day of a new manager as Sean Dyche took charge of the Clarets just five days after his appointment was confirmed. It’s always a time that’s both exciting as well as concerning. Have we got the right man? Will he bring about a change of form? How will we play? What will his first team be?

Most of those questions will be answered over a period of time but we got the first team news about an hour before kick off. As expected, Ben Mee, free from suspension, replaced Joseph Mills who had done himself no favours with his performance at Cardiff. Chris McCann was ruled out with an injury, believed to be a hamstring problem, and with Marvin Bartley still not fit it meant a place for David Edgar in midfield. The only other change saw Junior Stanislas left out for the first time this season with Ross Wallace preferred.

I was still absorbing that news, and trying to work out exactly what formation we’d play as I got into the ground where, before kick off, a minute’s silence was observed ahead of next week’s Remembrance Sunday which also gave supporters the opportunity to pay respects to former Claret John Connelly who passed away nine days earlier.

Prior to that, Dyche had come out to warm applause from the three sides of the ground housing home supporters and the suited, but claret and blue tie wearing, new manager responded as he walked across to take his place in the home dug out for the first time along with new recruits Ian Woan and Tony Loughlan. It goes without saying that we wish them all the best. We, as supporters, want exactly what they want, and that’s success for our football club.

We lined up in what was probably a 4-2-3-1 formation with Edgar joining Brian Stock in the two and Dean Marney in the middle of the three, flanked by Wallace on the right and Martin Paterson on the left.

Wolves looked like Wolves. In all the years I’ve watched football they’ve always been a big strong and direct side in their old gold and black. They looked no different yesterday even though they did play differently than any Wolves side I’ve previously seen.

I think it’s fair to say that the opening exchanges offered little indication as to how the game would turn out. A full 17 minutes had been played with very little to report other than a Wallace shot that flew just over after he’d linked up well with Edgar. Neither side had really taken the initiative and certainly neither side had really looked as if they might take the lead.

Wolves were passing the ball around whilst getting nowhere, a feature of their game for most of the afternoon, and were hardly offering anything going forward, but the game took a dramatic change when Michael Duff won the ball from a rather rotund looking Sylvan Ebanks-Blake.

He played the ball to captain Jason Shackell who in turn found Ben Mee down the left in front of the Longside. Mee played a delightful ball outside right back Kevin Foley. Martin Paterson timed his run across perfectly to gain possession in front of Foley. He was in on goal and as Carl Ikeme came out he placed it through his legs and into the far corner to give Dyche his first goal and take us into the lead.

Embed from Getty Images
The goal certainly lifted us and for the remainder of the first half we were very much on top. We defended well when we had to; we got players back in numbers when necessary and we certainly got forward at every opportunity. Chances were limited but there were no concerning moments until just a few minutes before half time when we, firstly, could have gone 2-0 up and then almost found ourselves pegged back.

Marney, who had such an impressive game, had the chance for us. It was similar to the goal in that it came from another excellent ball down the left from Mee. Marney then latched on to a mistake from Roger Johnson and found himself in a similar position to Pato when he’d scored. Ikeme did well to come out and close him down and Marney would probably have been better playing the ball across to either of the waiting Pato or Charlie Austin.

He opted for the shot but Ikeme saved and immediately set up a Wolves attack. It led to the huge Bakary Sako getting in right on the line to the left of our goal. He came in and hit a hard, low shot towards the far corner. It went wide but Ebanks-Blake was very close to turning it in at the far post.

Referee Mark Haywood brought the first half to an end at 1-0 and we were certainly deserving of being in front. We’d been the better side from the first goal onwards and, overall, I think Wolves will have gone in thankful to be only one goal down.

It was looking good, but the first half of games this season have tended to be better than the second halves. We went into this game on 17 points but if the half time scores in the games stood we would have been on 22 points. Add to that the fact that Wolves would surely be better in the second half. They’d looked anything but a side that deserved to be close to the play off positions.

Nothing did change to be honest, certainly not in the first twenty minutes or so of the half. We were still in the ascendancy and we got the crucial second goal. Austin had come close with a shot that almost flew into the top corner. It went just over but had it gone in, and Ikeme would not have got close, it would have been a real goal of the season contender.

Austin probably felt he needed a goal. He hadn’t scored since the 59th minute at Bristol, around two hours of play, but that particular drought ended just eight minutes into the second half and he won’t get an easier one all season. We won a corner on the left. Wallace hit it into the box and the league’s leading goalscorer was left unmarked to head home. It was as simple as that and Charlie stormed off towards the Longside as the old gold inquest started in the penalty box.

As we restarted the game I had no worries that the points were ours. We were head and shoulders better than this Wolves team but they did start to get themselves back into the game. At 2-0 down you expect a side to push players forward and they did just that and they were inches away from reducing the deficit when Sako thundered a shot against the right hand post. It should never have happened. There’d been a foul on Shackell, I think, but the by now bizarre referee let it go. Ebanks-Blake should have done better with the rebound but he fell over as Burnley players closed in on him.

We needed a goal to put the game to bed and Johnson, not the most popular player with the Molineux fans, almost gifted us one. His poor clearance found Marney who promptly headed it forward to Austin and we all waited to jump up and celebrate goal number three. We’ve just come to expect Charlie to score in that position but this time his shot lacked both power and direction and was an easy save for Ikeme.

Wolves had to keep going forward but we never really gave them another sniff at goal. Dyche said we showed the qualities needed when not in possession.

Embed from Getty Images
It was still 2-0 at 90 minutes then up came the board showing seven extra minutes. There were no complaints, most of it was added on when Wallace was down injured and had to be stretchered off. We saw those seven minutes out with no worries and former Wolves man Sam Vokes, on as a sub, came close to adding a third.

Burnley beating Wolves at home is such a rare occurrence, it is something to be celebrated. For Dyche it was as good a start as he could have wished for. He’s the first Burnley manager to win his first game since Stan Ternent’s Burnley beat Bristol Rovers in August 1998.

It had been a difficult start for him because of the injuries in midfield, but well done to Edgar who did ever so well alongside Stock. But there were good performances all over the pitch. Mee won the man of the match at the ground but he himself said any one of about six players could have won it.

My choice was Marney. I thought he had an outstanding game playing in that advanced role. Yes he should have done better with that one opportunity in front of goal but overall he did really well.

It’s just three points but it’s something for the new manager and his team to build on. He’ll know that bit more about some of his players now and we’ll certainly be hoping he can continue his good start when Leeds come calling on Tuesday, another team we don’t beat anything like often enough.