With manager Harry Bradshaw having departed for Woolwich Arsenal in 1899, Burnley turned to Bolton Wanderers director Ernest Mangnall to manage the club as we prepared to move into the twentieth century. 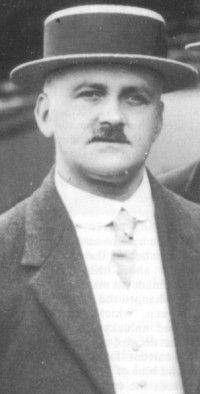 The former Lancashire FA goalkeeper took over a side that had just recorded its highest ever finish in league football, but it was a side that was ageing and although he was able to bring in some new players, most notably former England forward Edgar Chadwick from Everton, we suffered our second relegation in three years. Only Glossop North End finished the season below Burnley, and the two clubs were replaced by The Wednesday and Bolton Wanderers in the First Division.

Things went from bad to worse and before the next season kicked off in the Second Division goalkeeper Jack Hillman was suspended for a year for offering bribes. It proved to be a decent enough season. We led the league for a while and looked as though we would return to Division One at the first time of asking. However, a disappointing run in saw us finish third and miss out on promotion.

That was better than the following two seasons, a ninth place finish in 1902 was followed with Burnley ending the 1902/03 season in the Football League’s bottom position, behind Stockport County on goal difference. We were faced with applying for re-election and thankfully retained out league position.

Mangnall’s time at Burnley was at an end after four seasons and despite his poor record in charge he was appointed manager of Manchester United. He became a huge success with them, winning promotion three years later and going on to winning two First Division championships with the Manchester club remaining the third most successful manager in their history behind Sir Matt Busby and Sir Alex Ferguson.

He was with Manchester United for nine years before moving to their close rivals Manchester City where he remained for a further twelve years although a second place finish was his highest and that was in 1920/21 when they finished runners-up to Burnley.

Overall, his involvement in football in Manchester is considered significant in that he was the instigator in United’s move to Old Trafford and then City’s to Maine Road. He remains to this day the only person to have managed both clubs.

Ernest Mangnall was also very much part of the setting up of the Central League (reserve league) in 1911 and was also involved in founding the Football Managers Association. He passed away in 1932 at the age of 66.