The sad news has reached us today of the passing of former Claret Jimmy Robson at the age of 82, another of our 1959/60 title winning team to leave us.

Jimmy joined Burnley way back in the mid-1950s, and initially played for our colts team, which played its home games at Towneley, before moving on through the B and A teams and then the reserves. 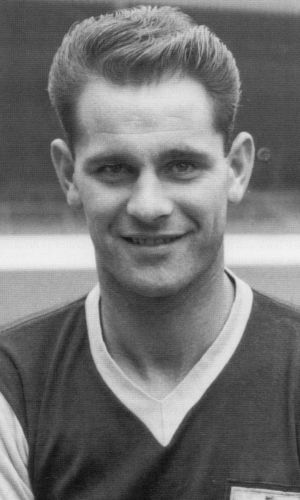 He signed his first professional deal on his 17th birthday in January 1956 and by the end of the year had made his first team debut in a home game against Blackpool. We were 2-1 down in that game after just eleven minutes but Jimmy did what Jimmy did and netted an equaliser some ten minutes from the end.

It was the first of his one hundred goals for Burnley over a period of just over eight years. It included five hat tricks, the first of them coming against Chelsea at Stamford Bridge and the last at them same ground some 21 months later. One of those hat tricks saw him score five times in the 8-0 demolition of Nottingham Forest in November 1959. It also included the Wembley goal in the final of the FA Cup in 1962, the 100th goal scored at Wembley in the competition.

The 1960/61 season proved to be his most prolific. He played 54 times that season in league and cups, scoring 37 times including our first ever European goal in the first minute of the home leg against Reims, one of three he scored in the European Cup. He was very much a natural goalscorer and Jimmy McIlroy, his inside forward partner, once told me that he loved him being in the team because he knew he would be there to get on the end of his passes into the box.

He went on to play for Blackpool, Barnsley and Bury before returning to Burnley in 1973 to play for the reserves and help the young players coming through, and it was very appropriate that a career in football that ended in 2004 should do so at Burnley where, for six years, he’d been involved with the youth department under Stan Ternent’s management.

I was just a star struck youngster when I first spoke to the quietly spoken inside-forward. That was back in the day when we congregated outside the ground on training days trying to secure autographs for our immaculately kept scrapbooks.

There were a couple of players at the time who were not too keen on signing but Jimmy was very definitely not one of them. He was brilliant with us and on one particular day he was given a strong talking to by the club secretary for telling us all to go inside to keep out of the rain.

It was in more recent years that I really got to know him, and I was able to invite him to a couple of dinners just over a decade ago. The first of them was our Bad Beat Banquet in 2009 and I don’t think there was anyone more enthusiastic when it came to our fundraising ‘Play Your Cards Right’, encouraged, of course, by a certain Mr McIlroy who was just as keenly instructing him to go higher or lower.

It’s almost six years ago that Ray Pointer, his fellow forward at Burnley, passed away. I just happened to see Jimmy shopping on the following day and the chat obviously turned to Ray. Jimmy said that the last time he’d seen him, Ray hadn’t even recognised him. That had upset him so much, but he remembered Ray so well, he remembered his goals. Jimmy was like a memory man then and he once told me, and he didn’t know why, that he could always recall headed goals more than any other.

It is so unbelievably sad that Jimmy should have suffered in the same way as his old friends McIlroy and Pointer in recent years. We’ve known about it through his daughter Dany who has been a rock for her dad. He was with Dany on the last occasion I saw him, enjoying a coffee in Costa.

A native of the northeast, he made his life in Burnley with his wife Beryl and their family although Beryl sadly passed away some years ago. Apart from being a great goalscorer, I would describe Jimmy as a gentleman and he certainly had no edge to him. His love of football never left him nor his support of Burnley Football Club and Turf Moor has been a sadder and emptier place without him.

My thoughts are very much with Jimmy’s daughters Melanie and Dany, his sons Craig and Gavin, their families and all of Jimmy’s friends at this sad time.