Back in January 1999, Stan Ternent signed Micky Mellon from Tranmere Rovers with the midfielder making his debut in a 4-3 win at Bristol Rovers. 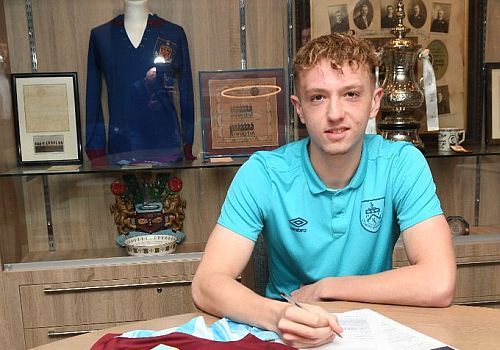 Just over two years later he returned to Tranmere but later, at the end of his playing career, coached in our centre of excellence before leaving to become manager of Fleetwood in 2008.

Move on a few years and there was a Mellon back at Burnley, his son Michael, a young striker in our academy. He first came to prominence when he was named in the youth team squad that, sponsored by Up the Clarets, played in the CEE Cup in Prague scoring our goal in a 1-1 draw against Altinordu FK.

He was just 15 then and a year away from beginning a two year scholarship but he’s progressed rapidly and had become an important member of the under-23s this season until injury interrupted. Even so, he’s scored eight league and cup goals at under-18 level and a further ten with the under-23s.

Coming out of his scholarship at the end of the season, and having celebrated his 18th birthday in December, he’s now committed to the Clarets until the end of the 2024/25 season with his first professional deal.

A delighted Mellon, whose dad played over ninety times for us, said: “I’m really happy to get it done and extend by stay at Burnley, I just want to kick on now and keep scoring goals. I see my future being at Turf Moor and my ambition now is to work hard and get as close as I can to the first team.”

Sean Dyche said, after Mellon followed Lewis Richardson in signing a long term deal: “We’re pleased with Michael’s progress. He has developed well over the past few seasons and is still developing. He’s working with the under-23s. We will continue to monitor him and we look forward to working with him.”

We wish Michael the very best.