First visit to new Spurs home is not one to remember 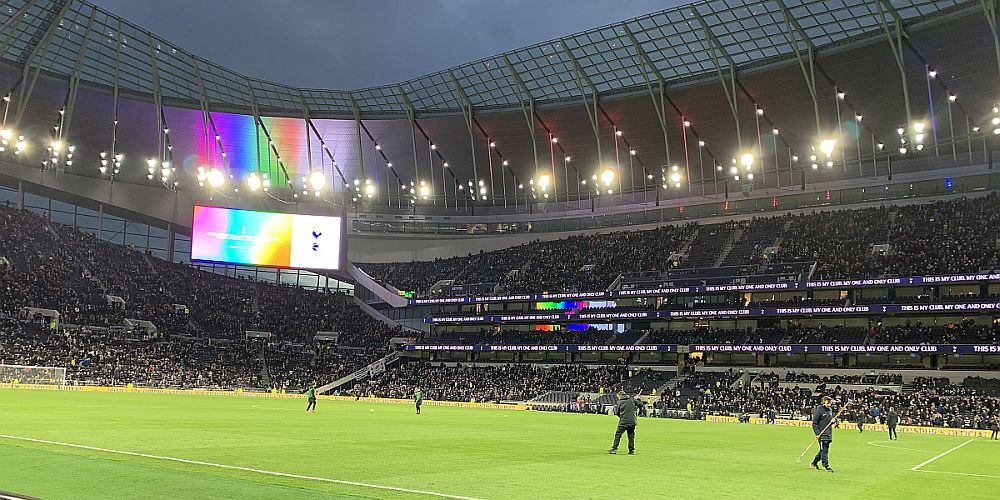 It was ground ticking day yesterday with our first ever visit to the new Tottenham Hotspur Stadium, our first new ground for a Premier League game since we visited the London Stadium for the first time in December three years ago. This was one we won’t want to remember after suffering a dreadful 5-0 defeat at the feet of a rampant Spurs’ side.

It was all done and dusted really with less than ten minutes gone as we went 2-0 down. We conceded another in the first half that was probably on a par with the goal Tommy Cummings scored against Newcastle on the Turf in 1952, before conceding two further goals in the second half on a day when Kevin Friend’s final whistle proved to be a relief for those Burnley fans still inside.

I do enjoy away trips, not so much when we are on the wrong end of a scoreline like this, but when you leave home around 6:30 and Match of the Day is well underway when you reach home, there is far more to the day than the ninety minutes of football and this was one of those days when we were thankful for that.

After the train journey to Watford it was back to the car for this one with pick ups in Barrowford and Shelf near Halifax but it was an easy journey down with a breakfast stop in Northamptonshire before reaching our Waltham Cross destination in very good time to make the short train journey to Northumberland Park and the short walk to the stadium.

This is not intended to be a stadium guide but we had a walk all the way round the outside, have a look inside their store before making our way in through the futuristic looking turnstiles and finally to our seating area.

Embed from Getty Images
I new they’d installed some rail seating and it looked to me as if all of the away fans section had been done like that. Given we were standing for the entire match, and given the problems I have at times with that, I have to say the rail is a blessing for me and the sooner this is installed right across English football the better it will be.

The line up I predicted on Friday in my preview wasn’t exactly correct. I suggested Charlie Taylor and Ashley Westwood would miss out; they did. I also suggested that Phil Bardsley and Ashley Barnes would be fit to play; they weren’t. That meant we brought in two of our younger players to make up the numbers on the bench. Anthony Glennon, the under-23 team captain, was one of them alongside midfielder Mace Goodridge who is still making his way back to full fitness after a year out with a cruciate ligament injury.

Things didn’t start well. With only three minutes on the clock I dared to suggest that Spurs had come out with the intention of getting in front early in the game and that I wouldn’t be surprised if we conceded very quickly. It was quicker than I thought. Within seconds of that, we had fallen behind. You can’t take anything away from Harry Kane’s finish but Matt Lowton gave the ball away cheaply to allow it to happen.

Lowton, who returned to the side and had a nightmare of an afternoon, was similarly guilty again five minutes later. This time it was a scrambled affair with Lucas Moura finishing from almost on the line. We had to wait for the nonsense called VAR and we had to wait for far too long but the goal was quite rightly given and the mountain we already had to climb now looked like Mount Everest.

You need a bit of luck if you are going to get back into the game. We might not have been deserving of too much of it but it was very much against us when Robbie Brady’s header came back off the woodwork. A goal then for us might just have changed things. We will never know.

Embed from Getty Images
Jay Rodriguez headed straight at Paul Gazzaniga, a goalkeeper we tried to sign from Gillingham a few years ago, but then came the goal that really did end the contest. From a Burnley perspective you have so many questions to ask as to how it was allowed to happen. From a Spurs or a neutral viewpoint, you just sat back and took in the moment of a goal that you aren’t likely to see very often and it all came from a Burnley free kick.

We won that free kick in the centre circle. It was played up to James Tarkowski who had gone up into the Spurs’ penalty box. He didn’t win it and the ball was pushed out to Son Heung-min who took control of the ball no more than a yard outside his own penalty box. He then proceeded to run the full length of the pitch before sliding the ball home past a helpless Nick Pope.

Oh yes, he should have been stopped. Dwight McNeil should have taken him out and maybe Erik Pieters although by then there might have been red card concerns. No way should we have let Son do that, but my word, what a goal it was. I saw a certain Jimmy Greaves score some outstanding goals against us at the old White Hart Lane. I have to say that one is right up there.

Jay Rod missed a good chance before half time and a first half, in which Spurs had also hit the post, ended with us facing a big scoreline with us already 3-0 down.

I can’t say there was anything to get excited about in the second half. Kane got his second, again after Lowton had given away the ball, and Moussa Sissoko added number five; this time the culprit was Jeff Hendrick.

Embed from Getty Images
It had long been the end of the game for us and I don’t think we offered much at all after the break although I have to mention our second substitution that saw Aaron Lennon come on for Brady. Now I know Lennon is an ex-Tottenham player and I know how popular he was with their fans, but the reception he received yesterday was incredibly. It reminded me of a couple of receptions our supporters gave former players Alan Stevenson (Rotherham) and Martin Dobson (coming on as a sub for Bury).

It was a relief when the final whistle blew. It’s the fourth time we’ve lost a Premier League game 5-0, the third time in North London and the second time at Tottenham. It’s not fun, I can assure you, and long before the end I was ready for home.

You have to get it all out of the system when you’ve a long drive ahead of you. We were back on the M25 by 6 p.m. and by then the discussions on the game had all been put to bed which enabled a good journey home.

I have watched Match of the Day, I’m not sure why but I won’t be taking any more time to see what happened. What I do know is that we need some of our injured players fit again and we need a result. No matter how good Spurs were yesterday, and make no mistake they were very good, our performance was just not good enough.

But I can always say I saw that Son Heung-min goal. I just wish it hadn’t been against us.