Floods at the Bee Hole End but more away points

Burnley had welcomed in the 1960s in traditional style with the football team preparing to head for London and a game against West Ham United as they looked to get back to wining ways after the drubbing against Manchester United on the previous Monday.

The big news, as always in those days, was the arrival of the New Year babies at Bank Hall Maternity Hospital. The first arrival was born six hours into 1960 and was a 7lb baby girl born to Bacup mum Mrs Barbara Duckworth. The first Burnley baby arrived five hours later, another girl called Lesley Boothman who would soon be flying out to a new life in Malta. 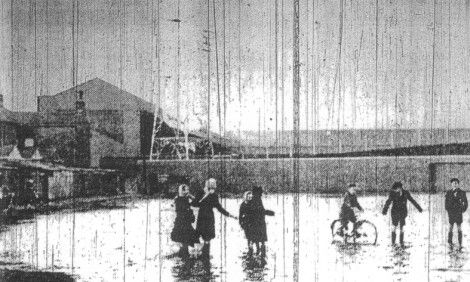 Mayor Councillor Edith Utley was serving the town well but the New Year brought with it news of who would replace her. Alderman Thomas Holgate celebrated his 55th birthday on 1st January as his selection as the next Mayor was announced. His wife Mary was set to be the new Mayoress.

There was a shock in town with the sudden passing of Sir John Howarth Grey a local industrialist who had given a lifetime of service to the town and to cotton. The 84-year-old had a short illness just before Christmas but seemed to be on the road to recovery when he suffered a relapse on New Year’s Day and died.

There had been suggestions that the town’s war memorial should be moved from its current position in Towneley Park to an area close to the central library in town. The Council confirmed there were no plans to move it and it would stay in the park.

The weather always seems to be at the forefront of the news in Burnley and there was great news when it was revealed that, following the latest deluge of rain, Hurstwood reservoir was now full. That weather had again caused flooding to the waste ground behind the first row of houses on Brunshaw Road, just past the Turf Moor football ground. The picture above shows children in the area which a few years later was landscaped to bring and end to the constant flooding.

Whilst the first team were in London there was good news of three other players who were playing more locally. Three broken leg victims were all playing comeback games for the ‘A’ team against Manchester United at the club’s training ground at Gawthorpe. David Smith had already played some games, as had Trevor Meredith, but this was the first game back for England goalkeeper Colin McDonald, his first action since breaking his leg in March playing for the Football League against the League of Ireland at Dalymount Park in Dublin. A very healthy crowd turned up at Gawthorpe to see McDonald’s comeback and he kept a clean sheet in a game that ended 0-0.

As for the first team, Jimmy McIlroy was again absent and again Ian Lawson deputised at inside right for the game at West Ham with Burnley hoping to gain revenge for a 3-1 home defeat against the Hammers in August. They did just that, winning by five goals to two.

Burnley made it their third successive away win, rounding off their season’s league visits to London with a resounding victory over West Ham United in the Boleyn Ground mud bath. It was a great performance, and once again the emphasis was on team spirit coupled with the realisation that Lawson on a heavy pitch is an admirable solution to any problems which might arise through doubts about the fitness of McIlroy.

Again the whole side impressed with a combination of power and punch, and the ability to adapt themselves for unexpected underfoot conditions. For the pre-match appearance of the pitch provided a profound shock, a stretch of grey-brown mud, gleaming palely under weeping skies in the drizzle of a gloomy afternoon and looking for all the world as though it was the bed of a newly drained duck pond.

Having more order and variety in their attacks it was not surprising when Burnley took the lead. Ray Pointer and Lawson bamboozling the whole of the United defence, gliding through and LAWSON being in position to finish the move and then retiring to the touchline to have wiped out of his eyes, not tears of joy but mud.

Within a minute Phil WOOSNAM equalised with a sudden hard shot at which Adam Blacklaw stuck out a hopeful boot as he slipped in a well trodden goalmouth from which signs of sawdust had been obliterated. Brian Pilkington then received a pass from the defence, galloped gaily through in the inside left position from inside his own half, was partially checked by a tackle near the 18 yard line and recovered possession. Noel Dwyer emerged from goal and PILKINGTON still in full cry lofted the ball over his head and into the net, a brilliant solo effort which sent the Burnley contingent in the stand into transports of delight.

Then Lawson showed initiative and ball control in weaving in from the right and John CONNELLY added the finishing touch to enable his team to cross over at half time with a deserved two goal lead.

The second half will be remembered for two inadequacies – that of the Boleyn Ground lighting system (floodlighting is something of a misnomer in this instance) and some failures of the referee to disabuse the crowd, and more particularly the players, of the view that he had a weakness for giving decisions which were shrouded in mystery. The ‘lights’ on the side opposite the stand were composed of four ‘batteries’ of four each with a double line of five at each corner, barely adequate in the gathering gloom and merely showed a shining reflection in tiny pools on the sodden, trampled pitch.

However, the official’s decisions in some respects were more serious in their application to the affairs of the match. His first was the disallowing of a perfect goal from a free kick which he ruled was indirect and therefore could not be scored by the player on the ball. As far as could be seen, no signal to this effect (raising the right arm) was given, so Jimmy Adamson and Bobby Seith, who worked the double act assumed that it was direct, and the skipper lifted the ball over the defensive wall past Dwyer and into the net. To the apparent amazement of even the home players the goal was disallowed. Burnley weren’t to be denied and LAWSON smartly netted Burnley’s fourth from Pilkington’s header into the centre.

Then in the next West Ham attack the referee stopped play and pointed to the penalty spot and no one knew why. Adamson asked the reason after Noel CANTWELL had netted and said that he had been informed it was for a deliberate push. But the final goal went Burnley’s way and was a minor triumph for Blacklaw as he was the contributor to the success. He cleared up the wing from his mud patch kingdom and CONNELLY drove a long, hard shot which swerved in by the far post to the intense surprise of Dwyer who viewed the whole affair with distinct astonishment.

And so the final whistle and the dash for the train as some West Ham fans discussed the penalty in ‘cockney’ which was as forceful as it was picturesque. The win meant Burnley had won only one point less away than at home.

The result took us above Preston on goal average and into second place in the table although we were three points behind leaders Spurs. Birmingham and Luton remained in the relegation positions although Luton, after a draw against Leeds, were bottom only on goal average.

Unfortunately there was no good news for the reserves who went down to a 2-0 home defeat against Bury with Robertson and Pollitt scoring for the visitors.

« Oldham move for N’Guessan
Cooney and Phillips both join Morecambe »