The early news to come out of Turf Moor following the defeat against Torquay United in the 1991 Division Four play offs was that manager Frank Casper would still be in charge for the 1991/92 season and he wasted no time in prepararing the retained list which saw four players released at the end of their contracts.

Casper was out of contract but the Clarets were quick to give the former player a further year after coming so close to a promotion. “We want Frank to finish the job he has started for us,” said chairman Frank Teasdale. “We felt that this season we fell at the last hurdle and we also feel that the manager should be given the opportunity to see things through. He knows the situation and, as ever, he will have the full backing of the board.” 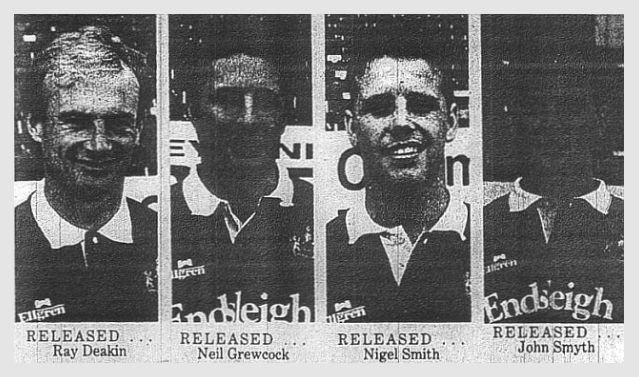 Casper was delighted with the news and said: “I’m here to do a job. I was brought here to do that job and I am pleased to have been given another contract to finish it off. Everybody is disappointed that the season did not bring promotion, but it’s the best season we have had in the Fourth Division. Compared with the last two seasons it was excellent. I have been given another chance and over the next 12 months we will do it. Jimmy Mullen will also be stopping on as my assistant and that is very important for the club. He has only been here for 12 months but has already made a big impression. He has done a great job for Burnley Football Club.”

With his position secure for another year he turned to the playing staff with four being given free transfers. Two of them were players who had played little part in the first team but the other two were the club’s longest serving players. Midfielder Nigel Smith had been at the club for two years but made little impression whilst defender John Smyth hadn’t featured at all in his one year at Burnley. Both were released as were club captain Ray Deakin and winger Neil Grewcock, the last two surviving members of the team from the Orient game four years earlier. Casper admitted that letting Deakin go had been a difficult decision, but Grewcock had struggled with injury for three years.

Grewcock was, at the time, our longest serving player. He’d been with Burnley for seven years and had played over 240 games in that time but an injury in the 1987/88 season affected him for the rest of his time with the club. He didn’t play much in either of the next two seasons but had started almost half of the league games in 1990/91. His departure ended his league career at the age of 29.

Deakin had been with the Clarets just a year less than Grewcock having become one of Martin Buchan’s summer signings in 1985. He’d passed the 250 game total and had been a regular in the team for much of the 1990/91 season. However, just short of his 32nd birthday, Casper released the former captain who, like Grewcock, had played his last game in league football.

Those last two surviving members of the Orient game had been influential players for us with both playing a part on that dramatic day in 1987. Deakin captained the side and Grewcock scored the oft forgotten opening goal.

Nine other players were out of contract but all were offered terms for the new season as was young striker Graham Lancashire who had just ended his apprenticeship and had been involved with the first team in the closing weeks of the season. The nine to be offered new terms were captain Steve Davis, fellow defenders Ian Measham, Jason Hardy and Neil Howarth, midfielders David Hamilton, Joe Jakub and John Deary and forwards Peter Mumby and Danny Sonner.