On 19th January 1983, we had a Milk Cup quarter final at Spurs and with Brian Miller relieved of his duties that morning the directors turned to Frank Casper to take responsibility for the team at White Hart Lane. 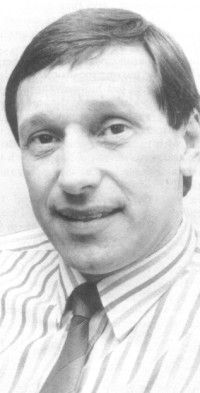 Within hours of taking over he sat in the dug out at Spurs and watched his side score a sensational 4-1 victory and was immediately told the job was his for the remainder of the season. At the time we were facing a battle to avoid the drop to the Third Division but were, incredibly, still in both cup competitions.

Barnsley born Frank had been with the club for almost sixteen years. He’d been signed from his first club Rotherham United in the summer of 1967 and became Burnley’s first money signing since Alex Elder had arrived from Glentoran in January 1959. He was a member of the side that won the Second Division in 1973 and did so well on its return to the First Division although he suffered two bad injuries during that first season back in the top flight. The first came against Spurs at home and, having recovered and won his place back in the team, he was cruelly kicked out of the game by Norman Hunter as the Clarets recorded a stunning 4-1 win against Champions elect Leeds United at Elland Road. After a long battle to get fit, which included six more games and one goal, his hundredth in league football, in the 1975/76 season, he was forced to hang up his boots after which he joined the club’s coaching staff.

On the Saturday after the Spurs win he found his first league match in charge was against his home town club Barnsley at Turf Moor who at the time were managed by Hunter. Who could blame Frank for snubbing him? Billy Hamilton gave him a dream start with a first minute goal and Casper got a 3-1 win.

That was the first of four successive league home wins although, during that run, we went out of the Milk Cup in the semi-final whilst reaching the last eight of the FA Cup. With fourteen games to go we had climbed out of the bottom three but a shocking run over the Easter period, with five successive defeats, dropped us right back and we never fully recovered. Ultimately we needed to win our last game of the season against Crystal Palace at Selhurst Park. If we won it, they went down, but a defeat or a draw would see us relegated. We went and played a negative game and lost it 1-0 having had only one shot at goal and that from substitute defender Vince Overson. After just one year we found ourselves back in the Third Division.

He’d made just the one signing in Terry Donovan who had repaid him with six goals, all in key games that were either won or drawn, and with Brian Laws injured for the final three games be brought in youngster Lee Dixon for his debut as Laws’ replacement. Frank was then given the responsibility of dealing with the retained list and out went players such as strikers Paul McGee and Steve Taylor and midfielder Tommy Cassidy. He also brought to an end the Burnley career of his former team mate, goalkeeper Alan Stevenson. He’d been left out for the final five games of the season and departed having made 438 league appearances, a total that was just one short of the club’s post-war league appearance record held jointly by John Angus and Jimmy McIlroy.

We’d won as many games as we’d lost under Casper but, with relegation confirmed, the directors decided to look elsewhere for a new manager. Chairman John Jackson confirmed there would be a break with tradition and a manager would be brought in from outside, something that hadn’t happened since Harry Potts was brought back to the club in 1958.

Frank’s time at Turf Moor was drawing to an end. He’d been so popular as a player and had come close to reaching his targets during his short time as manager. But after the most remarkable of seasons of huge highs in the cups and lows in the league we were set for a new man to come in from outside of the club.

« Brady to remain with the Clarets
New York – New York »