In January 1983, Frank Casper replaced Brian Miller as manager of Burnley Football Club on the day we sensationally beat Tottenham Hotspur 4-1 in the Milk Cup, and just six years later exactly the same happened with Frank returning to Turf Moor from Bury to take over as Miller became chief scout.

After losing out to John Bond for the job in the summer of 1983, Frank was out of the game for a few months but returned in the spring of the following year when he joined Bury as assistant boss to Martin Dobson who had taken over as player manager. He remained at Gigg Lane until the call came from Burnley at the start of 1989 and he stepped back into the Turf just in time for a home game against Halifax, a game we won 2-1 courtesy of two goals from George Oghani. 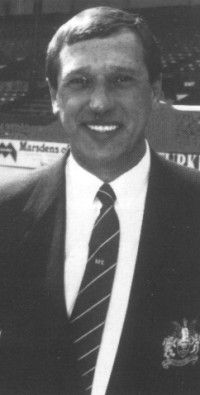 The season had already started to slide and Casper couldn’t arrest it. We finished in sixteenth place and things were no better in his first full season in charge which ended with us in the same position having scored less than a goal per game. Regular supporters were really put through it and no fewer than seven of the home games during that league season ended in 0-0 draws whilst we failed to score in another three home defeats.

Casper though was building a squad capable of challenging at the top of the league and getting us out of it. During that first season and a half in charge he’d signed players such as John Deary, John Francis and Roger Eli, and early in the following 1990/91 season central defender John Pender arrived. He’d brought in Mick Docherty as his assistant manager, but we lost him in the summer of 1990 when he was poached by Hull City boss Stan Ternent for the assistant’s job at Boothferry Park. His replacement was a grey haired Geordie by the name of Jimmy Mullen who had just lost his job as Blackpool manager.

For the first time there was some confidence that we could climb at least back to the third tier of English football and, had we been able to pick up a few more wins away from home, we might well have gone up that season. We had to settle for a place in the play-offs but that ended in a semi-final defeat against Torquay when Frank did himself few favours down at Plainmoor in the first leg.

He lost captain and centre half Steve Davis in the summer to Barnsley, and replaced him with Steve Davis from Southampton, a player who had spent a short time with us on loan a couple of seasons earlier. He signed a striker from Reading who had struggled to find the net by the name of Mike Conroy and Steve Harper arrived from Preston. Just a couple of games into the season he made his last two Burnley signings, bringing Mark Yates from Birmingham and taking Nottingham Forest goalkeeper Andy Marriott on loan.

We did get some early wins under our belt in 1991/92, including one against Aldershot that was later expunged, but our last three games in September 1991 all ended in defeat against Hereford, Rochdale and Scarborough with the Rochdale defeat at home coming when our own goalkeeper David Williams had an inspired day playing on loan against us. Just days after that Scarborough defeat, Casper dropped a bombshell by handing in his resignation. According to reports he’d not been pushed into it, it was his own decision, and he left the game to set up a leisurewear company with the club’s former marketing manager Joyce Pickles.

His record during just a few months short of three years maybe doesn’t look that good and there is no doubt that his time as manager will not be remembered with much affection by Burnley supporters. There were often cries of Casper Out, particularly during the 1989/90 season and towards the end of that season I can recall the front cover of a copy of the fanzine No Nay Never featuring a picture of prisoners on the roof during the Strangeways riot with a nicely designed ‘Casper Out’ banner added. Looking at it though, like Miller before him, he did eventually leave us somewhat stronger than he found us, certainly in terms of the squad of players at the club, a squad more than strong enough to get us out of the Fourth Division.

Frank Casper hasn’t worked in football since. He continued with the leisurewear company and through that he again had contact with the club when they supplied the kit for a period starting with the 1999/2000 season. Now aged 75, he still lives locally and can often be found socialising with a number of his former team mates from the 1970s.