The sad news has just reached us of the passing of former Burnley full back Fred Smith after a brave fight against illness. 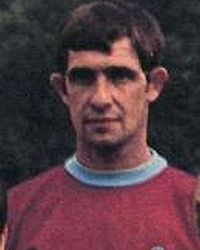 Smith joined the Clarets as a youngster in late 1959, making his debut against Stoke City in 1963. He went on to play over 100 games for the club, and that was no mean achievement given he had John Angus to contend with in his position throughout his time at Burnley.

One period remembered fondly by Burnley supporters was the run of eight successive wins in the 1968/69 season. Smith came into the team for the first of those games, replacing Jim Thomson who had made his debut in the previous game. He played in all eight of those games and that season proved to be his best for the club, making a total of 29 league and cup appearances.

He moved on to Portsmouth in the summer of 1970 where he enjoyed three years as a regular before moving on to end his career with Halifax although he only made a small number of appearances.

Smith continued to live locally and was often seen about until not too long ago because of his illness. One of two post-war players to have been born on Christmas Day, he has sadly passed on just a few months after his 77th birthday.

Our thoughts are with his family and friends at this sad time.