Full backs in and out for the Spurs game

Last Monday saw left-back Erik Pieters stand in at right-back for Phil Bardsley who missed the game at West Brom because of a positive COVID test. 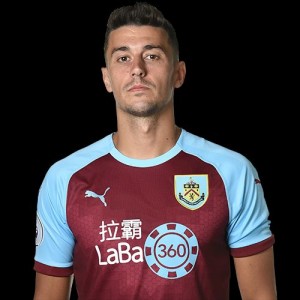 Bardsley is isolating so I presume that he is unlikely to be available for next Monday’s home game against Spurs but it looks as though Pieters could miss out too with a calf injury. There’s no need to hit the panic button though, there’s better news of Matt Lowton (pictured) who could be fit to return having suffered injuries in the League Cup defeat against Manchester City.

The big news is that no other injuries have been confirmed so we are getting closer to a full set, apart from the missing full backs. Ben Mee returned to training yesterday. “He is getting better but he’s not there yet,” said Dyche who added: “He will need a bit of an extended period because he’s been out quite a long time so we’ll have to look after that side of things.”

Mee last played in the 1-0 win at Crystal Palace in early July and that’s the same for Jack Cork. Dyche admitted again today that it was always going to be a long term injury but that he’s progressing and getting back into fitness although he has a way to go yet.

Bailey Peacock-Farrell is the other injury. Will Norris is expected to deputise as substitute goalkeeper.