There were more than 18,000 at Turf Moor for the Fourth Division’s game of the season as Burnley fielded a new goalkeeper in their top of the table clash against Blackpool on this day in 1992.

One young Burnley man was very fortunate to return home with nothing more than cuts and bruises. 19-year-old Jason Hill was close to home on the Brunshaw Estate when he was attacked by a gang of thugs. After punching and kicking him, they took his wallet containing £55. He didn’t recognise any of his attackers but said: “I’m glad it happened to me rather than a woman or an elderly person because I can look after myself, but you haven’t a chance when there are six of them and they jump you in the dark.” 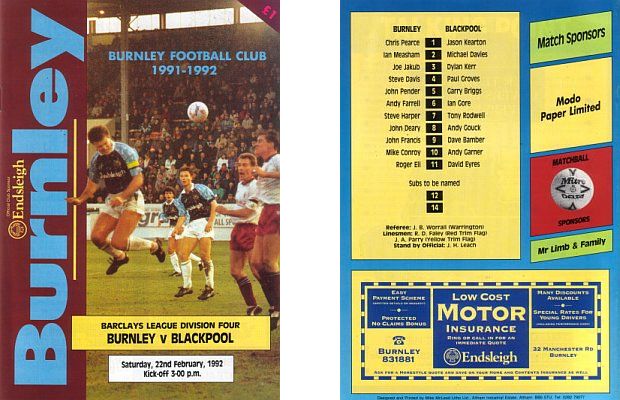 Things got worse at Trafalgar flats. Here a 21-year-old man was left with a fractured skull after taking a blow from a baseball bat. The search was on by police for the offender with neither they or the injured victim aware of any motive.

It really was a week for violence. Helen and James Stark were both maliciously wounded. The Deerstone Avenue couple’s son Dennis appeared before Burnley magistrates accused of stabbing his parents. He was committed to the crown court to appear on 19th March.

There was excitement in town when it was revealed that the trustees of one of Britain’s biggest and most influential museums was considering a move to Burnley. The town had been placed on a short list as officials of the Imperial War Museum sought an expansion in the north. The museum’s director, Dr. Alan Borg, said: “We are very impressed with what Burnley has to offer, but that doesn’t mean to say Burnley will be chosen.” He did, though, admit: “There is the interest in the Accrington Pals and the East Lancashire Regiment which made Burnley one of the obvious choices to be considered.” It was anticipated that a decision could be made within six weeks.

Last week, the old folk who were residents at Gorse Hill in Stephenson Drive marched to County Hall in Preston to try and fight the closure. It didn’t look as though they had won themselves much hope with Mrs Joan Humble, chairman of Lancashire County Council Social Services Committee, only promising that they wouldn’t be split up. She confirmed that the decision had been forced on them by Government cuts.

It was good news for one driver but not another. Paul Rydings of Brunshaw Road had his driving ban lifted by Burnley magistrates. He’d received a three year ban for drink driving offences but his defence explained to the court that he’d been experiencing medical problems.

However, David Stainsby of Albion Street had no such luck when he appealed to reduce a ten month prison sentence which followed being found guilty of driving with excess alcohol and driving while disqualified.

Other than the news from the Imperial War Museum, it hadn’t been the best of weeks although Councillor Enid Tate ordered council leaders to stop knocking the borough and start promoting a better image. “If we can’t say anything good about Burnley then we should leave it out,” she said. “We are selling ourselves short and should be promoting the town as the place to be.”

Her outburst wasn’t met with much approval, in fact with anger and derision from other councillors with Councillor Mike Cooney saying in reply: “If we have a poor image, then it is up to us to build up a good one and our action plan for the next year reflects the council’s intentions to work hard in boosting the town.”

One good thing in the town was definitely the football club which was sitting proudly on top of the Fourth Division and expecting a big crowd for the Lancashire derby against Blackpool who had now levelled on points having played two games more.

We’d lost 5-2 at Bloomfield Road in the previous month and manager Jimmy Mullen, who had previously managed Blackpool, said ahead of this encounter: “That result hurt our pride. We were caught cold it is a match the lads want to put behind them.”

He added: “The easiest way they can do that is to get the better of Blackpool this weekend. The right result against them would give us a cushion as we go into a very testing run of games. It is going to be a great derby and I wouldn’t be surprised if there are 20,000 or more at the game. That will give our lads a great lift and I hope we respond in the right way.”

Both John Deary and John Pender were considered doubts but both were there when the team was named and there was a new name in the line up too. When the locals went to press, there was no hint that a new goalkeeper was on the way but Burnley lined up with Nicky Walker in goal after he’d signed on loan from Hearts.

It was one of those days, a bigger than usual crowd, and a lot of moaning from the home fans at the end that we hadn’t won, that we weren’t good enough. Overall, Blackpool were the better side on the day so a 1-1 draw was very much a point gained. It was a good game but our opponents looked as good as any side we’d played and, with our games in hand, the draw was a better result for us than it was for them.

Blackpool started so well and were unfortunate to have a goal ruled out for offside. Their wide players Trevor Sinclair, who had come on as a substitute, and David Eyres were starting to cause us so many problems while Steve Davis and Pender, both of whom had magnificent games, were finding Dave Bamber and Andy Garner a tough pair to deal with.

We managed to get the half hour with the score at 0-0 and then Roger Eli got the better of Gary Briggs who then couldn’t get to him, neither could Groves. Roger Eli went on and on and in. It was a Roger Eli special. He just wouldn’t be denied. It was a terrific goal from Eli who shrugged off all the challenges before beating Jason Kearton with a shot from just inside the box.

If we’d been able to hold on to the lead for a while, then who knows? We didn’t. Blackpool were level within a minute when Bamber headed home a Sinclair cross.

Mike Conroy had a chance just before half time but Blackpool were the bigger threat in the second half. Davis cleared one almost off the line and only a superb Pender challenge kept them out after one good run.

With just a few minutes remaining, we were so close to a winner when both Eli and substitute Graham Lancashire were so close to getting on to a Conroy cross. It wasn’t to be but we got a point against a Blackpool side who played so well.

We came off, still top of the league, still above Blackpool on goal difference, with one less game to play and had played in what had been an outstanding game of football.

Mullen thought we’d fallen short on the day. “If we had played as well as we can do, we would have won,”  he said. “We didn’t, and on the balance of play over ninety minutes, we were a bit lucky to get a point. Blackpool will feel they should have won.”

He added: “Blackpool probably played as well as they had done all season but they still couldn’t beat us. As a manager I have to see that as an encouraging thing.”

Mansfield had moved back to third after a 3-1 win at struggling Aldershot but they remained five points behind us and Blackpool. Barnet were beaten 3-0 at Rotherham and were now fourth, ahead of Cardiff on goal difference and with one point more than Rotherham.

Doncaster drew 0-0 at Halifax which was nothing special other than it was a third game without defeat following wins against Aldershot and Hereford. The results hadn’t just taken them off the bottom but had moved them four points clear of Aldershot.